All that said, I was still surprised, actually thrilled to learn that one of the images he shot would end up on the cover of American Way Magazine - the in-flight publication for American Airlines. 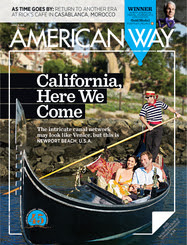 If you're local to Newport Beach, or have spent time on the water here,
you may be wondering where the photo was taken.
I received a sketched example of what the photographer wanted,
and went scouting - because what he wanted was almost impossible to find in this harbor.  Shoreline is so sought after, that most of it is lined with docks and boats, and almost all of the water's edge that isn't obscured, has homes or other structures.
The Photographer wanted a green-scape in the background, preferrably with trees and flowers.  I found the one place in all the harbor that matched his description. On shooting day we went there with two gondolas, one motorized boat for the photography staff, and the rowing gondola to be in the shot.
My friend Mark Wheeler (who maintains the motors and electrical systems in all of my motorized gondolas) was driving the "camera boat", while I rowed the "picture boat".
The wind wasn't strong, but it made its presence known, blowing both boats towards the rocky shore.  The piece of water we were working with was just big enough for Jason to get the shot, and we took more than a dozen passes, shooting between five and ten images per pass.
I'd glide into place,
the camera boat would line up for the shot,
everyone on the picture boat would do their best to create a great image,
and the expert photographer would work his magic.
Then, just before the wind was goint to blow us onto the rocks,
I'd row hard out of danger, double back,
and glide back into place for another round. 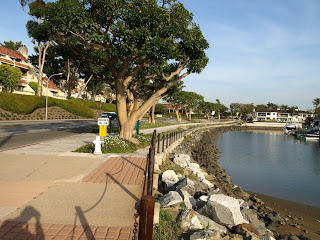 Here's a scouting shot I took prior to the day of the shoot.
The models were awesome - fun to work with and great at what they did, Mark drove the camera boat like a pro, and Jason Dewey and and his assistant Shawn O'Connor were both fun to watch and amazing at what they did. Lastly, none of this would have happened with out Ruby Gualberto from Vist Newport Beach Inc., who connected us with Jason and did all those things that nobody ever gets thanked for in prepping for and supporting a shoot.  And they shot in multiple locations throughout Newport Beach.
Thank you Ruby.

To view some of the amazing work of Jason Dewey, go to www.jasondewey.com
Posted by Gondola Greg at 1:33 PM