Sunset Get-Together in April - The Madness of a Group Shot

The "group shot" has become a tradition at the Sunset Gondola get-togethers.
Of all the traditions we keep, it's arguably the shortest.
Cooking, eating, rowing, and such - all take time, while this is done in a matter of minutes, but what's captured during that brief time,
serves as a sort of time capsule.
It shows who was there, who they were there with, what they were wearing, and in some cases - what they were drinking. If you look closely,
you might also be able to determine how much they'd been drinking.
Last week I happened to have the video camera in hand when we were shooting a few group shots, so here's what it looks and sounds like building up to the flash.
I'll post a clip, and then the photo that was taken.
By the time we line up at the rail, the gathering has reached "party level", and the atmosphere is festive to say the least.

Now you know why it looked like I was break dancing...I was really just trying to plop my butt on the ground before the picture snapped.
Didn't quite make it that time. 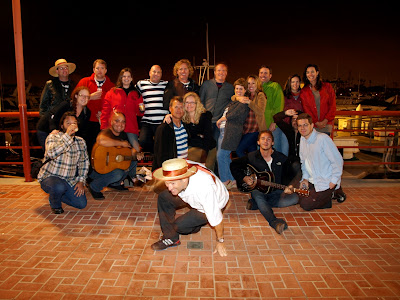 The next shot went well, and I managed to get in place before the flash.
It's fun listening to the various things people are saying (or yelling) as things progress.

If you've been looking at the group shots we've taken over the years,
you might have been under the impression that they were carefully posed,
or that everyone was mellow and patient as they waited for the flash.
In truth, it's always been crazy, and the moment caught by the camera was but an instant captured and recorded...and then the madness continued. 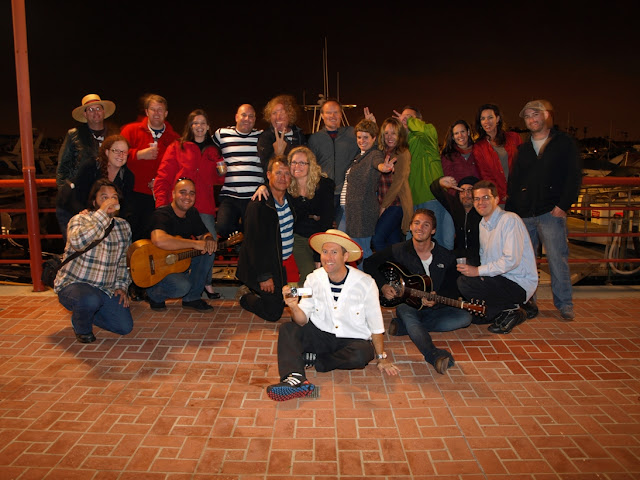 But for that instant, everyone was happy, they were having a blast,
enjoying the company, the energy, the mood and the moment.
A perfect moment captured in time.
I've been a bit negligent in posting everyone's names this time around,
so let's take care of that here.
From left to right and then wrapping around to the the front:
Mark Schooling (with hat), John Synco (in front drinking), Tricia "Trish the Dish" Synco, Mike Bixler, Eric Bender (with guitar), Cherie Woodward, Sean Jamieson, Andrew McHardy, Tim and Dawn Reinard (Tim kneeling with Dawn on his knee), Scott and Michelle Dziadkowicz, Erin Goodell, Paul Bradley, Rachel Grizzel, Erin Scheller, Kent Dexter (black jacket), Ian “Basso” McCabe (light blue dress shirt), Ignacio Villanueva (pointing at “Basso”), Kelly Stiles (with black guitar), and the jackass in the front with the video camera is Gondola Greg.
Posted by Gondola Greg at 9:35 PM