Zattere from the Ship

The following is a series of images captured from the top deck of a cruise ship departing Venice.
My daughter Cassandra and I positioned ourselves during departure, and to be honest, I'm not sure which of these are hers, and which are mine.
We shot a lot of images that afternoon, but today's series of photos are of the segment of shoreline known as the "Zattere". 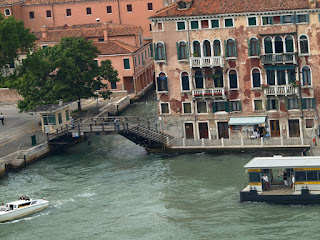 The Fondamenta Zattere officially begins at the wooden bridge adjacent to the vaporetto stop of San Basilio.  This canal is a thoroughfare for water taxis. 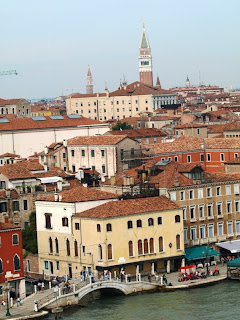 Probably the most well-known canal in Dorsoduro is the Rio di San Trovaso - it's the one where a certain historic squero lies.  Here's a view of the canal, with the Campanile of Piazza San Marco in the background. 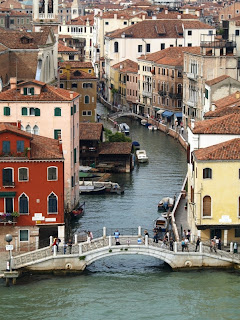 Looking down the Rio di San Trovaso, we catch a glimpse of the squero, and can see how the canal winds back and forth on it's way to the Grand Canal. 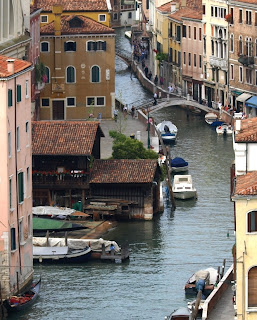 Changing the angle a bit, we have a better view of Squero San Trovaso.
Just before the squero, a narrow side canal heads off to the left - follow that canal and you'll pass by the Squero Tramontin and Squero Bonaldo. 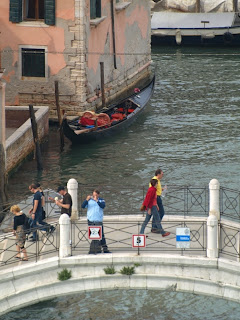 Moored alongside the Rio di San Trovaso, is a beautiful passenger gondola - dressed and ready for passenger service. 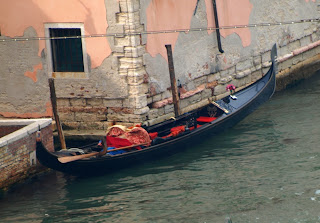 Here's a closer look at that boat. 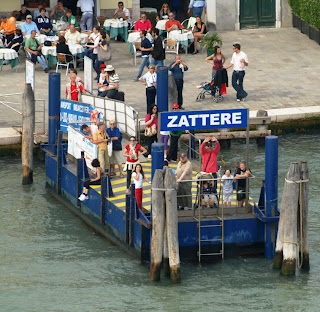 Back in April of 2010 I put up a post using this picture.
It seems that everyone wants to look at and wave to a gigantic cruise ship as she plows by. 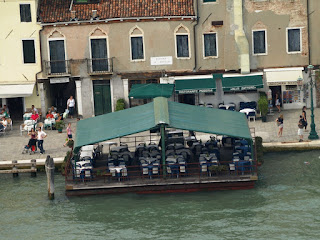 Not far from the platform, we passed this interesting additional dining space.
I posted this photo originally in May in a piece called "Zattere Restaurant Platform". 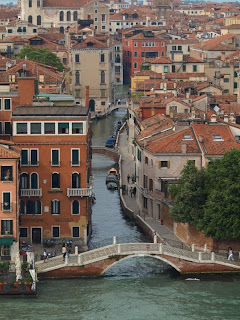 Next we see the canal known as Rio di San Vio.
Four bridges cross this canal and a fondamenta follows along one side.
On the other side there's a partial fondamenta, which ends like a small campo. 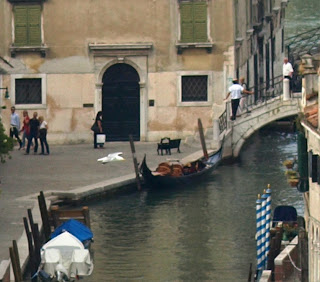 Moored to two poles near a bridge, we see a lone gondola, and on the bridge the gondolier stands, hoping to convince someone to take a ride in his boat. 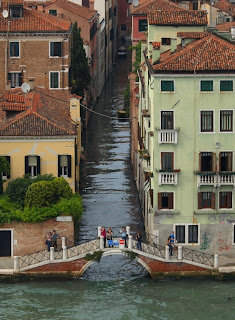 Unlike the last two canals, the next one - Rio Piccolo di Legname, takes a few turns before connecting with the Grand canal. 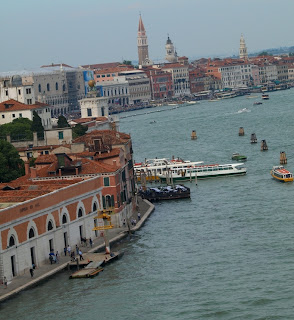 As we reach the end of the Zattere, we see the punta di Dogana, and in the distance, the district of San Marco.

The last time I stayed in Venice with my family, we rented an apartment near the San Basilio vaporetto stop, and we walked the Zattere every night.
It's a great place to take a stroll, digest what you've eaten, and just breathe the ocean air as it blows in from the Adriatic.