Follow-Up to "What the HECK Happened Here?!"

For those of you who've just joined us here on the Gondola Blog, on March 7th I posted this photo, inviting readers to present ideas as to "What the HECK Happened Here?" 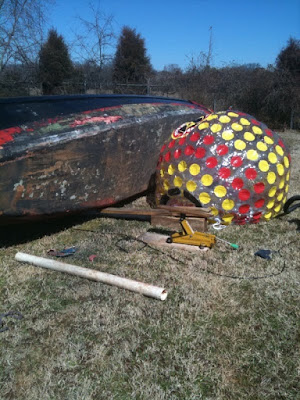 I got some great ones too.

Sean cracked me up with:
You're setting up for "my kids are lost in our balloon gondola" publicity stunt.

Bepi Venexiano came up with:
Balloon was slowly inflated and used to roll gondola on its side.

Ingo said that it was a lost soyuz-module (an old Soviet spacecraft), saying that the:
24 jet propulsons are colored yellow and red for camoulflage.

Joe Gibbons had a funny one:
I think its a modular housing unit, built especially for gondoliers while doing that never ending maintainance. It even has plumbing and wiring, check out the pipes and wires on the ground. Solar Heated!!!

Nereo Zane described it as:
the "day after" the Festa del Redentore
Something he would know a lot about.

I'm happy to inform you all that somebody got it right.
Congratualtions are due to Bepi Venexiano - you were right on the money.
Tamas in Hungary figured it out too, comparing it to a truck rolling procedure he once saw undertaken by firemen. I would guess that several more of you did figure it out, but opted to go with something funny instead, and for that I thank you.

So here's the backstory:
Joe Gibbons originally sent me the photo, but it was Robert Dula who took it and was responsible for the operation.

Robert wrote the following description:
Here are the steps....

First position boards as you normaly would.
Next, jack up gondola, to give enough clearance for sliding deflated ball under the mid point.
With shop vac on blow, start filling ball with air. As ball inflates, the gondola will rise to tipping point. (watch the bow; it might start sliding.)
To reverse... fill ball partially, to cushion, and push gondola onto ball. Leave the valve open and the gondola will slowly lower, and rest on boards.
It helps to have an assistant ready with boards, in case the gondola tips too far. I discovered this too late. Fortunately, I was on dirt and the ferro and lama di poppa stopped the fall.
I wish I had a video of the process. It would have been entertaining.
Adapt, Improvise & Overcome.

Great piece Robert. Thanks for getting it to me.

Now I must end with a few possible scenarios of my own:

Two gondolas were playing dodgeball and the one in the picture was the loser.

Thieves were in the process of a "gondola-jacking" when the gondolier discovered their dastardly act. He reacted by throwing a giant beachball at them and they fled into the night.

This is a crime-scene photo from a vicious "clown bashing" incident. The weapon was a section of white plastic pipe, and the victim was wearing his most colorful plastic polka-dotted raincoat at the time.

Some college physics students conducted an experiment to determine "if you drop a gondola and a beachball at the same time, which falls faster?" They used modified floor-jacks to launch each item into the air - one can be seen in the photo.

Anybody else got an original explanation for what happened here?