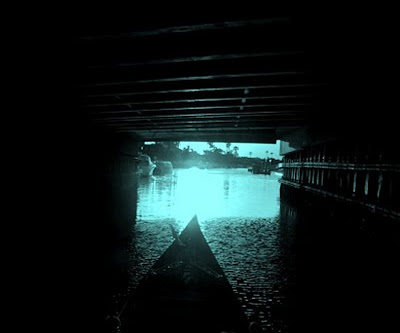 Once again I found myself out on the waters of Newport Harbor.
Today the winds were up a bit, reminding me of challenges I'd faced before when I was much newer to Venetian rowing.
As I approached the Newport Boulevard bridge, it occurred to me that these were almost the same exact conditions I'd encountered one day while rowing with Angelino Sandri of Gondola Servizio in Oakland, California.
Shortly after Valentines Day of 2000 I flew up to Oakland to receive some instruction from Angelino at his operation there on Lake Merritt. It was immensely helpful as prior to that I'd learned the basics from an American who's training had been passed down from a long series of other Americans. He was a good friend of mine, and a great gondolier, but I began to realize that in the "passing down" process, some things had been lost in translation.
Angelino had learned to row from Venetians, in Venice, and because he went right to the source, he had a more educated style and understanding of the artform.
Among other things, he taught me how to row sotomorso - a technique I hated, until I got it.
After that I couldn't stop thanking him for it.
A few weeks later Angelino was in my neighborhood visiting family and we took my wedding gondola out for a sort of follow-up session. It was there that I faced the wind, the same wind I rowed in today.
At just about the same time of year,
and roughly the same time of day,
I rowed against the wind as it blew from the same direction it had ten years earlier, and I had that sort of deja-vu type of experience we usually only see in movies.
The wind this time of year tends to bottleneck at the bridge, shooting through with extra pressure in that tunnel-like passageway.
If you keep your ferro into it, at a slight right angle (which is a tiny bit to starboard) you can continue to push forward through the tunnel. Push too much and you'll need to quickly correct with a stalia stroke or two, don't push hard enough with your premer stroke and the wind will toss your bow in the other direction.
Sure, you can point your bow straight into the wind, but keeping it "just right" requires a more timid approach, which doesn't allow you to make much headway. Keeping it to the right, you can use more power. It's a good example of finding the right balance, and if you do it several times a day, it becomes second-nature. But ten years ago I was still getting to know that scenario, and the whole experience was much more, shall we say "exciting" back then.
Today, as I was heading into the wind, I don't remember exactly what it was that triggered my memory, but it brought a smile to my face as I rowed - doing pretty much my favorite thing in the whole world, once more.
A wind that used to be harrowing, is now a welcome challenge, and something I look forward to.
These days we concentrate also on singing, so while I started out fighting, and grunting, and maybe even doing a little swearing under my breath a decade ago,
nowadays I press through it with a smile...and a song.
Thanks are due to Angelino for his patient instruction so long ago.
To view Gondola Servizio, go to:
http://www.gondolaservizio.com/
Posted by Gondola Greg at 8:53 PM

Curious lighting makes the photo feel as if the gondola in the tunnel is heading right into an old movie screen (for old memories)?