As promised, here is a "reprint" (or the internet version of it) of the piece from 2001 that I mentioned last week.

The famous Golden Swan gets a new look.

She has been many things to many people.

To some she was the first gondola on which they ever cruised.

To many couples she was the place where they became engaged. I’d be curious to know how many millions of dollars worth of diamonds she has transported . . . one at a time in the form of engagement rings.

Some gondoliers have fought over the privilege to be her pilot while others have tried to avoid cruising past her for fear that their passengers might become jealous of such a beautiful boat.

There are some who regard the Golden Swan as a window to an interesting chapter in the recent history of gondolas, as she is the descendant of the first electric powered gondola built 20 years ago.

My story is one of those that began with an engagement ring concealed in the bread basket on a dinner cruise on the Golden Swan. I surprised my wife (then girlfriend) with not only a gondola cruise but with an engagement – which she accepted. If she had not said yes to that fateful question I might not be so fond of gondolas today -- but she did, and from that point on I was hopelessly addicted to gondolas. Over the years I have ridden in or piloted hundreds of these beautiful craft but I’ve never forgotten the first gondola I ever rode in, 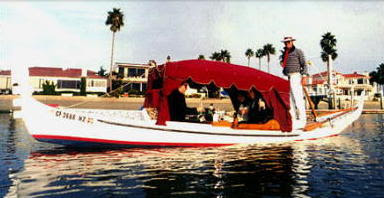 The Golden Swan in white with Joe Munday at the helm.

At 25 feet in length she is noticeably smaller than her Venetian counterparts; in fact she is more like a sandolo in dimension but has all the creature comforts one would expect from a processional craft designed to spoil two people rotten for two hours on the shimmering waters of Newport Harbor. Her designer and builder, Joe Munday, crafted over a dozen gondolas of different styles and lengths, but this one he built for himself. Joe designated this design as his “Coupe Royale” and refers to the Golden Swan as a “Courtship Gondola”. A few years ago when he decided it was time to build himself one more gondola (currently under construction), Joe offered the Golden Swan for sale and my wife immediately purchased her knowing that the boat would make a great surprise present for me -- and she was right.

Over the years I’ve experienced a slow but steady transformation going from the wildly progressive towards the staunchly traditional.
When we hauled the Golden Swan out for service and painting in the middle of January, I decided to do something I’d always wanted to do:
paint her black. 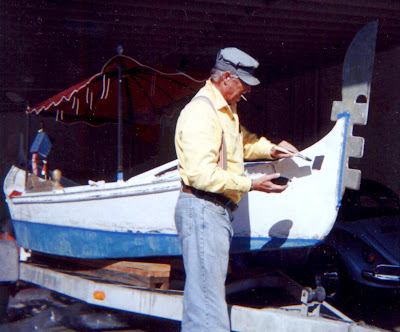 The moment of true commitment:
Joe applies the first brush stroke of black to the freshly prepped Golden Swan.

It’s not that I disliked her gleaming white paint; in fact, the Golden Swan was gorgeous in white -- but I knew she could look even better in black and I felt it was the right color for a gondola. Black on gondolas is as standard as red on fire trucks; sure there are some variations but nearly all gondolas used for taking passengers are painted black. An edict issued in the 16th Century by the Doge of Venice is responsible for this abundance of black crescent-shaped boats. It seems that as the gondolas of Venice in the 1500’s increasingly became status symbols of the wealth of their owners; prominent Venetian families would try to outdo each other by not only having as many gondolas as they could afford but also by having the most decorated gondolas. With this in mind it is no surprise that things in the gondola world became frightfully gaudy and the leaders of the city became concerned about the unnecessary expense being put forth by so many pillars of the community. Thus on the eighth of October, in the year 1562 the Doge declared that henceforth all gondolas were to be free of flashy colors and decoration -- and as a result the boats, because shipbuilding at the time incorporated the use of pitch and tar, all ended up being black. To this day the Doge’s orders are carried out;

all gondolas used for livery service are faithfully painted black.

I talked to Joe Munday about the color change; he liked the idea and offered to help. Along with friend and gondolier Lars Berg the three of us set out to prep the boat for paint . . . and prep and prep and prep!
An extreme color change like this takes about three times the prep work and, of course, along the way we decided to replace about half of the items removed in the prep process. This wasn’t the first time I’d been involved with a “repaint that became a restoration”; boats seem to have this enchanting ability to convince their would-be painters to do just “one more repair”. The old “uh-oh, now look what I did -- I made a clean spot” was used jokingly several times, and in the end we were all under the Golden Swan’s spell. 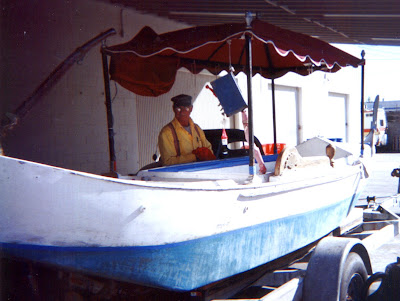 Joe contemplates the many stages of prep. 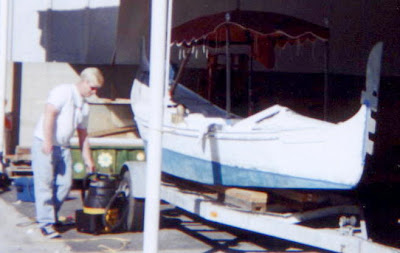 Lars with a trusty shop-vac. 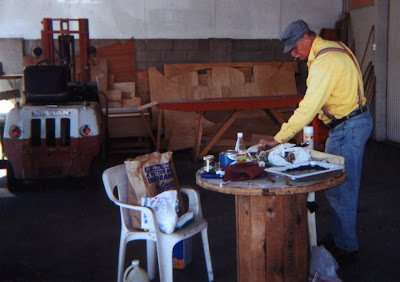 Lunch and supplies on the same table.
Pay attention or you'll end up with a mouth full of paint!

Every visible surface and many under-deck ones as well were prepped, primed, and painted with multiple coats of gloss black paint. We chose to brush instead of spray -- partly out of practicality, but mostly because it’s a more enjoyable method where you picture Venetians doing the same thing centuries ago, and in the mean time you bond helplessly with the boat
...and paint your buddy’s shoe when he's not looking.

Every single trim piece was replaced with a shiny piece and, as in the restoration of the Curci Gondola, most of the fasteners had to be “re-slotted” with either a small grinding tool or a hacksaw before being backed out with a screwdriver. New carpets, new operating hardware, and most noticeably, new cavalli were all part of this endeavor. “Cavalli” are the easily recognized brass “sea-horses” seen on gondolas in Venice. Some years ago these two new ones were purchased in Venice by a friend; since then they have adorned the fireplace in my home, all the while calling out to me, “Put us on a boat!” Small modifications were made to the pusioli (arm-pieces that sit on the decks on either side of the passengers) and now there are brass seahorses on the Golden Swan . . . yes, I know that sounds confusing but it looks great! 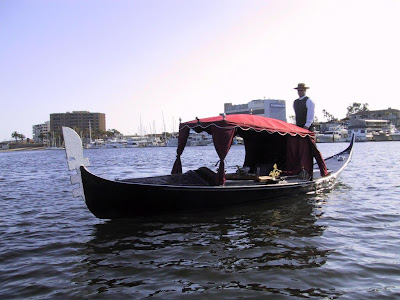 Black colour may hurt in places which are located much south of Venezia's latitude and get more sunshine. The original choice of white paint was probably a matter of practical considerations, as well as aesthetics.

Nowadays, after 450 years there is a renewed crackdown on "gaudy-looking" gondolas in Venice, I think you blogged about it some months ago.

I have had the pleasure of cruising in the golden swan twice & remember it to this day very fondly. Do you still own it & cruise in it?