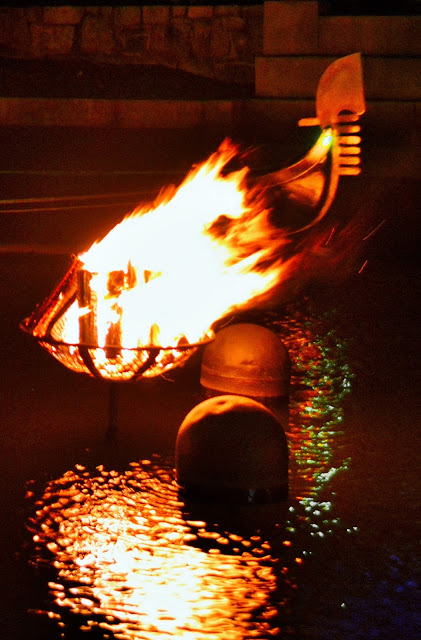 Ten years ago, my friend Joe Gibbons in Boston told me about this amazing event in Providence, Rhode Island called WaterFire.

His tone conveyed to me that it really was an incredible thing.
I asked him to describe it, and while he did his best to explain
what it was, the event he was describing didn't sound as amazing
as his enthusiasm for it.

I heard about WaterFire several more times from different people who'd experienced it, and again, their descriptions did not match how awesome
they clearly thought it was.

Finally, in 2014, I was able to attend the US Gondola Nationals
in Providence and see WaterFire in person.

It did not disappoint.
And yet while it was happening, I realized that mere words could not
adequately convey the experience.

Of course after all of this negativity about describing it,
I suppose I should give it a try:

WaterFire takes place after dark on the river running through Providence on selected nights.
It began in 1994 as a sort of public art piece.
Metal fire pits, which are mounted just above the surface of the water are
filled with firewood and set alight.
A selection of deep musical pieces is played through a sound system.
The music is from all around the world, with elements of classical, primitive, and new age.
People line the shores of the waterway, drinking wine or hot beverages,
some lay out blankets and have picnic setups.
Gondolas take passengers around the flaming cauldrons,
while staff boats tend to those flames and feed them fresh firewood.  Occasionally other boats cruise through,
sometimes throwing flowers to folks on shore.

See, wasn't that a disappointing attempt at describing it?

The folks at La Gondola in Providence not only hosted an amazing
Nationals competition last year, they offered any visiting gondolier
the chance to row a cruise during this incredible event.

Many of us, from various states, got to see what WaterFire is like
from a gondolier's perspective.
Afterwards, I asked four of the guys rowing that night
to describe WaterFire in three ways:
One word,
One sentence,
What do you like about it?

Two of the guys were from Providence, one was from California,
the other from Minnesota.

Here's how they answered:

ONE WORD
"Elemental" - Richie from Sunset Gondola in California

ONE SENTENCE
"A gathering of primal elements."
- Rafaello of La Gondola in Providence

"wind, water, fire, smoke, merging as one in an ever changing sea of enchantment."
- John Kerschbaum of Gondola Romantica in Minnesota

"A fusion of culture combined with archaic elements."
- Richie from Sunset Gondola in California

"It's good to be a gondolier during water fire."
- Alberto of La Gondola in Providence

"Rowing through a bridge, and seeing the fires with their watery reflections framed by the arch." - Rafaello of La Gondola in Providence

"A wise man once said that life is the gap that bridges water and fire,
I don't know about that but it sure is nice to push a gondola around a bunch of campfires, and listen to the music the world has to offer.  They are tricky boats to drive, and you up the ante a bit when there 100 or so fires to navigate.
It is a great way to bring the community together."
- Will of La Gondola in Providence

"It was by far the coolest thing I’ve ever done on a gondola besides race with Eric.  It was interesting to be the facilitator for such a unique experience.  It’s also a bit nerve racking because you’re rowing a wooden boat so close to the fire.
Boats can catch fire, passenger’s hair can catch fire!"
- Richie from Sunset Gondola in California

For the record, nothing caught fire.
John from Minnesota had too many things to mention in this category.

Tim Reinard - owner of Sunset Gondola in California offered a good summary:
"Rowing along the river in Providence during waterFire is like being the star of a Broadway show with out script or words, it seems so primal and ancient.
You feel the heat of the fires as you row by. You hear the deep base of the world music and absorb the sonic atmosphere. You see the dancing shadows and shapes of the thousands lining the banks of the river, the fires casting a picture that Dante would appreciate, and they are all looking at you." 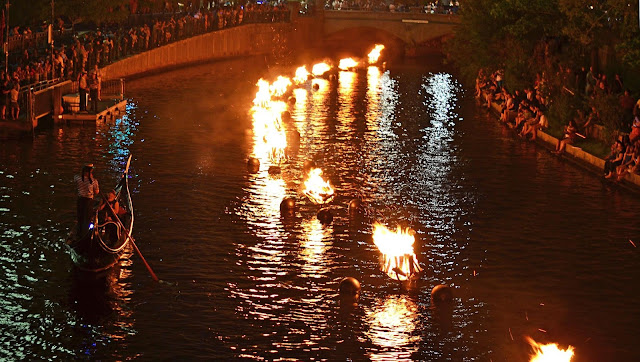 I did ask one other guy to answer my three questions, but he didn't take direction very well.

Marcello - owner and head gondolier at La Gondola.
ONE WORD
"As a gondolier, surreal, though my immediate thought was multi-sensory
(even when told to give a one-word answer I cannot do it!)
As a business owner, STRESSFUL!


WHAT DO YOU LIKE ABOUT IT?As a gondolier, there are a whole bunch of great things about being there on a WaterFire night:
1.  we are there early enough to always get parking!
2.  no fighting crowds - the traffic on the river is busy, but still WAY less congested than on shore!
3.  waving to the little children in the crowd, and tipping my hat to the couples, etc., and seeing their response - there is nothing like putting a smile on a complete stranger's face, particularly that of a child.
4.  the feeling of being a bit of a celebrity, but one who is nevertheless almost completely unrecognizable out of uniform :)
5.  the escape from reality that comes with taking off from the dock into an experience that seems to be out of a much older time and place. 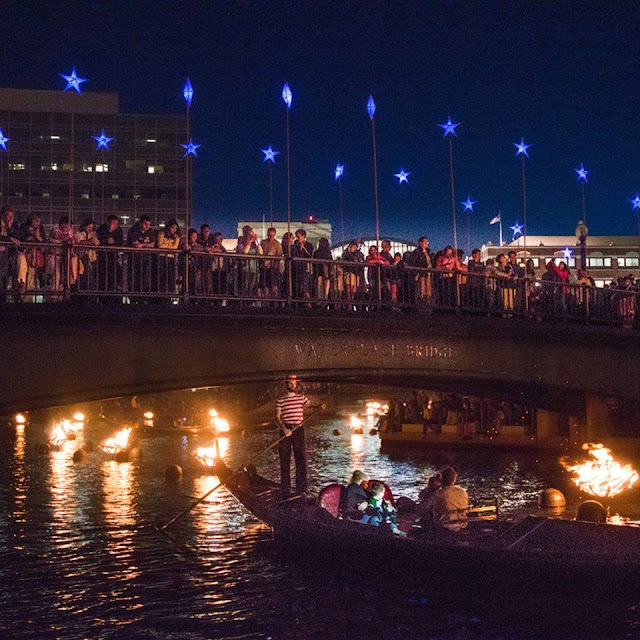 I've tried to capture it on video, but have determined that the only true viewing platform for something like this was invented centuries ago:
The human body with all of it's senses.
WaterFire is not just something you watch.
It's an all-senses experience.
You see it: fire, water, friends, boats and bridges.
Lots of movement - the only things that don't move are the bridges and the ground under your feet.
You hear it: music, conversation, the crackling of wood
as it burns in the cool night air.
You smell it: charred  and burning wood, moist night air.
You taste it: that same smoke manages to make it to your tongue,
along with red wine or hot chocolate.
You feel it: The heat from the fires radiates, the breeze glides past you,
the music (at such a high volume) resonates your body.
And those who don't believe in a sixth sense...need to visit Providence
and experience the wonder that is WaterFire.
Because I am convinced that a person with none of the five recognized senses, would still experience the profound feeling in their soul that WaterFire brings. 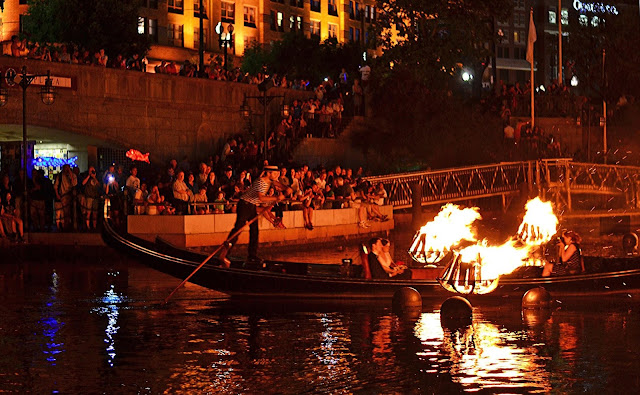 To learn more about WaterFire, or to find out about the next scheduled event, go to http://waterfire.org/
La Gondola in Providence can be reached at http://www.gondolari.com/
Posted by Gondola Greg at 1:30 PM

All of that together must be the best description of waterfire in existence... and yet...