The Four of Us on the Fourth 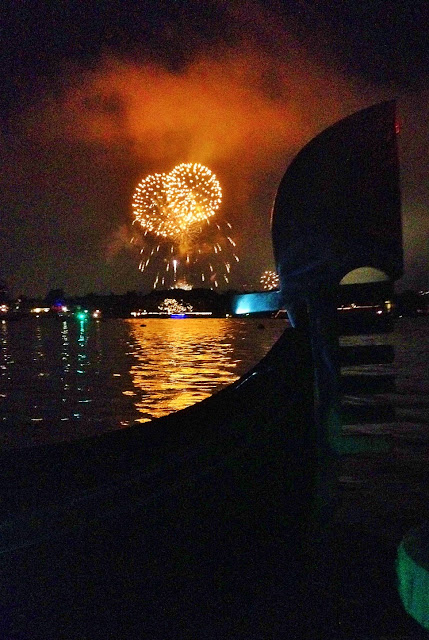 This evening I was fortunate to share the water with a few great gondoliers: Steve Elkins, Steve "Stefano" Anastasia, and Evan Kliewer.
We made our way as a group, down to the main turning basin of Newport Harbor, to watch one of the fireworks displays.
Stefano had a couple that got engaged on the water tonight, and we all enjoyed congratulating them after their gondolier announced that "she said yes".
On the way there, and during the return-row, there was an unofficial
sing-off going on, as the four boats cruised alongside each other and
each gondolier took his turn singing a song.
The passengers loved it, and so did we.
At one point I realized that the super huge charter yacht "Endless Dreams"
was cruising behind us.
I called my former gondolier Lars, thinking he might be the guy driving it,
and he picked up the phone saying:
"What!? I LIKE following the gondolas".
We all enjoyed waving and shouting up to him in the pilothouse.
I told my passengers that "the guy driving that huge yacht started out a s a gondolier" and that "there's hope for all of us".
The fireworks display was great.
We were able to view several different official firework shows, and there
were a number of residents who chose to create their own aerial displays.
All in all, it was a fantastic night out on the water.
The 4th of July is always great in Newport.