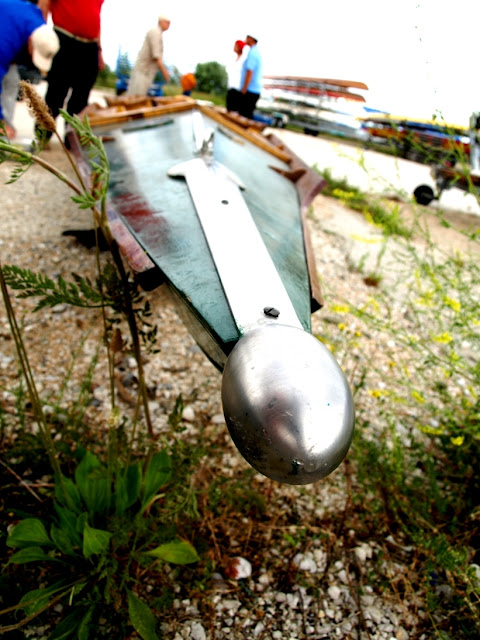 First there were the Three Musketeers,
then the Three Little Pigs,
followed, of course by the Three Stooges.

There's the three part harmony (a more portable barbershop quartet),
the three-piece band (like The Police, Nirvana or ZZ Top),
and the string trio (making appearances at weddings everywhere).

There's "three wishes" granted by a genie in a lamp (and all the jokes that follow),
the three-piece suit,
and then there's the three-piece pupparin.
Yes, I know, not as well-known as the other famous "threes", but a very impressive vessel nonetheless. 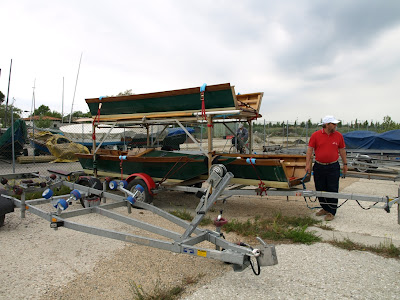 Ok, maybe not so "Holy Toledo, look at that!" amazing while disassembled on the trailer, but still a very clever boat.

I was in Venice for the 2009 Vogalonga, hanging out with Tim Reinard of Sunset Gondola and Megan Sliger who was at that time the owner of Gondola di Venezia in Boston.
We were at the GSVVM rowing club, enjoying some sort of liquid refreshment with a bunch of the club members and other out-of-town rowers when someone mentioned their "3 piece boat".
They asked if we'd like to see it.
Really, they just wanted some help assembling this craft.
These guys were from the Canottieri Armida in Torino - a city in northwest Italy, and the center for the 2006 Winter Olympics.
Such an invitation is exactly the kind of thing to draw curious American gondoliers away from their cold beverages and into a boat yard. 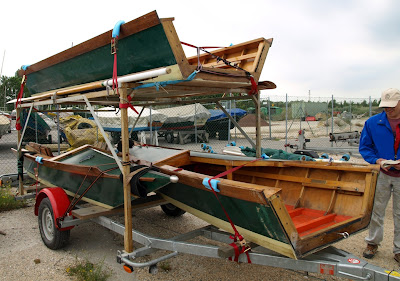 The reason for this three-piece design wasn't clear to me, and to be honest, I was so interested in the "how" (how it fit together)
that I probably missed the "why" of it all. 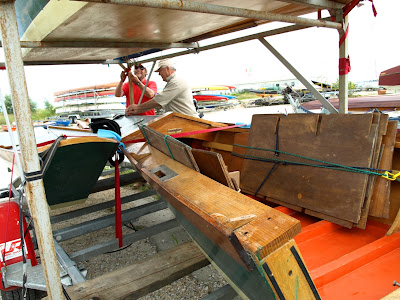 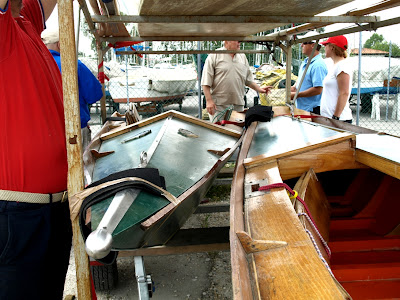 Each piece fits neatly in its place.
This photo brings new meaning to the phrase "stem to stern" 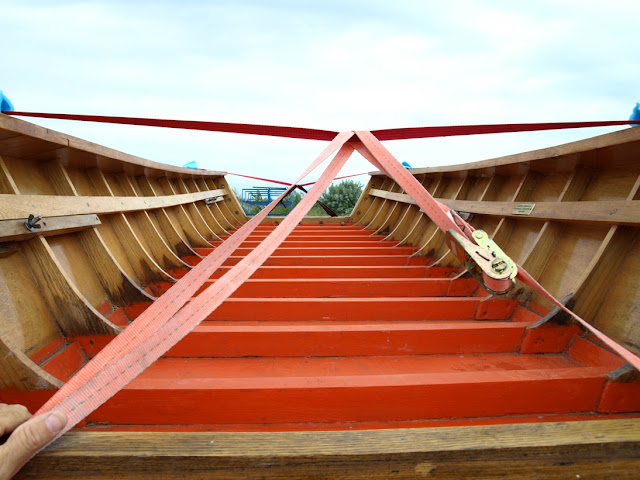 While the poppa and prua pieces nested next to each other on the "first floor" of the trailer, the midsection was "upstairs". 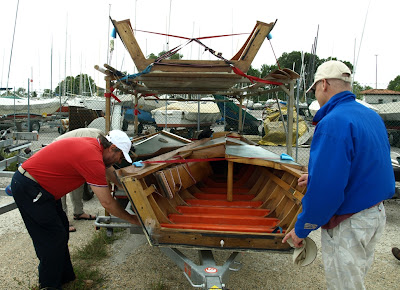 Each of the three pieces was easily carried, and as the old saying goes "many hands make light work". 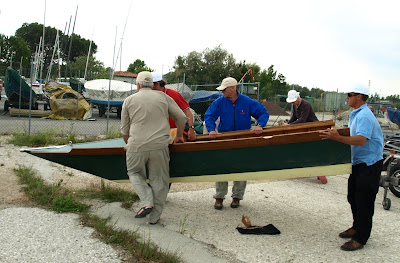 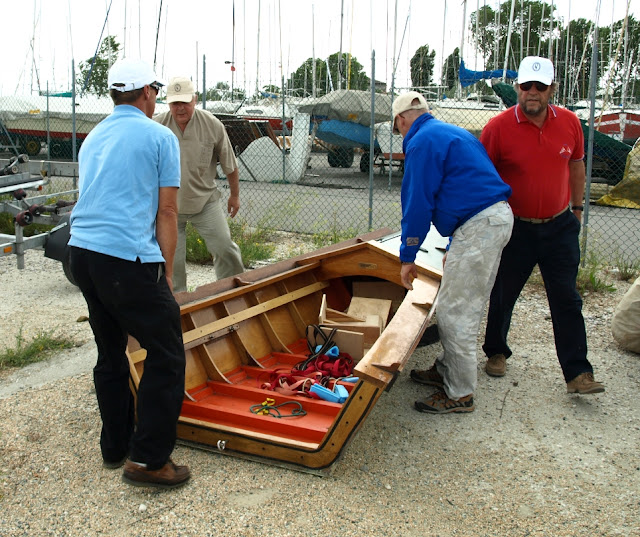 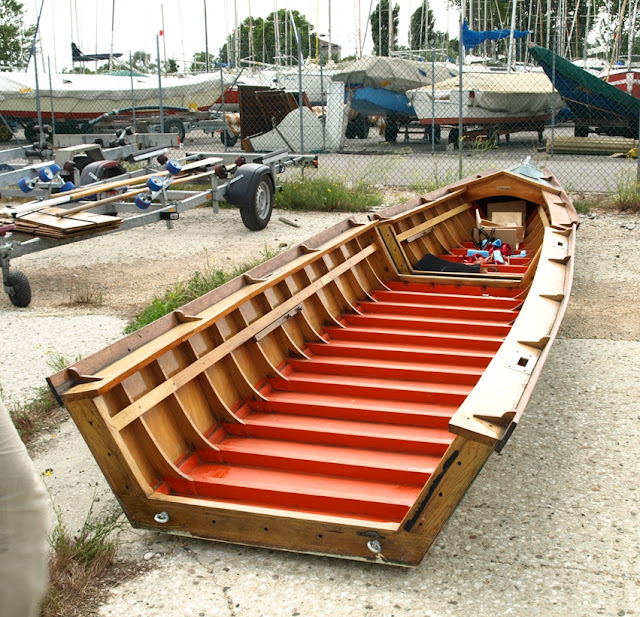 Bow + midsection. Two down, one to go. 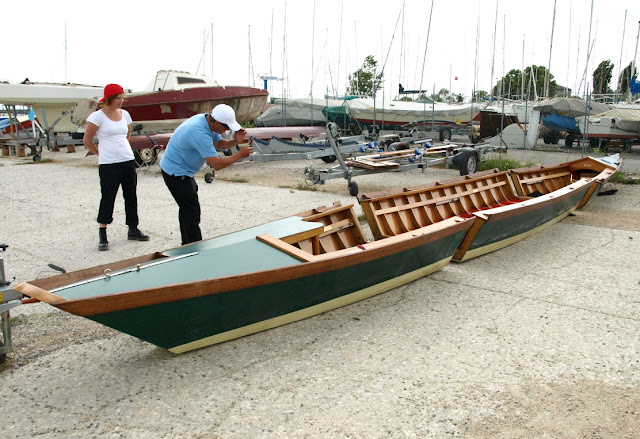 All three pieces on the ground.
As Tim and Megan looked with curiosity, and I continued snapping pictures (translation: not really helping at all), the guys who'd brought this some-assembly-required pupparin, were preparing to join the three pieces. 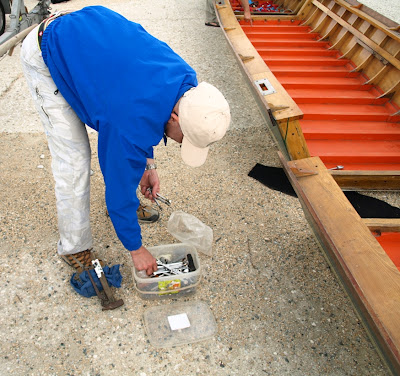 The plastic bin full of nut and bolt hardware is a small but oh-so valuable thing.  Forget to bring it and you've got big problems. 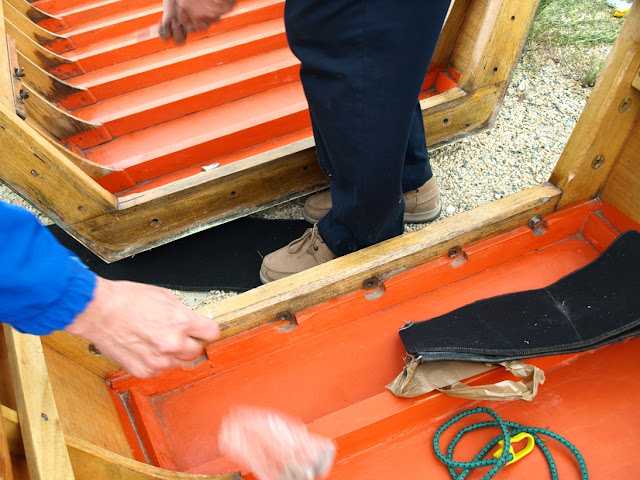 Each hole on one side lines up perfectly with one on the other side of the piece-to-piece connection, but first you've got to get that guy to step out of the middle! 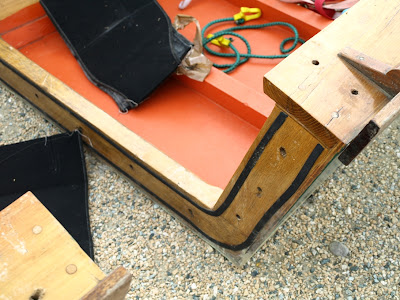 How do they keep the boat from leaking? Take a look for yourself.
I don't know if it's weatherstripping or something else, but the gasket material they use is an inventive way to avoid building each piece with bulkheads at the joining points.
Once the joining points are bolted together securely, structural crosspieces are bolted in place.  These "trasti not only give architectural strength, I imagine that they also conceal the joining points as well. 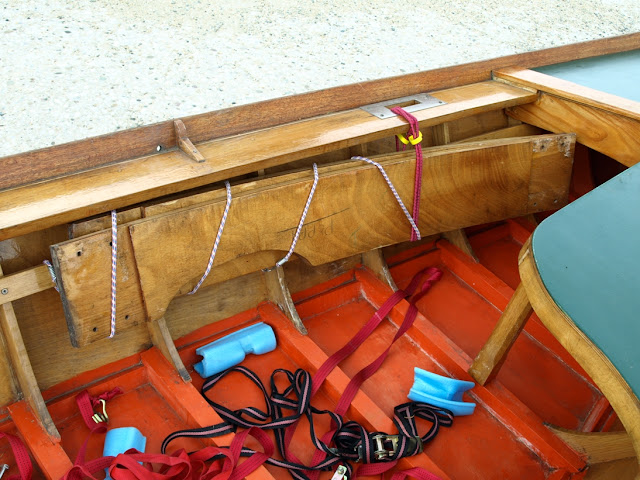 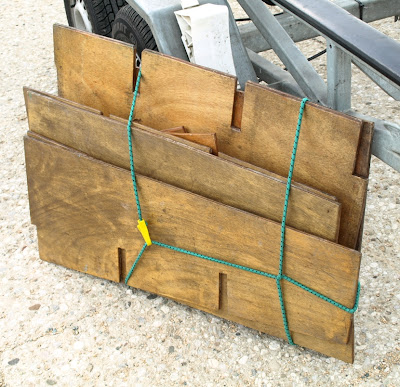 Leaning against the trailer, and waiting for the boat to be assembled,
the floorboards were bundled together and ready to be placed on the floor of the pupparin.

As I mentioned earlier, I'm not sure why the club in Torino wanted a break-into-three-pieces boat, but I can think of five or six good reasons.

The Canottieri Armida, like most rowing clubs outside the Veneto, is not first and foremost a stand-up-and-face-forward rowing operation.
Voga-alla-Veneta appears to be a secondary interest for most of them - cruise their website and you'll see galleries of photos with rowers seated and facing backward.

But for the few members who like to see where they are going,
this is a great boat, which is remarkably portable. 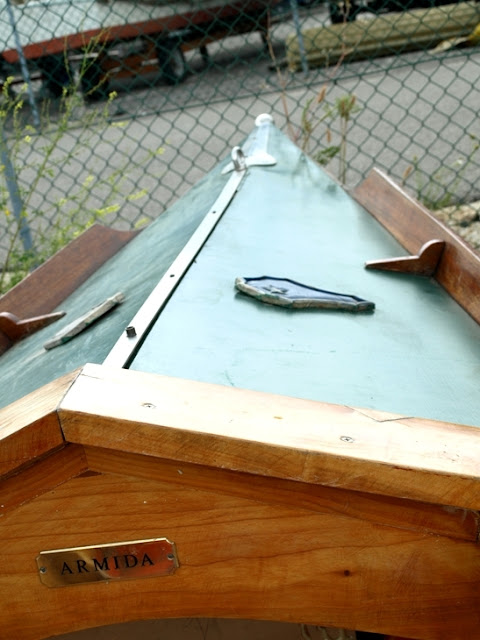 A close-up of one of the deck adornments shows an icon that's dear to the folks at Armida.

It can also be seen on lapel pins,
and while I don't know the details of the Armida logo or crest, it sure looks great. 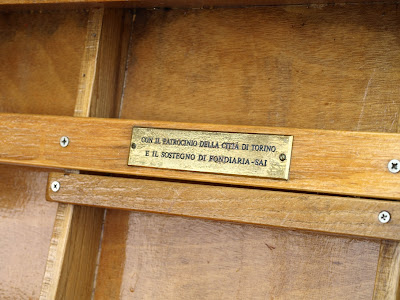 Most boats with a history and a heritage have at least one brass plate and the three-piece-pupparin is no exception. 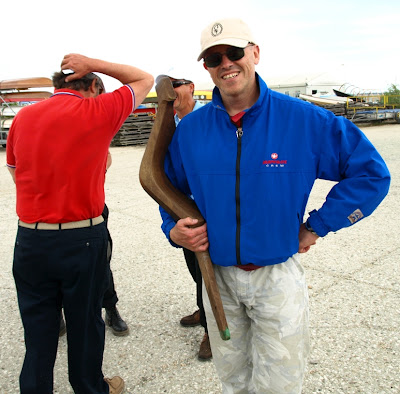 One of the guys paused proudly with the forcola da poppa. 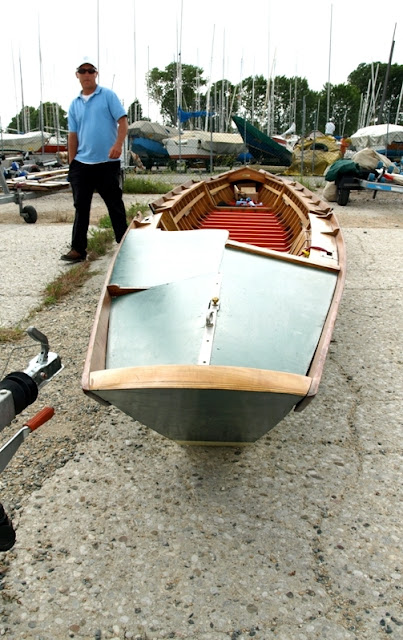 The GSVVM is right on the Venetian lagoon, but on the other end of the bridge to Venice.  I needed to catch a ride back to the apartment in Venice so we left before the 3 piece boat went in the water.  Since then I've thought a lot about that boat, and all the things I could do with it - like carry it up a stairwell and into a pool on the roof of a hotel,
or try and check it as luggage (piece by piece).
I've wondered how I might order one,
wondered if another midsection could be incorporated - like a leaf in a dining room table, and wondered if they could take out the middle,
join the two ends, and have a smaller, sportier model.
The Società Canottieri Armida Has a great website with lots of photos at www.canottieriarmida.it.
There's lots of great imagery from traditional english rowing events, but if you look a bit you'll see this boat, often rowed by as many as six at a time.

Incidently, the practice of breaking a boat down into smaller, more manageable sections isn't unique to the good folks in Torino.  In fact many of the "big desonas" we've looked at here on the Gondola Blog are built in a similar way, enabling them to be shipped more conveniently to other places for special events.

In my meanderings I also came across this interesting blog:
http://sectionalseakayak.blogspot.com/

Next time I row in the Vogalonga, I hope to see the "3 piece pupparin" in action, and maybe try a hand at rowing her.
Posted by Gondola Greg at 2:00 AM

I'll meet you in Sunset. You bring the birra and I'll bring my sawzall.