Yes, I know they're not Venetian, and in fact may very well be the furthest thing afloat from a gondola, but when my family and I took a ride on one of these remarkable vessels, I knew I'd have to throw some photos up on the blog.
These boats appear to be a fairly common sight to Russians,
but coming from the West, I was captivated.
Here was a whole class of vessels that had been designed and developed behind the Iron Curtain - a Soviet creation through-and-through.
I'd never seen, or even heard of them, and yet I couldn't help but notice that they looked like something from the Tomorrowland section of Disneyland back in the late 50's or early 60's. 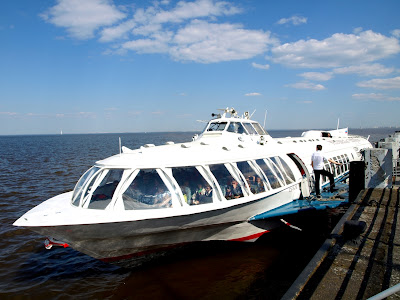 With lines like something from The Jetsons cartoon, these boats were amazing.  I noticed a number of things that were undoubtably very modern back in 1961 when this model began production - things like curved glass. 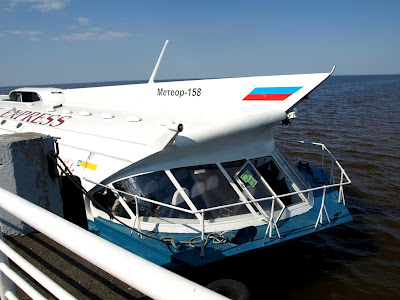 These hydrofoils had that "futuristic space-age" styling that was so popular in cars from the late 50's and early 60's, including a tailfin that would put any Cadillac to shame.
There was also an echo of something else - as if Captain Nemo might have piloted one of these boats.
Several hydrofoil designs were built in different shipyards under the Soviet flag - they had clever names that fit the space-age look.
The ones we encountered that day were all of the "Meteor" class - intended for use on rivers and smooth waters. 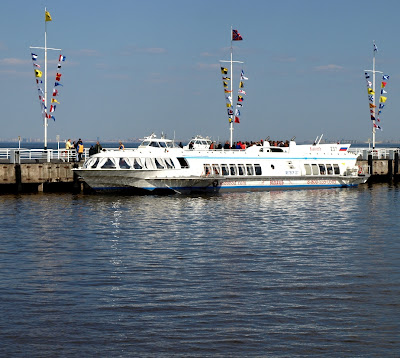 As we walked out onto the pier at Peterhof to board a hydrofoil back
to St. Petersburg, we saw a crowd of people waiting to board.
Boats were coming and going.  It was a national holiday, so lots of people were out and about; the way they hopped on and off,
it was clear that these boats were fixtures in their lives. 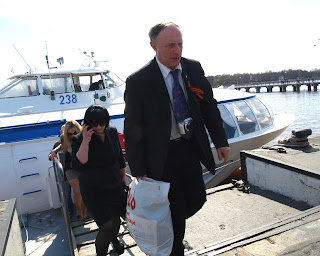 Stepping inside, we were surprised to find the forward passenger area much more spacious than it had looked from the outside. 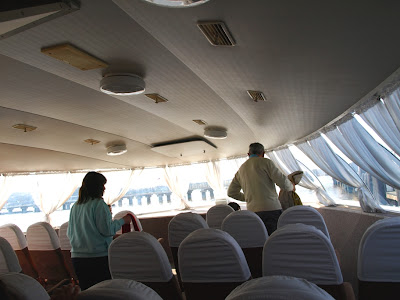 While this was not a new machine, her interior was in great condition,
with what looked like a brand new headliner. 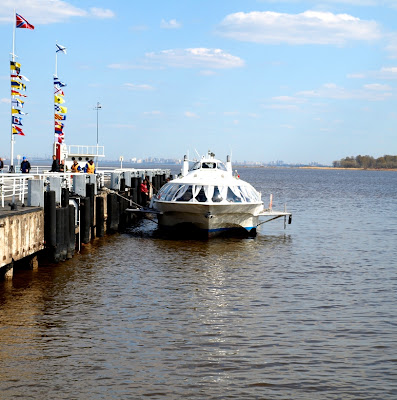 From head-on, the "Meteor" has a sort of flying saucer look - I'd guess this was intentional. 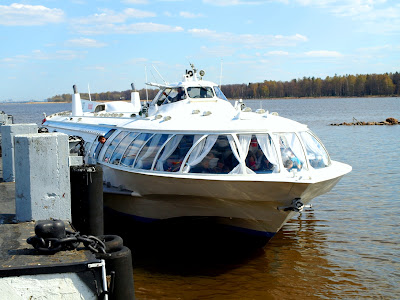 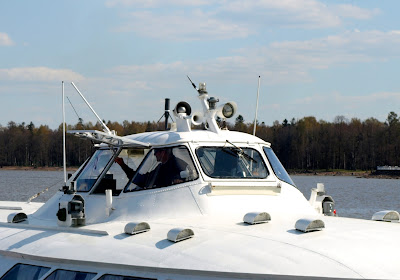 The big hydrofoil chugged away from the pier, her diesel engines chucking black smoke into the air. I told my kids to get ready because the boat was going to lift as we sped up - it seemed to me like it would be quite exciting.

In fact it was so gradual that I had to get up, go to the boarding door and look down just to confirm that we really were up on the foils.
The ride was so smooth and the boat didn't seem to run as fast as I thought it would need to in order to get up off the water.

We crossed an open piece of water within St. Petersburg's protected harbor.  The captain followed a series of bouys and from time to time other "Meteor" hydrofoils passed by in the other direction.
I shot this short video clip of a passing hydrofoil:

We made our way into the part of the harbor that leads into St. Petersburg's Neva River.
The boat passed shipyards with vessels of all sorts.
At one yard I saw several other hydrofoils.
The one up in the air reminded me of the Monorail at Disneyland. 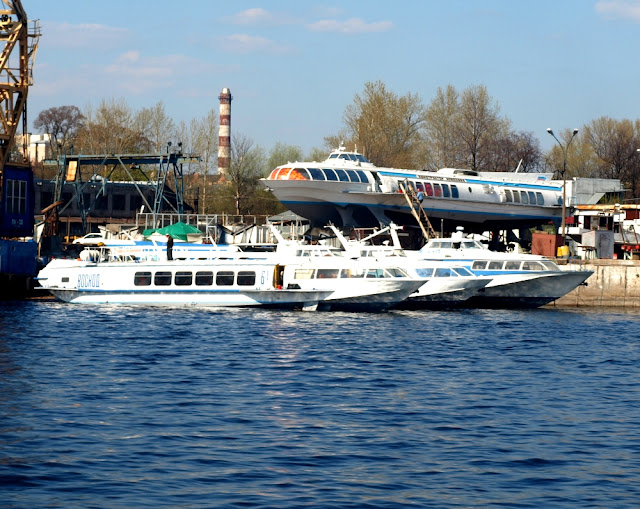 Further up the Neva we slowed down and the boat came down off the foils.  We passed another sister-ship, and some guy took a picture of me while I was taking a picture of his boat. 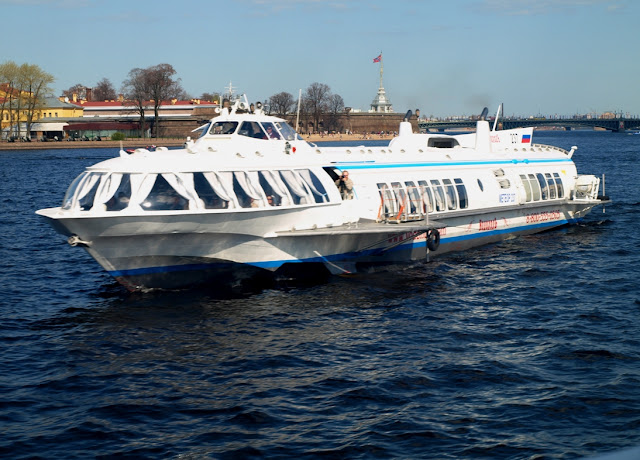 Our hydrofoil journey ended on the shore of the river near the Winter Palace of Russian royalty from long ago. As we disembarked, a horde of locals waited to catch a ride the other way - standing on a platform not very different from some vaporetto stops in Venice.
The Russians clearly love their hydrofoils (or at least the ones in St. Petersburg do), and I came away a fan as well.
Doing some hunting around the web I discovered this great page,
which lays out some of the history.
"Streamlined Soviet Passenger Hydrofoils"
Read about the "Rockets", "Meteors", "Comets", the "Stormbringer" and other types of boats designed to ride above the water.
The photos are terrific and there are links to more videos of these Soviet era hydrofoils in action.
Posted by Gondola Greg at 12:02 AM

I would love to make a home from one of these boats.