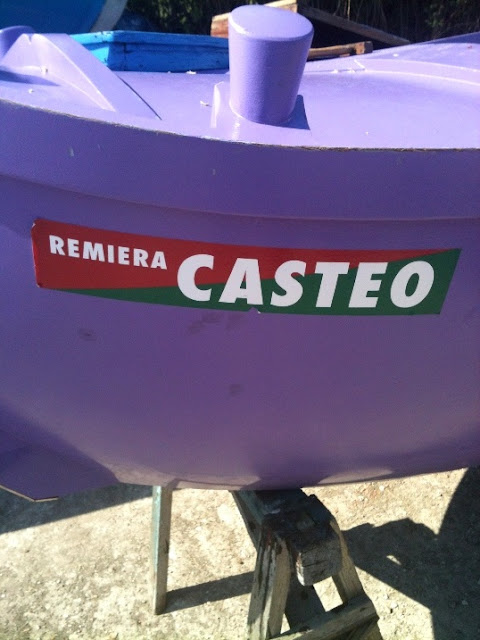 This post is brought to you by the color purple.
No, not the movie witht the same name,
Just purple.
Mix red and blue together and you get it:
A color that denotes royalty in many cultures,
a color that is beloved by teenage girls, shortly after they've outgrown their love of pink.
Purple is the color of so many things that do and don't occur in nature.
You'll see it on flower petals and butterfly wings,
on Lakers, Vikings, Rockies and several other sports teams.
The "artist formerly known as Prince" built a whole musical career on it.
And U.S. soldiers who are wounded in battle are awarded a high honor - receiving the purple heart.
Pictured above is one of the Remiera Casteo's caorlinas (photo taken before the tornado of June 2012).
Purple is also one of the nine colors seen in regatas in and around Venice.
You can see a purple regata boat in action in my post "Fast! And...Purple!".
Another purple boat (with crew in purple too) is in the post "Just the Photo - Purple".
And of course there aren't just purple boats out there.
To see all the colors, check out "Caorline Come in All Colors".
Posted by Gondola Greg at 11:44 PM