In the days leading up to Vogalonga, you never know what sort of boats you might encounter.  I came upon this one in the yard next to the GSVVM.
People come from all over to take part in the annual "Long Row",
and sometimes they bring their boats with them. 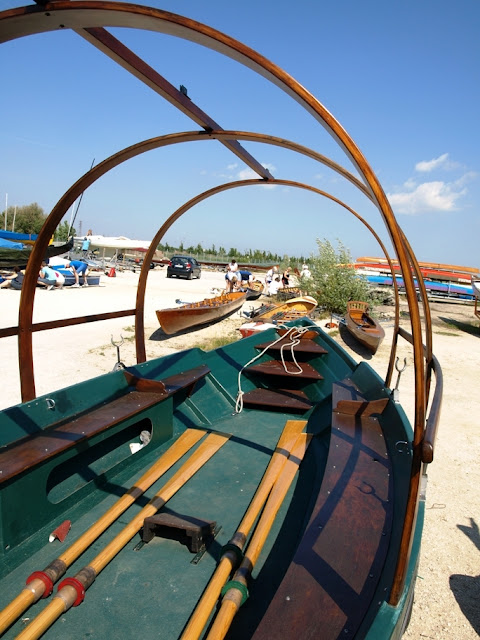 Spend some time around Lake Como and you will likely spot a boat like this out on the water.
In the past they were much more common - used to brings goods to market and light transportation.  Now they are mostly used by enthusiasts, who enjoy getting out on the water - either for fitness and recreational reasons or with romance in mind. 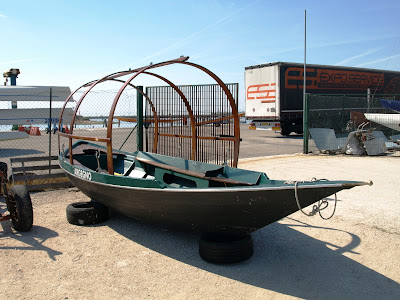 In some ways the boat looks like a sanpierota with no decks or a very beamy member of the sandolo family, but these boats hale from the region north of Milan.  Was there an influence in one direction or another as to the best way to build a boat?
Probably so, but that's not somewhere I want to go right now.
There are boats in other parts of the world that look like distant cousins of sandoli as well.

What we are looking at here is a design that was widely used in a specific area because it did what people needed it to do.

I've seen motorized versions of these boats, but most are rowed in a manner that is sort of like valesana, but without crossing the oars.
The rower stands, facing forward, and uses two oars which swivel freely in oarlocks like the ones you'd see in an old whaling boat. 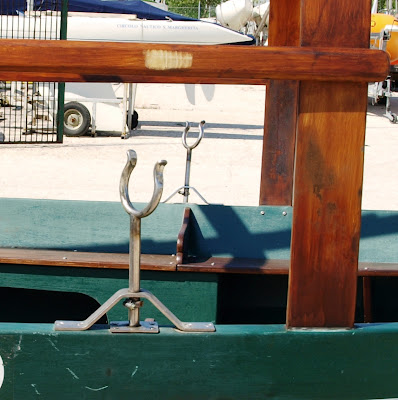 The oars in this boat reminded me of some I'd seen in crew boats, but with curious ends - they were cut square.  I'm not sure if this is a feature common with these vessels or if it was just the preference of this rower. 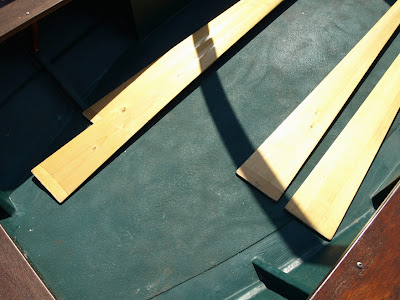 I've seen these rowed by one or two people.
In the days leading up to Vogalonga I saw this boat out more than once, but was always in the act of rowing my own boat, otherwise I'd have photos and video of the rowing style.
The name most often associated with this type of boat is "Lucia".
Alessandro Manzoni, born in Milan, wrote a novel called "Promessi Sposi" back in 1827.  This romantic story included a scenario where a woman named Lucia escaped in a boat like this.  The book has been called "the most famous and widely read novel of the Italian language".
You may not have read it, but chances are good that your friends in Italy have, and might recognize a boat of this type as "Lucia's boat".
A "Lucia" first appeared here on the Gondola Blog in November of 2008 in my post "The 'Lucia' - Traditional Rowing Boat".
It also turns out theat there's one of these boats taking passengers in the US - see "The Adirondack Lucia".
The most notable feature of a "Lucia" is her framework above the rails.
Designed to support a cloth shade, this structure typically has three "hoops" that rise from the rails almost like the frames of an old covered wagon in the American west.
I rarely see anything on these frames, but they remain part of the design nonethless. 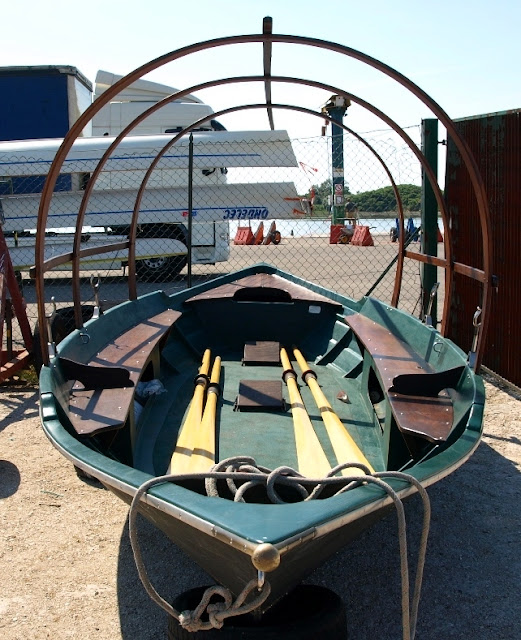 This particular example appears to be mostly fiberglass, but traditionally these boats have been made of wood, with varnished surfaces appearing in beautiful display.
Based on the construction, and the foot-wedge platforms mounted to the floor, my guess is that this one was designed and built for sport rather than picnics.
Posted by Gondola Greg at 12:04 AM