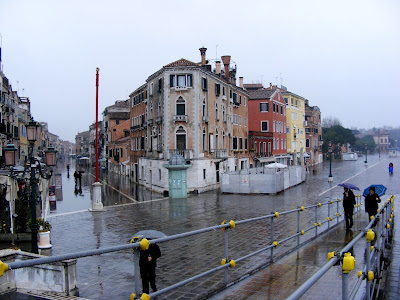 As  I write this it's raining here in Newport Beach,
and Nereo tells me that Venice has some light rain in the forecast too.


This photo was taken from the bridge known as the Ponte de la Veneta Marina o de le Cadene, which crosses the canal known as the Rio de la Tana as it meets the Bacino San Marco along the fondamenta.
Directly behind the photographer there are often luxurious mega-yachts moored, especially during events like the film festival.
To the right we see the riva Sette Martiri. As is common with shorelines in Venice, this walkway (often called a "riva" or "fondamenta") is a popular place for walking, shopping, or traveling on foot.
The street to the left is Via Garibaldi. At the forefront of Via Garibaldi we see a red post with a gold figure on top - anyone seen this post?
Bonus points for any interesting information on Via Garibaldi.
The platform with the metal railing and yellow connectors, well, I think Erla adresses those best in this post: "The ramps return to Capistrano — I mean Venice".
Break out your umbrellas, my friends.
Posted by Gondola Greg at 12:37 AM

At the end of via Garibaldi is a small trattoria called La Rampa. 30 years ago I had a book called Trattorias of Northern Italy, and it suggested La Rampa with this description..... Near the end of via Garibaldi find a small fish market stall where the mongers are closing up shop for lunch. Follow them to the end where they duck neath a small doorway into La Rampa. You will find them singing and having a glass of wine. Follow them in where they stoop neath a low beam into the dining room. Grab a seat and as you look toward the kitchen, mama will turn and smile as she prepares the meals for the locals that day. This described my experience exactly and I had a great pasta tonno piselli. One of the prides of Venezia! Well The Dad ran the greeting and the bar and Mamma ran the kitchen. I have had the opportunity to return to that exact spot each year now for 30 years ! Like a snap shot of history, I watched their children grow that were in strollers to the point now where the boy runs the bar and the greeting, daughters run the kitchen and their kids are starting to serve the tables. Dad has passed a few years back and mamma doesn't come down much anymore but la rampa lives on in all it's traditional history. How lucky am I to have watched this snippet of history and tradition. I will be back in May for my tonno piselli.
Yes.... Viva via Garibaldi!!!!