I just spent a little time on John Synco's blog.  I always enjoy reading his stuff, but now that he's in another part of the country, reading the blog has reminded me of how much I'll miss hanging out with him at Sunset Gondola get-togethers, not to mention ambushing him while he rowed in Alamitos Bay.
Gondoliers are interesting.
I've made that statement numerous times, and John is a perfect example.
He's creative, fun, very capable, and the kind of friend people want to have.

Now that I've said a bunch of very nice things about John Synco, it's time to poke some fun.
While I'm certain that many of you will read this statement wrong, while looking over photos of past events, I've noticed that John has a sort of "drinking problem".
Oh, it's not the kind you get fired over, or even the kind that affects your ability to be a husband, father, or good employee.
It's the kind of drinking problem that affects photography. 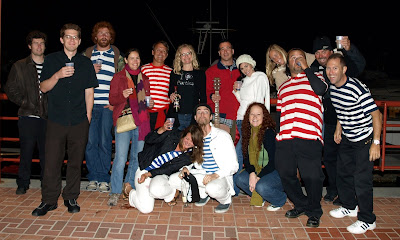 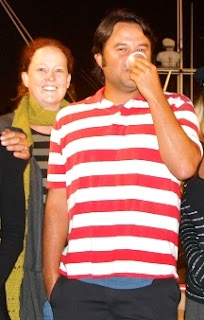 The "Synco pose", as I'm calling it,
has a unique effect.

By exaggeratively drinking as the picture is taken, you succeed in both upstaging everyone else, and obscuring part of your face.  I'm sure it's quite refreshng as well.

Really, now that I think about it, it's genius!
I'm sure we'll all be doing it in the next group shot at Sunset Gondola.
For your enjoyment, and in an effort to give credit where it is due, I've assembled a few more examples of the "Synco Pose" - as demonstrated by the expert himself. 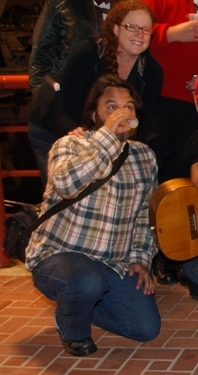 Hey, look at that bird! 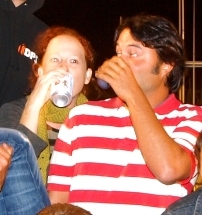 "Synco Pose" in tandem.
and here's my favorite:

The "Synco Pose" in full effect.
Arched back,
knees bent,
eyes bugged out,
and body turned slightly to the side.
Really folks, it doesn't get any better than this.
The man is a triple black belt in the artform.
Posted by Gondola Greg at 1:31 AM

ha! Thanks, Greg. We miss you all too. I'm glad I have this blog to keep me in the loop.