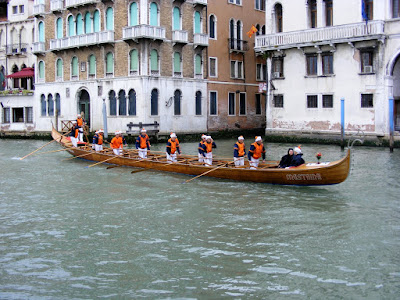 There were a few comments on my last post asking about "nostri amici" in the GSVVM. Far be it from me to miss an opportunity to post photos with rowers in orange and blue.
Before I go further though, I need to point out that Nereo posted a several shots of GSVVM boats in his post "Vogalonga 2011" which I linked to a few days ago.
Now, to explain the images here.
A while back Tamás sent me a number of photos from 2009's Vogalonga, and among them was a series of shots of the all-too-familiar "Mestrina".
Taking a closer look, I saw someone I knew,
quite well in fact,
because...I'm married to her!
Yes, riding in the bow, along with one of the other club member's wives, was my wife Elisa.  My youngest daughter was curled up in the bow as well. 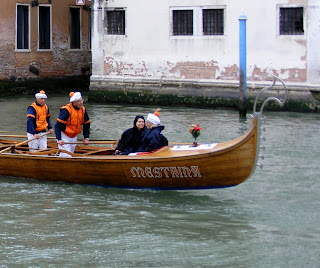 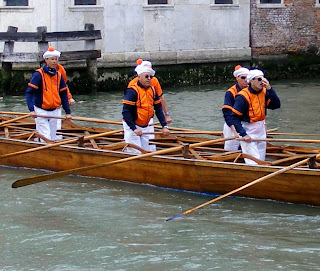 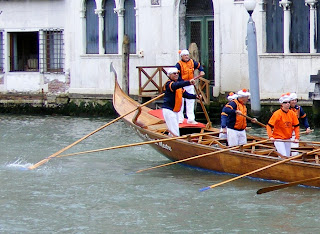 The conditions that day were, shall we say, "challenging" to say the least.
I don't have any numbers to back up such a claim, but when it comes to finishers, I'll bet it ranks at or near the very bottom of all Vogalongas as far as failure-to-finish is concerned.
As the Mestrina made her way through the lagoon, my wife shot a number of video clips which can be sampled from here:
2009 Vogalonga Video - Windy
You get a sense of the wind in this clip.
2009 Vogalonga Video - Crossing the Lagoon
You can hear the wind in this video, later you get an idea of how the vogatori felt about the conditions as the camera pans across some of their faces while rowing.
2009 Vogalonga Video - Approaching Burano
As they approach Burano, we see a nice gondolone rowing not too far from the Mestrina.
2009 Vogalonga Video - Mestrina in Cannaregio
Earlier, in fact before they even got to the starting line, this was the scene as our "amici" in the 14-man boat reached the Canale di Cannaregio after a tough trek from the club.
2009 Vogalonga Video - Craziness in Cannaregio
The drama continued as the crew of the Mestrina took a breather.
Some people were trying to launch a lightweight shell from the fondamenta. A few dragon boats paddled by - no telling whether they even got halfway through the course.  And some rowers in an English-style boat got bumped into a few times.
2009 Vogalonga Video - There Goes My Ride
In what may be the perfect encapsulation of the 2009 Vogalonga, my wife and daughter, who weren't even rowing - abandoned ship in Burano.
It sucked that bad.
After the "Craziness in Cannarego" and before the Mestrina lost a couple passengers in Burano, she passed under the Rialto Bridge, and got her photo taken by my Hungarian friend. 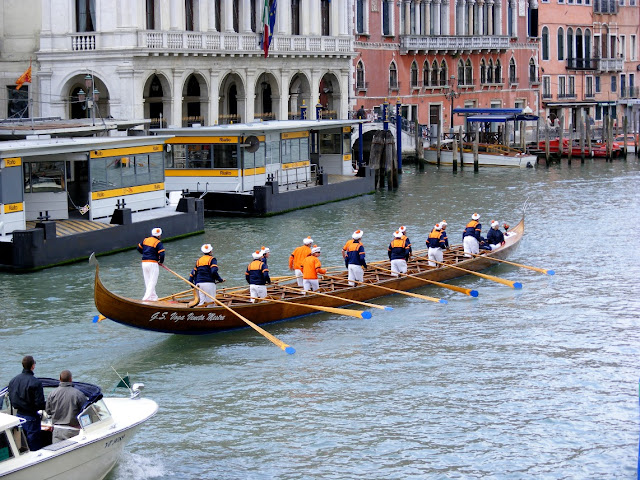 I'm sure that the famous quattordesona was out on the Vogalonga course again this year.
I'll bet it was an easier row this year than it was in '09.
And afterwards, I'm sure that the fourteen club members who were lucky enough to be aboard, got to sign the "big book" that bears the signatures of everyone who's had the honor to row her for an official reason.
Several years ago I had the luck to be one of those who got to sign the book, and I've decided that if my doctor ever tells me that I've got "one year to live", I'm gonna sign that big book and row that big boat one more time...with some of my "amici" from the GSVVM.
Posted by Gondola Greg at 1:57 AM

If someone would visit the Feast of the Redentore:

- How soon do you need to arrive at the site to occupy a seat with a good view of the fireworks display? Maybe 3, 6 hours before or just put up a tent the previous day?

Maybe buying a spectacle motorboat ticket is a better idea, if there is such a service?

- Is there some kind of public transport, bus or train to leave the city, after the show finishes? (I think the fireworks will start 2011. July 16th at 23:30 and last about 45 minutes)

I think trains do not run from VE Santa Lucia after midnight, so how do you reach Mogliano, etc. without a car? If you have a car, is there a big traffic jam, with everybody trying to reach the mainland following the fireworks?