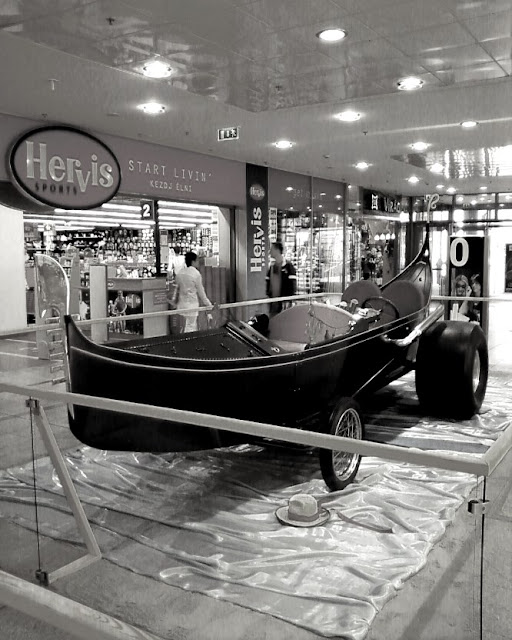 As the publisher of this strange niche blog, I receive some interesting photos, but this collection of images definitely ranks high.
It seems that somewhere in Hungary, in the pedestrian area of a shopping mall, this unusual "gondola" appeared.
Fortunately Tamás was there with his camera to capture these photos. 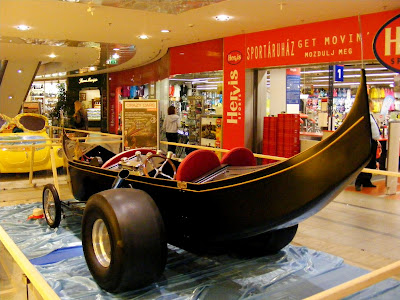 Yes folks, she's a "gondola car".
And those of you who speak German can feel free to insert your favorite gondola/car joke here - as I'm told that "gondola" translates to "car" or vice versa. 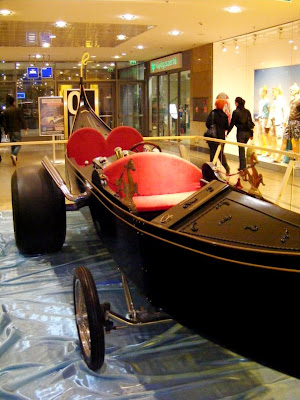 All I know is that this "gondola" is unlike any in my fleet...and I've got some unusual variations. 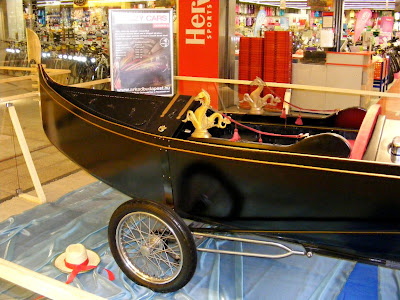 Raise your hands, my amici, if any of you have a gondola with sidepipes! 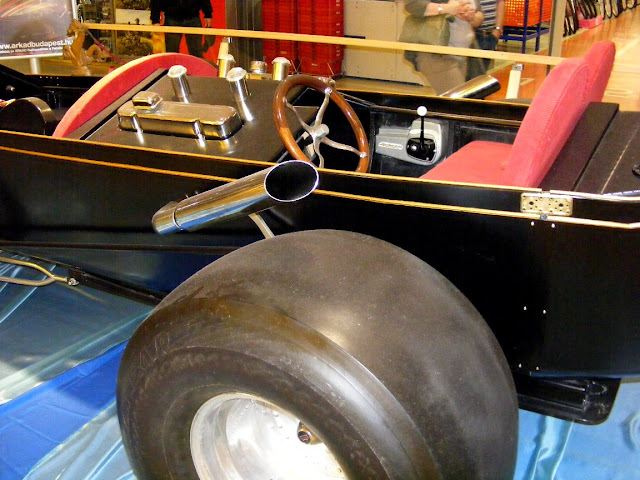 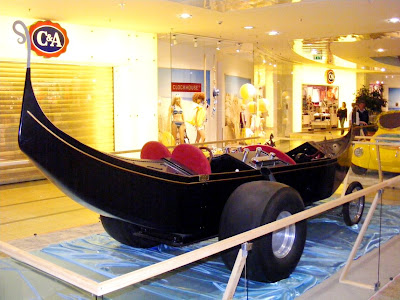 The obvious next question is:
is this for real?
In all honesty I'm still not sure, but there's a display sign claiming that the "gondola" in question is powered by Lamborghini. 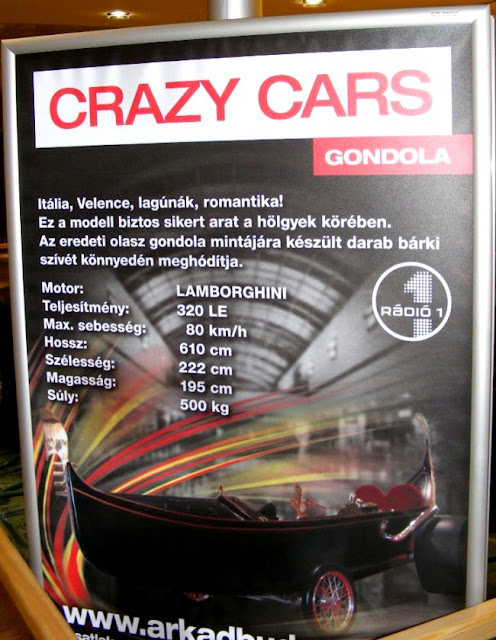 I also couldn't help noticing that the front wheels and the back ones are, well, a bit "dragster-like". 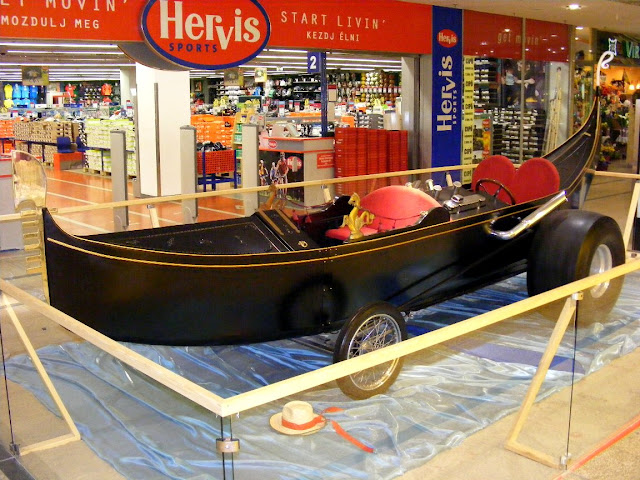 But hey, she's got real cavalli. 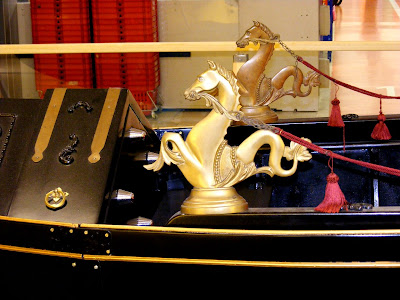 I don't think this one is asymmetrical though - ahh, but that wouldn't do well on the highway now, would it? 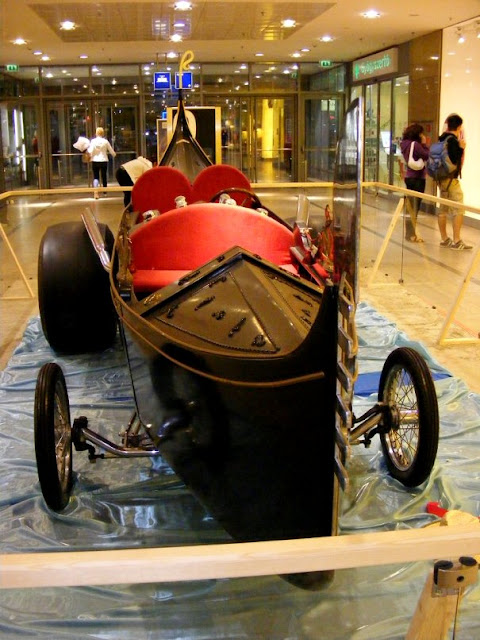 She has a nice shiny ferro - much more impressive than a puny hood ornament on a Mercedes or Rolls Royce. 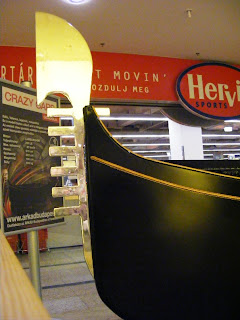 The passenger area isn't quite as spacious as those on her Venetian counterparts, but I guess you've got to make sacrifices for speed on the pavement. 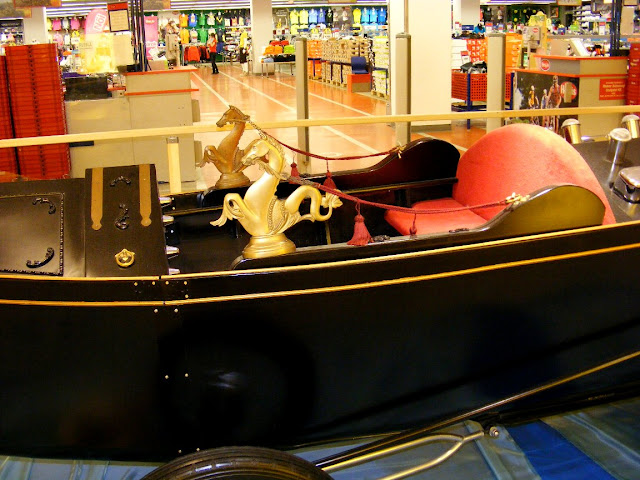 I asked Tamás about this unusual display and he said:

Yes, as part of a collection of "weird cars". I did not have time to venture further inside the mall, but she was located near the front entrance. There was a yellow "sea and beach" themed VW Beetle lookalike right behind her, that was about 2x as long and 2x wide as the original.
I asked why the display was there:

I think the "wacky car" collection was displayed to provide publicity for a FIA WTCC and Maserati touring car championship race, held at our Hungaroring circuit. 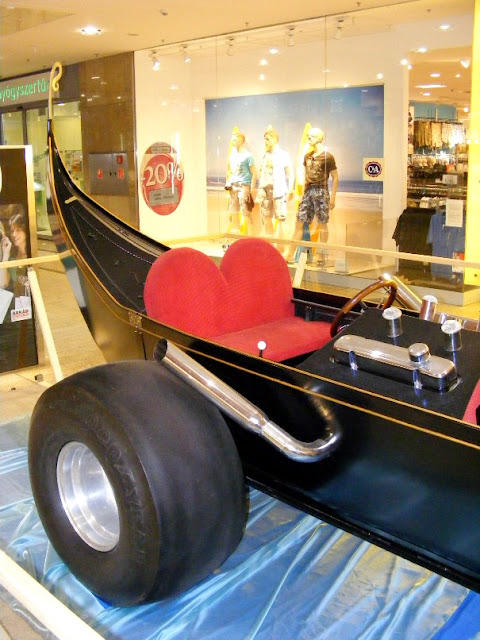 Lastly, Tamás wrote:
The table advertises the "romatic" aspect of the car and how the motorist will win the heart of ladies in such an artfully made, beautiful venetian vehicle. No word on engine muffling, though, so I guess romantic whisper is out of the question. (If I understand correctly, Lamborghini sportscar engine blocks are derived from large motorboat and yacht engines.)
I don't know about the motorboat engine block theory, but I can safely say that this series of photos brings new meaning to the American slang term for a "land yacht".
Any of you gondoliers out there thinking this might work for that upcoming mid-life crisis?
I'm still not sure if she's street-legal.
Posted by Gondola Greg at 1:53 AM

Makes my heart pain to see the beauty and history of the gondola be reduced to such...well, bad taste. But then again, I'm a purist, especially when it comes to Venice and her symbols. :)

> a gondola with sidepipes! ...or Goodyear racing slicks!

Now you mention it, having both of those accessories in such close proximity could be a major fire hazard? That casts some doubt abouts the driveability of this "gondocar". I didn't notice that problem previously.

For Marie: an environmentally friendly gondola car as seen in Venezia. The Biennale is always a good excuse for sacrilege...