Venice from Another Vantage Point

photos by Tamás Fehér
Most photos of Venice are taken from "sea level", or thereabouts.
Sometimes we see shots taken from the decks of cruise ships as they come and go, and once in a while we see a photo taken by someone atop the famous Campanile in San Marco, but there is one other great vantage point - if you can get there.

At the end of a chain of islands known as La Giudecca, there's an island known now as San Giorgio.  Located on the island is the church of San Giorgio Maggiore, and it was from the campanile on that historic island that Tamás took these photos. 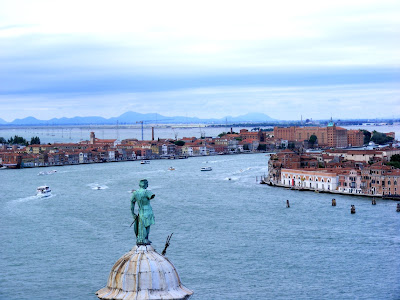 Looking towards the mainland, down the canal della Giudecca, we see part of Dorsoduro sestiere on the right, and some of Giudecca's islands crossing the frame.
The old Mulino Stucky (now a luxury hotel) is easily recognized on the right. 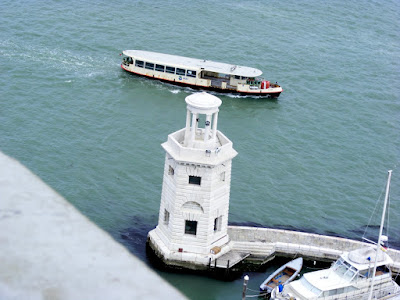 A vaporetto passes by a lighthouse at the end of a breakwater-like wall which shelters the island's quay. 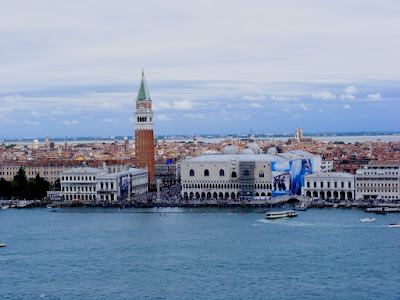 From the peaceful island of San Giorgio, we look across the water to the frenzy that is Piazza San Marco and the Piazzetta. 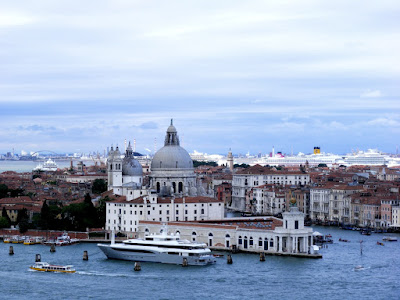 A large luxury yacht floats next to the point of Dorsoduro, known as "Punta Dogana" - a name that goes back to when it served as Venice's customs facility.  Dominating the frame, of course is the Basilica of Santa Maria della Salute - built to honor the Madonna for saving Venice from the plague that was devastating the city.  And behind the city, we see a number of the large cruise ships in port, ubiquitous now in La Serenissima.
Posted by Gondola Greg at 10:58 PM

At San Marco you can wait in line for hours during tourist season. There's rarely a line at San Giorgio Maggiore, and little pressure to "move along, others are waiting."

Personally, I think the view is better because it is out in the water more than San Marco.

THANKS Tamas for the pictures!