Several years ago I held a Carli forcola for the first time.
It was a rare opportunity to hold a piece of gondola history in my hands.

Giuseppe Carli was a remer in Venice. He lived from 1915 to 1999 and was taught at a very young age how to carve and sculpt wood.
In the old days, if parents wanted their son to learn the remer's trade,
they would bring him to the shop at a young age and he would first watch,
and if it was in the cards, begin to assist. Apprenticeships lasted for many years, but the craftsmen who emerged were second-to-none.
This was the kind of world Carli grew up in.
He was one of the last to learn and apprentice in the old way.
Some have labeled him as the "last of the finest", although that would be unfair to those who came after him - guys who hold him in high regard. Remers of today say that he's the "last maestro of the remeri", and they should know; they all trace their trade lineage through Giuseppe Carli.


Saverio Pastor was Carli's first successful apprentice,
he began his studies with the great master in 1975 and stepped out to hang his own shingle in 1980.


Pastor has teamed up with Gilberto Penzo to produce some of the best publications in the business.  It's likely that many of you who read this have at least one of them on your desk or bookshelf. 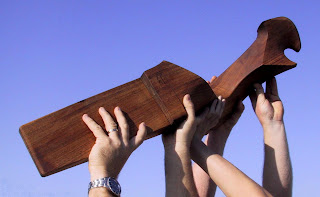 A Saverio Pastor forcola, held in the air by gondoliers in Newport.
photo by Rick Rosen

Later, Saverio Pastor took on an apprentice of his own - Franco Furlanetto, who's workshop has been featured here on the Gondola Blog from time to time.

After an intensive apprenticeship, Furlanetto set up his own shop in Venice in San Polo, not far from the famous church of Santa Maria Gloriosa dei Frari.
After Saverio Pastor completed his apprenticeship, Giuseppe Carli took on another apprentice named Paolo Brandolisio, who continued his studies until Carli retired.

Paolo continues to fill the maestro's workshop in Castello with the sounds of the hand tools and the smell of carved wood. 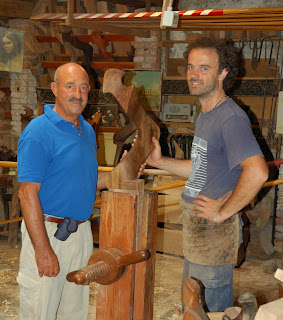 
While there are folks who carve a few forcole here and there, and even some in rowing clubs who are more prolific, Venice currently has only three officially licensed and recognized remers:


These three guys each have their own faithful clientele, they've settled into their own shops and each has his own recognizable style.
But they all share two things:
a passion for the craft
and a reverence for Giuseppe Carli - the "last maestro of the remeri".

And if you're in Venice - stop by and watch things happen first hand.
But remember that they're working, so be respectful, and don't hesitate to make a purchase.  Hand-crafted wood from a Venetian remer has so much more value and significance than a carnival mask or a plastic gondola made in China.


Every day these men carry on Giuseppe Carli's legacy in a way that would make him proud.


Arguably, every forcola or remo that comes out of one of these workshops...
is another piece of gondola history that you can hold in your hands.
Posted by Gondola Greg at 11:51 PM

Many compliments to Rick Rosen for the great shot!
Just few more words to tell you that I'm proud owner of a remo da pope for sandolo built by Franco Furlanetto. Aloha and happy rowing everybody, Nereo