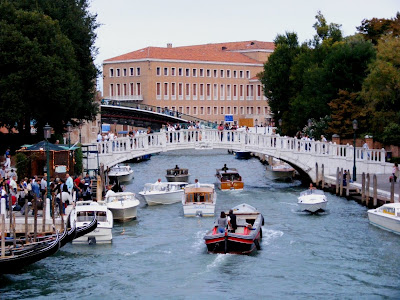 Venice is comprised of many islands with canals running in between them.  Most of the city has no automobile access, with the bulk of car traffic coming and going through Piazzale Roma. Just East of that honking, bus and taxi-ridden exception is a canal known as the "Rio Nuovo".


A few bridges span this waterway, which is a thoroughfare for all sorts of boat types.
In the photos posted here, we see the white "Ponte del Prefetto", and behind it (bordering the Grand Canal) is a green iron bridge known as the "Ponte Santa Chiara".  Both bridges connect the Fondamenta Cossetti on the Piazzale Roma side, with the Fondamenta Papadopoli which flanks the Giardini Papadopoli.


Like all the canals in Venice, there are gondolas traversing the Rio Nuovo, but it also sees a heavy flow of water taxi and cargo vessel traffic. 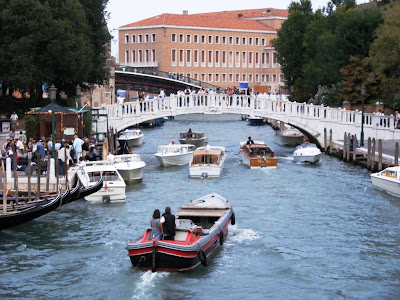 Gondola tails on the left, trees of the giardini to the right.
A moto-topo and a crowd of water taxis navigate in the shadow of the classic Venetian bridge Ponte del Prefetto with it's columns and winged lion carving. 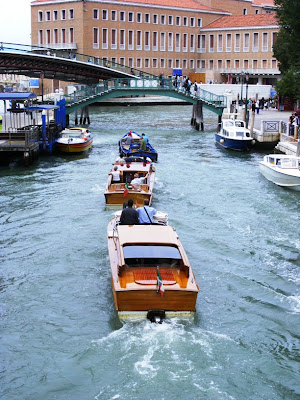 Boat traffic moves toward the Ponte Santa Chiara - which borders the Grand Canal.
The New and controversial Ponte della Costituzione can be seen in the upper left hand corner of the shot.
Posted by Gondola Greg at 11:10 PM

This canal is partially artificial. Was excaved in the first decades of 1900 and used as a shortcut toward San Marco and Le Zattere. We usually avoid to row along this canal due to the heavy traffic of motor boats.
Nereo