GONDOLAS IN AUSTRALIA - "Gondolas on the Swan" 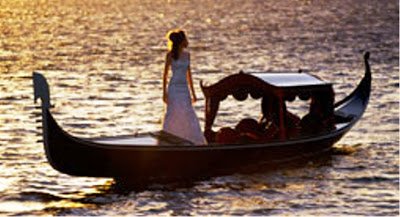 Mention Australian cities and most folks in North America and Europe think of places like Sydney and Melbourne.

Anyone who's spent time here on the Gondola Blog knows Roger Carlson who's operated gondolas in Adelaide for several years. And while it's true that most thriving Australian cities reside on the east and south-east coasts of the continent, there is one exception: Perth

The country of Australia is broken into six states, and the largest, Western Australia, constitutes about a third of the continent.
Sitting at the lower left-hand corner of that state, along the west coast, is the capitol city of Perth.

In 1829, a British settlement known as the "Swan River Colony" was established along a river known by the same name (Originally named by Dutch explorers for it's black swans which are native to the area).
This colony grew and grew, and now the metro area alone, which surrounds the Swan, accounts for one and a half million people.

While the landscape may have changed to accommodate Perth's growing population, the Swan River still flows - providing a great place for a gondola.

There are many different gondola operations in Australia, and some unique boats running in the various servizios, but this one stands out as not only one of the most striking designs among Australia's gondolas, but in my opinion, one of the most beautiful variations on the Venetian model.
I've seen numerous creative departures from Venice's gondola design, but this is one of my favorites.

The black swan is the state bird of Western Australia, and a perfect inspiration for the addition of a gondola to the area.

Many times I've heard folks talk about the similarities of the two, and I've even known of a few gondolas named after these noble birds.

In the case of the boat in Perth, a handcarved sculpture of a black swan's head and neck were incorporated into the tail section.


Alan and Antonietta - owners of Perth's "Gondolas on the Swan" had her built there locally. Addressing the construction of the boat, Alan writes:
The gondola was actually Antonietta's idea and inspiration, she was born in Italy and came to Australia with her parents when she was 3.
For various reasons she was never able to go back to Italy so she decided to bring a piece of Italy to Australia in the form of a gondola. She had been fascinated for many years by a painting she had on her wall of 16C (I think) Venice, with of course has gondolas.
She did the artistic side of things, the seating, drapes, carvings etc. whilst I did the "nuts and bolts" side of things. 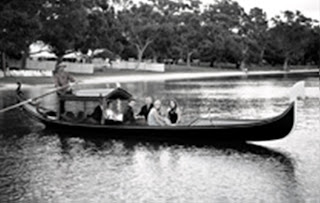 In the case of this gondola, those "nuts and bolts" include a solid-roofed cabin and electric propulsion. As is often the case outside Venice, certain hoops had to be jumped through to get this boat on the water.
we did go to a lot of trouble during the design and building (all done in Perth) to try and get it as close as possible to a Venetian gondola whilst incorporating the requirements of the West Australian Marine Survey i.e. meeting stability conditions, bouyancy, motor (electric), cabin etc.

Construction of the hull was carried out by master boat builders using Western Red Cedar. The canopy posts are mahogany.

Upholstery and curtains were custom made from red velvet. 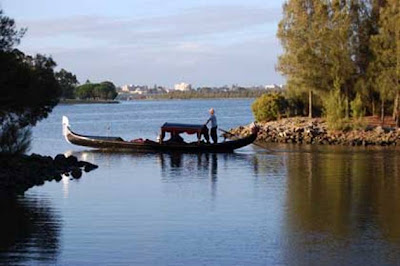 Alan and Antoinetta have been running their gondola for about four years now. I asked Alan about favorite memories so far, and he said:
As for favourite memories, probably just the feeling of satisfaction we get from our clients, especially proposals, which we do more of than anything else. We quite often see dolphins which is always special and and there's usually pelicans and black swans (that's how the river got its name).

To learn more about Gondolas on the Swan, check out their website at: www.gondolasontheswan.com

I would not have known from the long shots that this was not Venetian made. As far as the propulsion: Do you know if the motor was compulsory?
A really beautiful vessel. Great website. I wish I were allowed to hand out beer!

A motor is compulsary on a WA surveyed passenger vessel (as the gondola is.)

However being electric it is silent, smooth and basically the passengers don't generally realise it is powered.

Hi Greg
I have been trying to get in touch with the guys at gondola on the swan but I believe they have closed down. Do you have any details for Alan or antoinetta ?

Hi Nat
We'll be at Elizabeth Quay from March 1st 2016.
Our email is alanww@iinet.net.au if you'd like to get in touch.
Regards
Alan and Antonietta