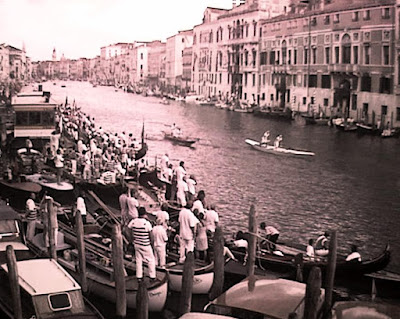 Teams compete for position in the 2008 Regata Storica while thousands watch and cheer.
It is said that the Venetian government held the first "official" regata in about 1300AD.

Prior to that, there were plenty of rowing contests - both sanctioned and spontaneous, but the regata which was held during the Feast of the Marias on or around 1300AD is believed to have been the first.

Because Venetians are, and have always been very connected with the sea, maritime contests have remained popular - often drawing great crowds.

Centuries ago, rowing regatas in Venice served a deeper purpose. Beyond the spectacle that was invariably created, these tests of strength and endurance were military exercises, which helped train and keep men in shape - ready for battle maneuvers at sea.

These days Venice has many regatas, with an official season culminating in the voga-alla-Veneta variation of the World Series, known as the Regata Storica.
Anyone who's a fan or practitioner of Venetian rowing should see it in-person at least once.
Posted by Gondola Greg at 11:34 PM