Austin Expedition - Before the Row 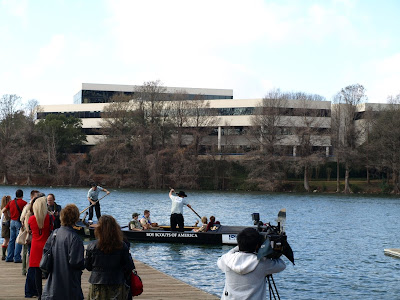 My family and I arrived in Austin Wednesday night, visited a number of places to confirm that they were suitable for the various needs we had for the row, and launched the gondola.
My daughter Cassandra joined me on the boat, rowing in the front for the half mile or so between the ramp and the Austin Rowing Club. We had planned on arriving in the daylight, but that was not meant to be. But the experience of rowing on Ladybird Lake after dark, with all the lit-up buildings was terrific and Cassandra and I will share that memory for years to come.
Thursday morning was "media luncheon day" as it has been with each one-day expedition.
The folks at the Irving Convention and Visitor's Bureau know how to do things in style. Their public relations firm, Tucker and Associates will tell you: "if you want the media to show up, promising a four course meal at the Four Seasons is a great way to guarantee it".
The food was exceptional, a different wine, champagne, or desert wine was paired with each course, and as a newly diagnosed diabetic, it wasn't easy to pass on some of the things brought to the table. I did my best to bulk up on protein and pretend that all those carb-laden delicacies weren't on the table.
After the luncheon, Elisa and I spent some time preparing the boat for the expedition. Our focus was not only on function (making the boat ready for the journey), but also aesthetics. When the news cameras show up, you want to make sure things are clean and shiny.
Chris Harrison flew in on the morning of the expedition.
I picked him up at the airport, we had some breakfast, and talked about the row.
Chris and I have rowed together several times before. We're an odd pair because he's practically twice my size with strength to match. I think it's safe to say that sometimes to keep the boat going straight - Chris has to row easy and I have to give it all I've got.
At around 9:30am, media and Boy Scout personnel began to arrive.
The folks from the Irving CVB and Tucker and Associates helped coordinate things with photographers, news cameras, and keeping things organized.
Chris and I took a few turns in the lake with Scouts, singing, rowing, and taking time to acquaint ourselves with the wind - which was much stronger than we'd hoped for.

Here are a few photos taken of some of the goings on before our final departure. 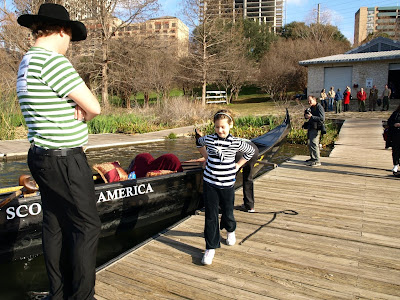 Chris in his trademark black Stetson and my daughter Isabella showing her gondolier spirit in stripes. 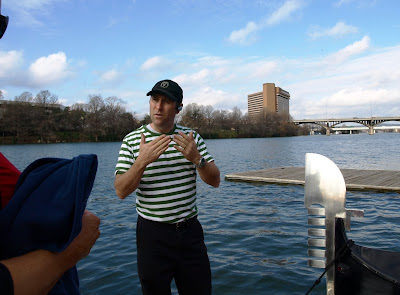 I spent some time explaining the facts and the folklore behind the gondola's most recognizable piece - the ferro. 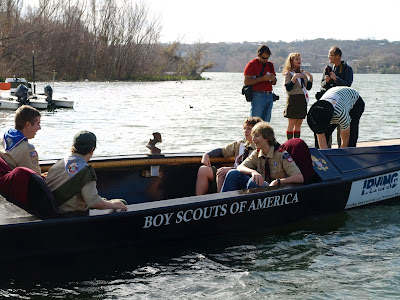 Scouts carrying on before a quick jaunt in the gondola. 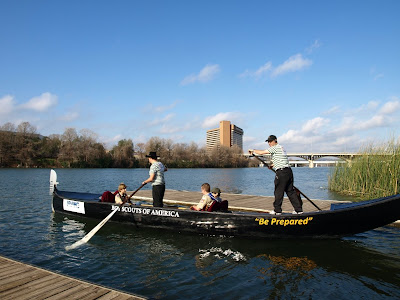 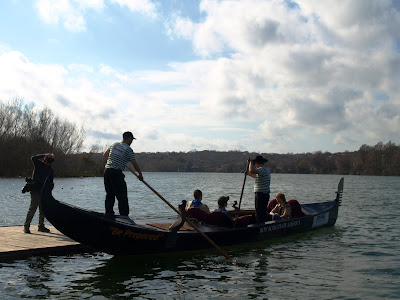 Navigating back in with crosswinds.
Posted by Gondola Greg at 11:12 PM