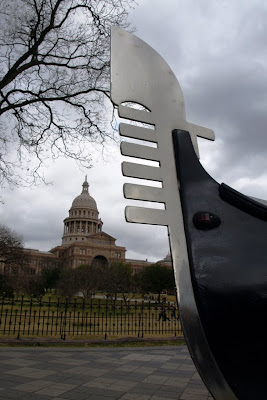 After all the rowing was done, we hauled the gondola out, celebrated (with a nap), and prepared for the parade.
This morning we rose at a truly ungodly hour and trailered the gondola to the starting point on Congress Avenue.
I knew it was a Boy Scout parade, and I knew it was the 60th year they've done it.
I'd also heard that it was a big deal in Texas.
Until today, I had no idea just how big it was.
Troops of all types came in to Austin from every part of Texas for this event.
I grew up in the Scouting world, and I've never seen as many kids in uniform in one place.
It was very exciting.
We had some Cub Scouts and their parents in the gondola, my daughters wore their navy and white gondolier shirts, and I took my place on the poppa with a red-white-and-blue remo.
It was an overcast morning, but that didn't diminish the wind, which almost blew me right off the deck a few times.
My wife Elisa did a great job as driver, and I'm happy to report that while I almost fell off a few times, it was never because of her driving.
Creeping up Congress Avenue, we crossed over Ladybird Lake and ended at the State Capitol building. The Lone Star State has a very impressive capitol building, and we had a full view of it the whole way.
The parade chairman decided to put us at the front of the vehicle column, preceded only by walking participants - no complaints on my end.
I gave my daughter Cassandra the camera again and she promtly burned through a full card of 127 images.
I promise to post a few in the coming week.
Posted by Gondola Greg at 9:23 PM