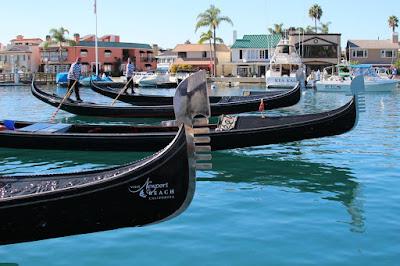 At the 4th Annual US Gondola Nationals in November of 2015,
there were many different races to compete in.
Perhaps one of the most exciting to watch was the Solo Sprint.
It took off right in front of the Bahia Corinthian Yacht Club
(where everyone in attendance was watching),
headed north up the canal,
turned at a buoy in front of the Balboa Island Bridge
(where there were more spectators),
and raced back to finish in front of the yacht club.
Sprints are all energy.
From start - all the way to finish,
it's a matter of burning every ounce of fuel you've got in the tank.
There's not a lot of pacing yourself.
Adding to the excitement, this year we were able to field four gondolas
in each heat.
This means you're not just racing the clock, or one other guy.
You're up against three other guys who all want to get to that buoy first,
not to mention beat you back to the finish line.
Oh, and the challenge of not bumping into each other
can also make for a fun race to watch.

This year the fastest guy on the water in the sprint event was Eric Bender.
Yeah, the guy I like to call "The Snapper", because he actually snapped an oar in the 2013 Solo Sprint competition.
(see "The Snapper") 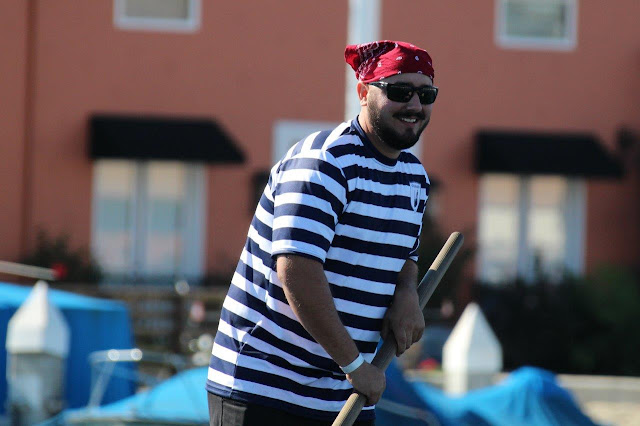 Eric smiling right before his heat in the Solo Sprint event.

The challenge of getting all four guys (and their boats) out,
evenly positioned, and properly spaced...well, it's not nearly as easy
as Marcello and the guys on the dock made it look.
I will be forever thankful for the ingenuity and dedication of the gondoliers who made the starting procedures happen so well. 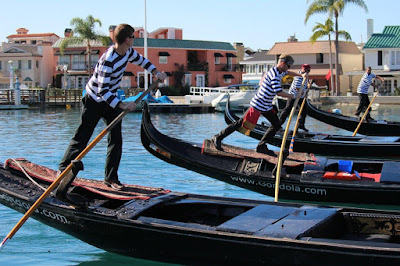 It's officially "GO TIME!"
Some guys bend their oars more than others.

Now and then we saw heats where all the racers were from the same servizio, and that was the case with the heat that our story revolves around.

Starting of, from nearest the dock to furthest, we had Al Macina,
Cole Hanson, Eric Bender, and JR Starlin. 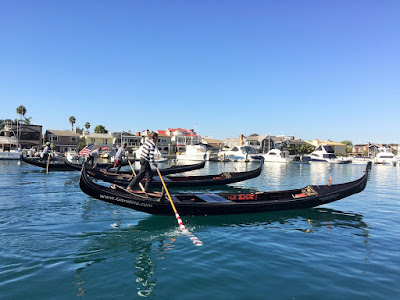 Watching four gondolas take off together is awesome.

The route for sprint events this year covered .58 miles/.94 kilometers.
This was a bit further than previous sprint routes, and having a buoy turn
made for some great spectating.

Cole Hanson begins his turn at the buoy, two guys approach the turning
point, while "The Snapper" begins his charge towards the finish line.
photo by Mindy Schauer

We were lucky to have a GoPro camera mounted on the boat that Eric Bender rowed in the Solo Sprint race.
Thanks to Simon Atkins, here is the video from that heat:

As with many of the other races, the top placing finishers had times
that were very close to each other.
Without a doubt - every second counts. 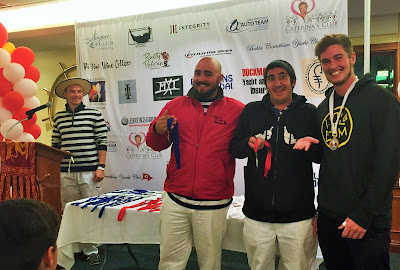