Sunset to Mothers 1 - Food and Music 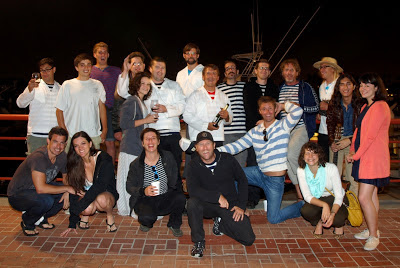 Since right after gondolas hit the water in Huntington Harbour,
the folks at Sunset Gondola have been showing the rest of us
how great it is to get a bunch of gondoliers and friends together.
This week was the "summer edition" and like before,
everyone who came had a great time.
This really is a remarkable thing; remarkable because
we don't really DO anything remarkable, but everyone
comes away saying "wow, can't wait til the next one".
The thing is, everyone there, for the most part, is a gondolier.
While we may not all see eye-to-eye on a lot of things
(there are all sorts of different perspectives represented),
on one very important level, we all "GET" each other.
Nobody understands a gondolier, the things he does,
and the challenges he faces - lilke another gondolier.
And while for most of the time gondoliers are kind of "lone wolves",
this one night every so often, we get to spend time with those who
understand us most - the people who are just as weird as we are.
Like always, things begin at the Sunset Gondola office.
Folks arrive one or two at a time, trickling in from wherever
they were forced to be until they could finally get away.
Some of the faithfuls get things going - things like cooking and laying
out everything that one might need to eat or drink. 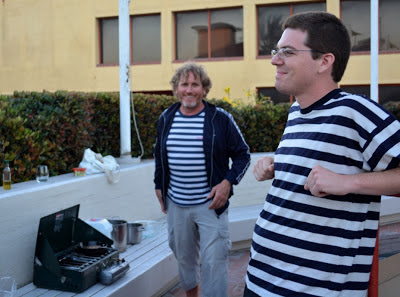 Andrew McHardy works the stove while
Ian McCabe (a.k.a. "Basso") enjoys the moment.
This time we had grilled sausages, crackers and brie,
and various wines and such for starters.
Next we all enjoyed pasta in a garlic and anchovy sauce
with Italian parsley that was just brilliant. 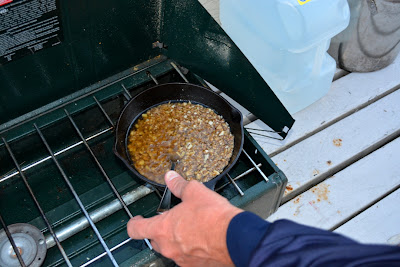 Sauce - on the way to becoming brilliant.
Another standard ingredient in these get-togethers is music.
Gondoliers are at the very least - fans of music,
and in most cases,
musicians themselves.
Some bring their voices, others bring instruments as well.
One of Tim's gondoliers, a guy by the name of Cully, is one of those people who is just fluent in music.  This time he brought a clarinet.
Friends continued to arrive.
At one point Stefano (a gondolier who has rowed in several locations including my own), arrived after a long and serious ride on a bike.
I caught him doing what we all want to do from time to time when we're hot and sweaty:
Later, sitting around and swapping stories, Andrew played an encore version
of his great "Gondolier's Song".
I grabbed my camera and tried to record it, but he was too quick
(and I was too clumsy with the camera), but suffice to say that it was
just as terrific as when he played it under the bridge back in June of 2010.
Here's a post featuring that song:
"The Best Pilgrimage Yet - Gondolier's Song".
Next, Stefano grabbed the guitar and graced us with "Vieni sul Mar" - another song that gondoliers around here like to join in on.
Posted by Gondola Greg at 11:00 PM

KlingeltoneKostenlos said...
This comment has been removed by a blog administrator.
August 24, 2018 at 12:05 AM