There are so many ways to secure a boat.
In Denmark, Simon Bognolo and his father Franco have come up with a system that any self-respecting gondola would be happy to have. 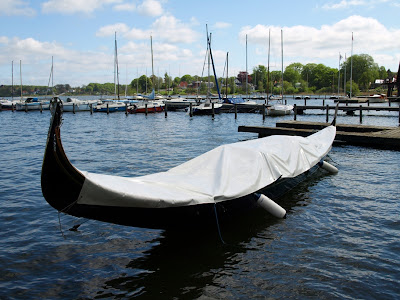 First of all, the gondola is kept on a four point tie,
which keeps her from bumping against docks or walls.

Another benefit of the four point tie system is that if the gondola is tied far enough away from anything, kids and drunk idiots aren't as likely to mess with the boat - a problem they used to have there. 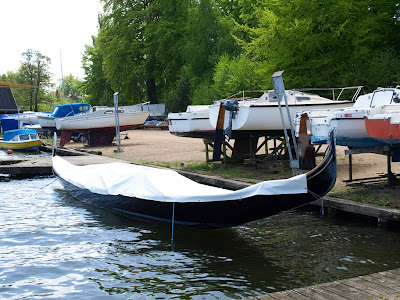 In the case of our friends in Denmark, the system worked for a while - until someone figured out that if they messed with some of the lines, they could mess with the boat.
So when I showed up in Copenhagen, Simon showed me how the two dock lines on the outside now had chains incorporated, which were padlocked to the docks.
As Simon explained to me:
"Sure, someone could still get to the boat...but they'd have to get wet to do it."
When it comes to kids and drunk idiots, a night-time swim in frigid Scandinavian waters can serve as a convincing deterrent.
Speculate all you want, but since they added the chains and locks,
Simon and Franco haven't had any problems. 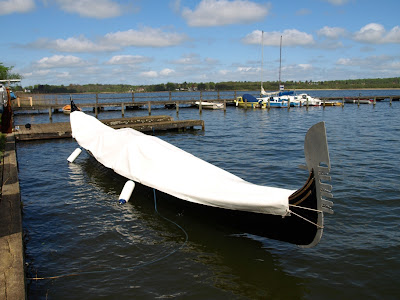 Another thing they experience in Denmark is rain, and as you can see,
the gondola has a very effective watershed system, which involves a waterproof tarp which fastens to buttons on the side of the boat with bungee loops - strong bungee loops.
I helped fasten some of them, and I can attest to the fact that they will hold that tarp tight to the boat no matter what the weather does.
They held one of my fingers there for a few minutes.

So if you're looking for design inspiration, or have had problems with kids and drunk idiots messing with your gondola, take a look at Simon's four point tie system.
It works like a charm.
Posted by Gondola Greg at 1:47 AM

The boat is tied sideways in a wide slip. The outter two docklines are the ones with chains and padlocks. To access the boat, Simon unlocks the two outer docklines, which allows the boat to drift up against the wall that runs parallel to the gondola.