A few days ago my family and I were in Berlin, touring areas that had been revitalized since the fall of the communist regime. My wife had been there in the 80's and saw first hand what it looked like. She was amazed at the change in things. Architecture, mood, and freedom have all seen major changes. Our tour guide got quite a surprise when he claimed that Berlin had more bridges than Venice - the whole family jumped on him for saying such a thing.
As we drove, I did see a heck of a lot of bridges, but no gondolas.
I saw lots of pedicabs, some horse-drawn carriages, and one very strange limo (all of which will probably end up here in a future post).
It became clear to me that:
A. Berlin needs a gondola, and
B. Berliners are creative with their modes of transportation.
Nothing makes my point more clearly that the "Bierbike". 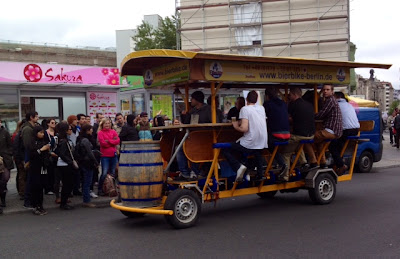 Here's an option that gives commuters the opportunity to get a workout...while enjoying a frosty cold one.
Brilliant!
The height of German engineering.
And it also clearly evidences the fact that capitalism is alive and well now. The owners of the Bierbike make money while getting their patrons to do all the work - the vehicle appears to be completely human powered.
Tom Sawyer would be jealous.
I was jealous, as I stood there just a stone's throw from "Checkpoint Charlie" and the Bierbike went by.
I love German engineering.
Posted by Gondola Greg at 6:38 AM