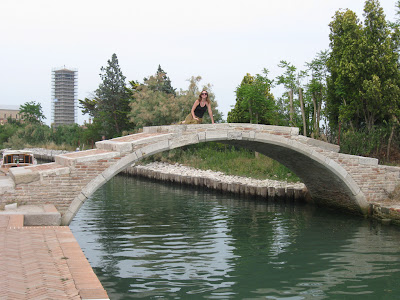 Torcello.  I haven’t been there yet myself, but according to some of the things I’ve heard, Torcello is very close to the Venetian equivalent to a “ghost town”.


Someone told me
“everyone used to live there, now nobody does.”


By “used to” they meant back in the 11th Century or thereabouts.
This overly foliated island, which is now home to about twenty people was once the most populated place in the lagoon.


Now the place is all but deserted.


But there is an eye-catching bridge known as the “Ponte del Diavolo” which even by today’s masonry standards, is an impressive span.


This “del Diavolo” thing is something you’ll encounter in several places in Europe.


In English speaking places they are called “devil’s bridges”, and generally fall somewhere between “impressive” and “mind blowing” from an engineering standpoint.
Various takes on the name include stories of deals with the devil and ways the devil was tricked or outwitted (think “The Devil Went Down to Georgia” but with less fiddling and more bridgebuilding).


This bridge is on the route to the cathedral, so many people see it, and cross it.  I think it’s more dramatic because of the absence of railing. Kathy does a great job of adding some perspective as well.

This island also has a sizable feline population, the stone throne of Attila the Hun and two large churches, which the venetians, out of respect, would not demolish for stones.

I was actully suprised the Pope couldn't find the time to see Torcello during his visitation of Veneto this year, considering the importance of those ancient churches.

Even more suprising is that a few decades ago there used to be gondoliers on the island. An 1974 guidebook says it costs 6,000 lira (i.e. next to nothing) to ride from the motoscafo pier to the end of the canal near the Torcello basilica and how the blooming trees arching over the little canal look beautiful from a gondola.

I wonder if gondola service will return when restoration of the island is completed? I was there this spring and it looks like the works did really progress since 2009, but lack of a direct vaporatto connection from Venice/mainland does not help with Torcello visitors.

Hey Greg next time you're in Venice I'll plan a one day trip to Burano and Torcello on our caorline.

Nereo,
You've got a deal!
I'm already thinking about it.
:o)