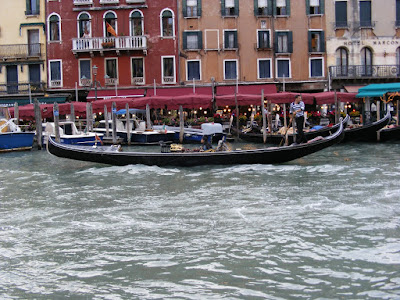 Today, August 8th, 2011
marks the four year anniversary of the Gondola Blog.
What began as a simple place to chronicle the daily adventures of our expedition down the Hudson River (from Albany, New York down to Ground Zero in Manhattan), became an outlet for other things "gondola".
I figured I'd just keep posting until I ran out of photos, stories and information to share.
With the help of many of my friends, I haven't run out yet.
Four years.
That's high school for most of us,
a bachelor's degree if you play your cards right,
a presidency, if you don't get re-elected.
It's also the average lifespan of a guinea pig,
the maximum lifespan of a hamster (although most kick off earlier).
Some experts also give the same lifespan to a Macbook.
An elephant can have two babies in four years...
unless she has twins (hate to be that elephant).
Speaking of elephants, I heard that someone in Japan hopes to have cloned the Woolly Mammoth back into existence within four years.
I'm not holding my breath - they told me as a kid that we'd all have flying cars by now.
Facebook just celebrated the four year mark,
and some idiot in California just got a four year sentence for stalking people on Facebook for some sort of badness.
Enough buttercowing about "four years".
Looking back, we've seen gondolas from all sorts of places, on various continents - and more than a few in Venice too.
We've talked about different types of boats,
and heard stories from and about gondoliers and rowers of all types.
We've taken a look back in time using old postcards and stereoviews.
We've also followed some expeditions and special events.
Over the years, the Gondola Blog has seen an increase in readership.
I've been honored to hear that several of you have made this blog part of your daily routine.
I've done my best to keep the Gondola Blog consistent, with at least one post daily.  Sometimes photos, sometimes musings, now and then it's something significant.
Now and then I don't have enough time to keep up, or have nothing worth posting, but I try my best and I thank you all for reading.
Warm thanks,
-Greg Mohr
Posted by Gondola Greg at 1:43 PM

Keep up the great work, Greg! This is the Synco family saying hi from Edmonds, WA.

Well, I haven't been here all four years, however, I've enjoyed the time I have had. Always an inspiration.

I can tell you one thing. I want that boat (in the photo). What a beautiful thing.

... and the many years ahead, hopefully!

BTW, thanks for using the photo on this occasion!

(Actually I wasn't aware of the gondolier looking back until your post pointed it out. It's not the first time I've glossed over curious details in photos, only to find them emphasized by Greg in the blog, e.g. the tele-lenses shooter at Regata San Andrea).

Maybe it comes with being a gondolier to have a good eye for minute detail. After all, the boat must be in perfect shape every time!)