I received this photo yesterday from John Kerschbaum of Gondola Romantica in Minnesota.
At first glance I knew three things for certain:
1. I'd never seen anything like it before,
2. It absolutely HAD to go up on the blog,
3. Some day, if I was lucky, I'd get a chance to try "pumpkin paddling". 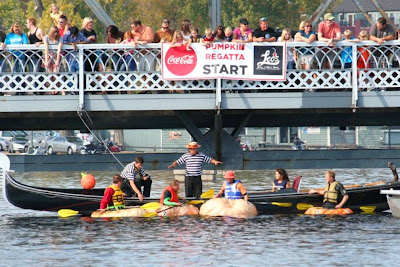 Aboard the gondola, from left to right:
gondolier Alex Shern (on the bow), Gondola operator John Kerschbaum, and gondolier Amy Ebertz (in the passenger seat).
Now, to explain a little about what we're looking at.
Last year, the Stillwater, Minnesota chapter of the Independent Business Association held their first Harvest Fest.
The event was a big success.  This year's edition included more reasons to attend, including a true-to-life "pumpkin regatta".
Pumpkins are often carved to make jack-o-lanterns, but hollowing one out to serve as a vessel - well that takes a much bigger gourd than something you'd buy in the produce department.  The pumpkins seen here are of a special variety, I'm told they're grown mostly for uses other than making pie.  Display is one obvious application for such a pumpkin.  They are also popular with "pumpkin drops" - where the pumpkin is dropped from a height guaranteed to yield destruction, and great reaction from spectators.
The really big ones often end up in a weigh-off.
The 2010 Stillwater Harvest Fest was the scene of a new record-breaking pumpkin weigh. A contractor from Wisconsin managed to grow, and transport a humongous pumpkin that tipped the scale at 1,810.5 pounds -  a full 85 pounds heavier than the current record holder.
More details can be found at this website.
And as previously mentioned, huge pumpkins can also be carved into boats.
Getting back to the above photo, I don't know how he got the job, but John Kerschbaum was the starting judge.  Standing on his gondola, he briefed the "pumpkin paddlers" and helped them before the race. In my opinion, you can't buy better visibility for your gondola company than that.
The weather was perfect, and thousands showed up for the Harvest Fest.  Not surprisingly, someone had a camcorder and captured the race for all of us to enjoy.
Here's a link to the clip on YouTube.  I take no responsibility for the off-camera conversations and commentary.
Talking with John on the phone, I asked him about the job he had as starting judge.  he told me that once the paddlers had gotten situated along the rail of the gondola, he said:
"ok, here are the rules: there are no rules, so keep it interesting".
And at the sound of the horn, they were off and paddling.
Well, most of them were.  The guy stuck paddling in a circle is actually a candidate for mayor right now (yes, insert your favorite wise-crack here), John told me "I think he got a bad pumpkin".
To read more about this year's Harvest Fest, check out http://stillwaterharvestfest.com/.
More fun details can also be found on the facebook page for the event.
If you still haven't gotten your full pumpkin regatta fix, an image search of "pumpkin boat race" on Google will give you numerous funny pictures from pumpkin regattas in other cities.
And to see John Kerschbaum actually rowing his gondola, check out the Gondola Romantica video on YouTube.
Posted by Gondola Greg at 3:01 PM

Here in Hungary, a long time ago, parents used to tell their kids large pumpkins are eggs laid by broodmare and will hatch a foal.

In Germany, giant pumpkin boat races are sometimes motorized, as can be expected from an automotive superpower...