Last night we arrived safely with gondola in-tow, to Oklahoma City.
The drive was a bit sketchy at times, as we drove mostly in the rain.
Several times it was a total downpour, making it hard to see trucks and other vehicles that were only 50 feet ahead.

After parking the gondola on-trailer, and giving her a quick examination, I got a tour of the Chesapeake Boathouse, where we'll launch our expedition from.
What an amazing facility.
I had expected to see a few crews and their boats.
Instead, there were so many people, carrying around so many boats, that it was hard to know where to walk outside the building.
Inside, the Chesapeake Boathouse is a big, open, modern piece of architecture.
It's something Oklahomans should be proud of. 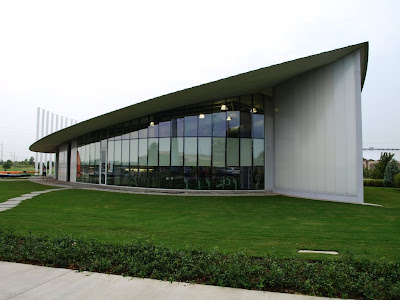 The Chesapeake Boathouse during a rare quiet morning.

I was impressed to see how much rowing has caught on in this city.
Sure, there are college crews hoisting and carrying their shells out the door, but other folks, of all ages seem to be catching the fever and rowing, some signing up for classes because they've never rowed before.
I got to watch first-hand as a student received training for the first time from Allison Derrick of the Boathouse.
It was exciting, and I wasn't the only one cheering her on, an eight-person crew, who was loading their boat into the water, cheered, clapped, and shouted encouragement.
Late this morning, Elisa and I attended a media luncheon that was hosted by the Irving Convention and Visitor's Bureau.
Lori Tucker of Tucker PR planned and executed it, as expertly as she did for a similar media luncheon in Houston prior to our expedition there.
Tucker PR was instrumental in getting us visibility and media attention back in October of last year during the Hudson River Gondola Expedition.
We are very lucky to be working with Lori and her staff.
After the luncheon, I cleaned up the gondola and prepped her for launch.
After replacing one of the side decals that says "BOY SCOUTS OF AMERICA", I gave her a full wax and buff with one of my favorite products - black wax.
Next I positioned the trailer for launching.
At 5pm today, for the first time ever, a gondola graced the waters of the Oklahoma River.
Of course the guy rowing it was me in shorts and a dirty t-shirt, with only my wife with me to witness the event.
But it was stil fun. Later, as I rowed, I received funny and confused looks from many rowers in their shells.
After launch the gondola I secured her at dock, placing fenders and making sure she would withstand currents and winds. 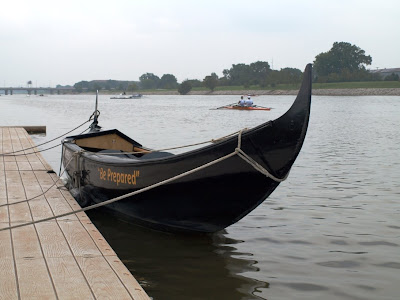 During the prep time, I spoke again with Allison Derrick, and she told me that they would be removing all of their boats in anticipation of the increased flow and debris coming down the river due to rain.

This was starting to sound a bit like the Buffalo Bayou in Houston.

The flow and debris aren't for sure at this point, but as I write this, we're watching the weather forecast dlligently and we're preparing for a number of possibilities.

Chris Harrison arrives tomorrow morning around 7:45 (flying in from DFW), I'll meet him at the gondola, and we're planning on a 10am departure.

Pray for good weather my friends.


to learn more about the Chesapeake Boathouse, visit
www.chesapeakeboathouse.org
Posted by Gondola Greg at 8:08 AM