The Wall at Squero San Trovaso

There are many things about Squero San Trovaso
that set it apart from other gondola yards.

It's by far the most photographed squero in Venice.
All the guidebooks include it as something to see that's truly Venetian.

It's an active yard, with something to see just about any time you stop by to watch.  Some activities can easily be seen from across the canal
(where most of the tourists go to peer across the water).
Seeing a couple guys turn a gondola up on one side by hand or a group of workers wrestle a boat out of the water on rollers are good examples.

Other things are best appreciated from inside the place.

I should make it very clear, however, that most outsiders should not try
to get into the squero unless involved with a film crew that's made prior arrangements.

Remember - these guys are workers.
They've got work to do.

Imagine if a bunch of tourists with cameras decided to just "show up" at a construction site and try poking around, or if they stepped out of the elevator at a law firm and started trying to chat people up about "what it's like to be a lawyer".

However, if you're a gondolier who has a Venetian friend, the right attitude, some photos of your boats on your phone, and some lucky timing - you might just manage to get in the door.

I'm posting a few different photos here this month from just such a visit.

Walking around (and trying to stay out of everyone's way), I noticed a certain wall, which I'd seen a few hats on in previous years.

It was clear that the wall had received some attention since the last time I'd been there.

My friends, I give you: The Wall. 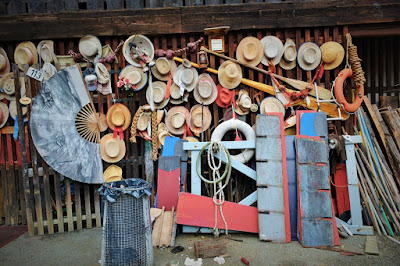 I imagine it started with one or two hats, and, well,
somewhere things got serious.
Now it reminds me of an old restaurant that my folks took me to
as a kid called "Bobby McGee's".
The only thing missing is a bent trombone and an old baby carriage.
What a beautifully chaotic work of art.
Posted by Gondola Greg at 11:00 PM

Hello, I would be curious to learn about that grey (oriental?) fan, is there a story related to it? Thanks!

It certainly does stand out.
I don't know the story, but if I find out, I'll let you know.