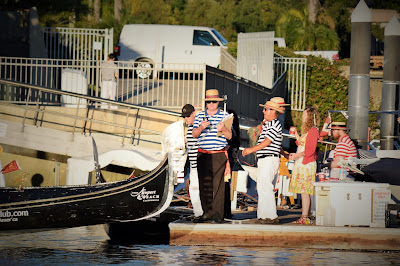 Whether you're in a field of several boats, or rowing a time-trial,
It's a race.
He who crosses the line with the shortest time wins.
For this reason, we saw many competitors go totally nuts this year,
sprinting to the finish line.
Lots of guys had to sit down after they finished.
Some even laid down on the deck.
As Mike Ruffino phrased it:
I wanted to push my pace, because I wasn’t just racing the three other guys, I was racing everybody.
(quote from "Ruffino - From Cage to Rage")

Some competitors managed to edge out others by only a few seconds.
As you can imagine, there was a lot of attention focused on what was happening down at the end of the dock, where a guy with a stopwatch was recording those finishing times.

At the center of it all were a few guys who went above and beyond,
to make the 2015 US Gondola Nationals run so smoothly.

Mark Schooling of Gondola Paradiso,
and Matthew "Marcello" Haynes of La Gondola
carried that burden like pros, with a couple other guys helping along the way.

In the above shot, we see Mark Schooling recording the exact time the ferro crossed the line during one race, with several of us looking on.
Posted by Gondola Greg at 11:30 PM