Ruffino - From Cage to Rage

Photos by Mindy Schauer of the Orange County Register 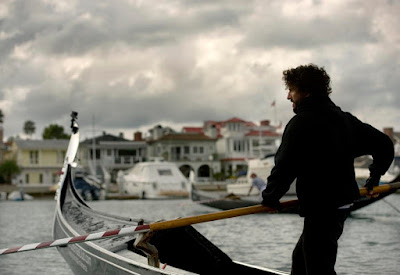 The Fight
Next Level Sports Complex in Garden Grove, October 24th.
Mike Ruffino, who'd been training for quite some time,
prepared himself for a unique competition;
one that wasn't so much a challenge against another man as it was one against himself.
Like so many contests, it wasn't so much a question of winning or losing as it was a question of how much of himself he was capable of throwing into it.
He centered himself, imagined what would happen next, and called upon his training and his memories of training.
When it was time, Mike stepped into a 27 foot cage with a referee and another man.

Why was Ruffino in a cage fight?
it was partly a bucket list thing,
not only, like so many thing Mike does, a challenge against himself;
but also, because in his own words, he believes in heroism:
I believe in heroism.
I believe it is not exclusively reserved for military,
law enforcement, or fire fighters, but that it is a trait of the common man. I believe that if you have the ability to help someone in dire need, then you have the responsibility.

I have been very fortunate to have fared well in all of the worst-case-scenarios that have crossed my path,
but what if I see someone being set upon by another who actually knows what they are doing?
A trained aggressor who knows how to really hurt someone?
My beliefs command me to get involved, and my ability or inability to help someone when they truly need it directly relates to how well I prepare ahead of time.

Mike stepped into the ring, fought like mad, and held his own admirably.
A couple rounds later he was the subject of a TKO.
His opponent had won the match, but Mike had won on so many levels - conquering his own needs and fears, learning what it's like to be in such a situation, and truly becoming more prepared for such time as he might be called upon to be heroic.

The Race
Three weeks later Mike stepped on the back of a gondola in Newport Beach to compete in the solo distance race:
2.2 miles around Balboa Island, Collins Island, and Little Balboa Island.

Preparing for the race, he once again centered himself, imagined what would happen next, and went out with the plan to fight like mad and demand everything of himself.

Race Mates
As it happened, Mike ended up rowing in a heat where all four competitors were from his home servizio – Gondola Company of Newport.


I’ve been fortunate to share the water with these guys for years
(Mike's been there since 2008).
They’re a great bunch of guys who, like most gondoliers,
really love their job.


Along with several rowers, there was a noticeable fan presence
from friends and family, some even showing up with signs.

When these four guys shoved off and started rowing,
there was a lot of cheering going on.

Many of us caught the fever, and found ourselves cheering “GO G-CON!”.


I spoke with Mike Ruffino about the heat.


He said:
Rowing with all GCON was cool because it felt like we were all representing our dojo.


Being on the water together, we were also able to encourage each other.

With the same intensity he’d given to his cage fight in October,
Mike took off like a madman.


By the time he reached the Balboa Island bridge he was already
a few boat-lengths ahead of everyone else.


The trip up behind Balboa Island was smooth,
allowing him to move his gondola swiftly in the wind-shadow.


Rounding the corner at the tiny Collins Island,
things got a little choppy – but nothing a good gondolier can’t handle.

Even though he was ahead, Mike wasn’t taking it easy.


He’s never been the kind of guy who just does the minimum,
and today was no exception.


I wanted to push my pace, because  I wasn’t just racing the three other guys, I was racing everybody.


From time to time, boats started to encroach.
A couple of times I had to shout for some people to get out of the way, which was kinda fun because I like to yell.


Never the quiet type in competition,
I’m sure he benefitted from the energy-release of yelling.


Ferry crossing
Mike had an interesting thing happen as he crossed the Balboa Island Ferry.


I hadn’t been on the ferry in a while, so I assumed that when they dock, they go all the way in.


He’d timed his pass well, planning to move by the back end of the ferry right after it docked.


He watched the ferry enter the docking cutout, expecting it to keep going further in:


I didn’t realize that the overhang was normal.


I’d been trying to stay as close to the shore as possible.
When the back end of the ferry didn’t disappear into the cutout,
I had to do a quick stop and 90 degree turn.
At that point I started to pick it up and try to navigate effectively.

Sixty Degrees
Thanks to photographer Mindy Schauer of the Orange County Register,
we have some dynamic images of Mike Ruffino’s trip to the finish line.


The last turn of the race is a tight sixty degrees, at the tip of Little Balboa Island.


On that day, rowers were approaching the turn with the wind at their back, and turning left into the leeward side of the island.


Hit the turn too fast and you’ll either overshoot it or spin out.

What I thought was best to do with that turn, it was all power strokes, and after the turn, a really hard back stroke.


It was at that point where Mindy snapped what I’ve been referring to as
the “dance photo”. 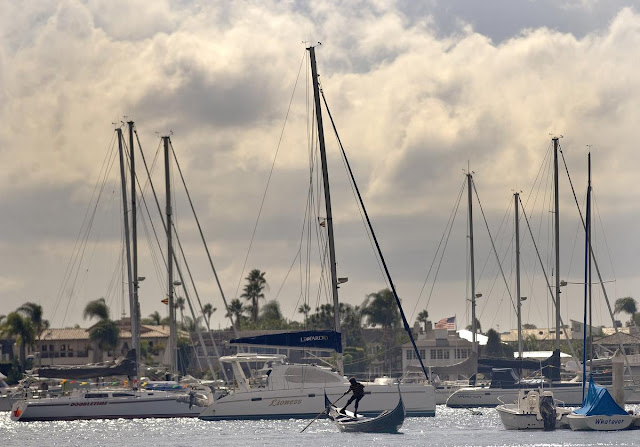 It looks almost like Mike’s dancing on the back of the boat.


Sean Jamieson of The Gondola Company in Coronado even told me it looked like Mike was breakdancing on the gondola.


Pure Rage
With the finish line within view, Mike went all-out crazy.
He channeled pure rage into the remainder of his run,
rowing with an intensity I’ve rarely seen.


I didn’t really want to finish without giving it my all.


The only thing worse than losing a race, is finishing and knowing you had more you could have given.

other training exercises with his readiness and level of conditioning.


In preparation for his cage fight, Mike had trained in martial arts – boxing, kickboxing and grappling with a mixed martial arts center known as Bearpit.

Mike also does a variation of hot yoga which includes weights.

Some of you might be tired of hearing me say that gondoliers are interesting, but Mike is a prime example.
In addition to all of the above, he's been a sculptor's model for seven years now. He's worked with world renowned artists and some pieces based on his posing have been displayed in galleries.

His bucket list no longer includes "cage fight,"
but there are plenty of other interesting items.
He'd like to work on a cruise ship,
drive in a demolition derby,
and "bulldog and alligator."

On Christmas Day he'll head to Northern Ireland
and work at the Vagabonds Hostel (another bucket list item).

The Photo - I Mean THE Photo
With all of the sculpture posing and other remarkable "image captures" he's ever been the subject of, I really don't think anything can compare to the photo Mindy Schauer snapped of Mike Ruffino, just a few strokes from the finish line. 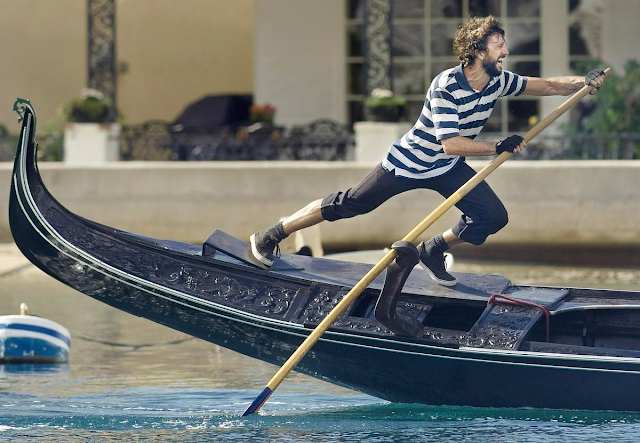 If the world sees only one image of voga-alla-Veneta in the United States,
I hope it's this one.

Special thanks go out to the staff at the Orange County Register
not only for showing up and taking great images,
but also for allowing me to post them here.
To see the full slide show, go to:
http://www.ocregister.com/articles/gondola-692353-gondoliers-newport.html

Simon Atkins managed to get a GoPro camera on that boat before the race,
and the full run is viewable on YouTube at:
https://www.youtube.com/watch?v=NYzlZ2_RckI 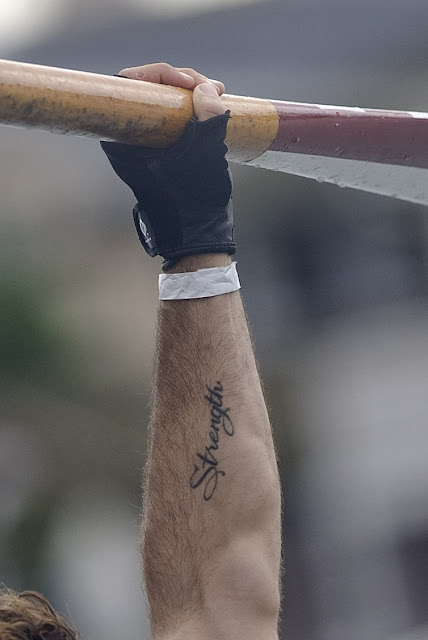 photo by Mindy Schauer
I have it on good authority that Mike will be joining us next October
in Minnesota for the 2016 US Gondola Nationals.

I can't wait to see him row again.