The Circle of Six

So many amazing things happened at the U.S. Gondola Nationals,
and almost all of them were photographed.
Almost.

In between the team arrivals, oar snappings,
and captivating wins and finishes,
something quiet happened.

It wasn't showey or loud, and in fact unless you were part of it,
you might not have noticed it.

Several times, as we were navigating our way through this remarkable event, trying to decide the best solutions to the last-minute challenges presented by time, weather, and the differences between boats, The owners of six gondola operations stood in a circle and reasoned it out.


This is the closest thing we have of a photo of the "Circle of Six",
it's a low quality frame from a video clip when there were five of us. 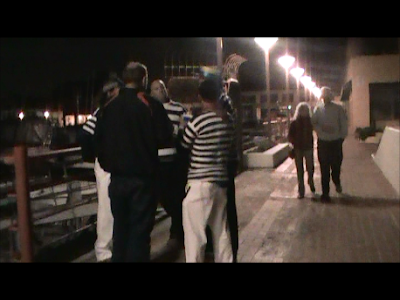 The guy in black is Joe from Boston, going clockwise we see John from Minnesota, Sean from Coronado, Marcello from Providence,
and me in the black cap.
Tim wasn't in the circle as he was tending to some sort of hosting duty,
but we grabbed him shortly after.

Each guy had his own perspective, based on experiences and the way he was seeing things unfold.  Everyone was wise and fair, open to hearing what the other guys had to say.

There were no titles, nobody had been elected to a position,
no credentials other than "hey, those are some of my guys out there and here's what they're dealing with", which was followed by "I know what you mean,
let's grab _____ and see what he thinks".
In a short time we were all there, with various gondoliers stepping in from time to time, either watching or adding their two cents.

This "Circle of Six" made the difference in more ways that I can count.
I have great admiration for each of the guys in that circle,
and it was an honor to be a part of it.
Posted by Gondola Greg at 7:30 PM