Christmas Boat Parade 2012 - Back on the Water with the Lucia 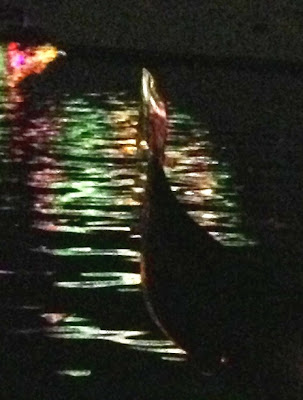 Boat Parade hit Newport last night, but I was busy.
As the fireworks went off and the noise began, I was knee deep in freezing water, perched precariously on the supports of a trailer as I did my best to heave a gondola into place.
I had just launched the Curci Gondola (a.k.a. "Lucia") after some important maintenance, and was working hard to get one of my motorized boats situated right.
As the honking, cheering, and amplified music echoed through the Back Bay, I wished I could be out there rowing instead.
Tonight, after a day of prepping the boat, I took some eager parade-watching passengers out on the Curci Gondola, and it was a great night.
Here's a short video clip I shot of the front of the parade as it began to pass by.
One of the things I love about rowing on parade nights is that we stick together.  Tonight I was rowing with Bob Millspaugh and Mike Bronstein.  We had separate passenger groups, but there's strength in numbers and on a crazy night like this, it doesn't hurt to know that there are two other guys watching your back.
As you watch the video clips, you might see the ferro of a boat or two - catching the reflection of lights on polished metal. 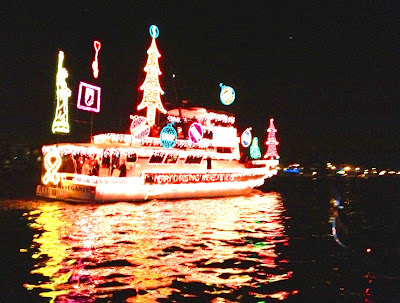 There are a few boats that can be counted on, year after year,
to be amazing.  For the last two decades, El Navegante is at the top of that list.  This year I was happy to see that they are paying tribute to our military veterans.
Here's a short video of the boat going by:
Another motor yacht that got a lot of attention tonight was this one,
with an impressive light display.  I also got a kick out of the "shark boat" which seemed to flank the larger vessel for most of the parade. 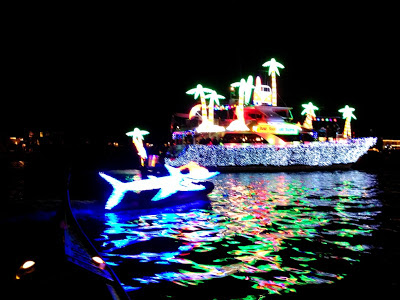 The "shark boat", with its blue light
reflecting off the bow of my gondola.
Many of the parade vessels have sound systems - pumping out all kinds of music and noise (and music masquerading as noise).
Tonight we heard everything from "Silent Night", to "Gangnam Style".
Often times there's someone who feels the need to talk into a microphone, about anythig and everything - whether you like it or not.

In the midst of all the craziness, I found a nice safe spot, secretly placed a message-in-a-bottle in the water and pointed it out to the young lady in the gondola.
She fished out the bottle, read the note, and the gentleman proposed.
What happened next was hilarious.
The guy had an affinity for saying things in French.
When the question was asked, she thought it would be fun to answer in French - she thought he would like it.
But the French equivalent for "of course" is "mais oui".
The parade was noisy, so when she said "mais oui", he thought she said "maybe".
We all had a good laugh...afterward, but at the time, the guy with the sparkly new ring was confused and probably very worried.
The clarified answer, of course, was "yes", and congratulations were proclaimed from dozens of people on boats and bridges.
Posted by Gondola Greg at 11:00 PM