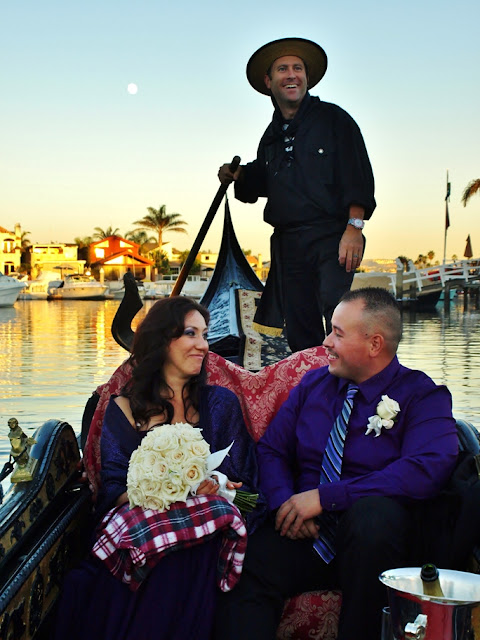 As I have mentioned here a time or two, I have two jobs:
Gondolier
and Wedding Officiant

As such, I regularly see two of the most positive and meaningful events in the lives of many young couples -
I witness marriage proposals,
and I get to preside over wedding ceremonies.

I am blessed to be involved with so many positive events,
and I believe it's made a difference in my marriage.

There's not a lot of overlap.
Most of the couples who get engaged are married by someone else,
and most of the couples I marry have gotten engeged elsewhere.
I almost never see both an engagement and ceremony with the same couple - almost never.
There have been a few exceptions.
After nearly two decades of proposals and wedding ceremonies,
it would be easy to fall into the belief that I've seen everything,
but I know better.

Last month I had the honor of seeing both things take place,
on my gondola...within minutes of each other. 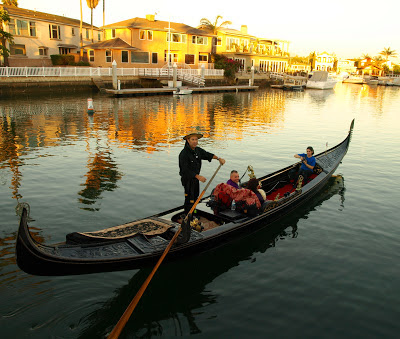 For about a month and a half, my staff and I had been in contact with the gentleman/guy-about-to-propose/groom, so this wasn't a surprise to me...but it was definitely a surprise to his lady.

The whole structure of things these days has changed a bit as far as when and how couples go from "hey, what's your name?" to "will you marry me?".

For many couples the marriage conversation has already been visited by the time he pops the question.  Sometimes it's not a surprise that the question is asked, but when and how.
This was just such a couple, and in the interest of getting prepared for everything, they'd already applied for and received their marriage license.  All she knew was that they had a 90 day window.

Maybe "ambush" isn't the most likely word you'd associate with such a thing, but like a surprise birthday party, that's what it is.
When they climbed aboard my gondola, she had no idea what was in store. 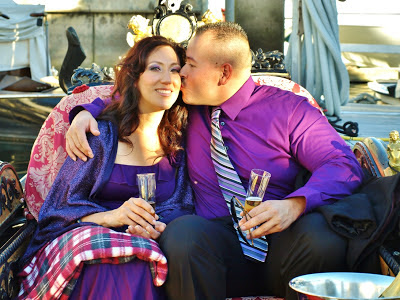 In many ways, this was the perfect ambush.
Perfect in every respect.
We were completely prepared,
we had an "inside man" - the gentleman was in on the whole thing,
necessary paperwork was taken care of,
our "inside man" walked the unsuspecting target into place,
and unlike most ambush situations, the person being surprised was thrilled with both the ambush and after-effects.

He surprised her with the cruise,
surprised her with an unassuming photographer to take a few photos,
and then when she was totally relaxed
(that means she had dropped her guard),
there was something in the water... 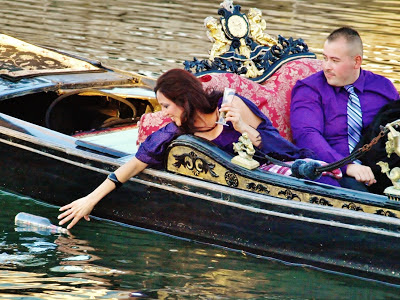 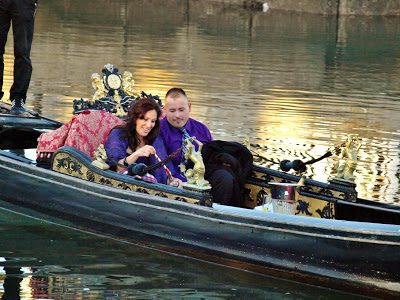 ...sure enough, there's some kind of scroll in there... 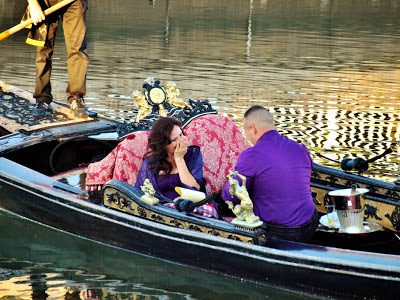 aaand BOOM, the man is on one knee with a sparlking diamond ring. 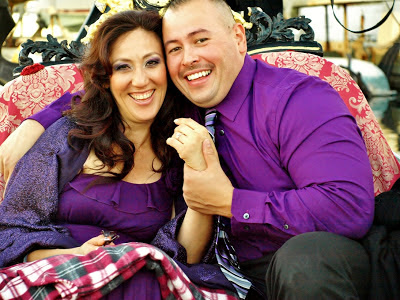 Mmmm, but there was another surprise in store: 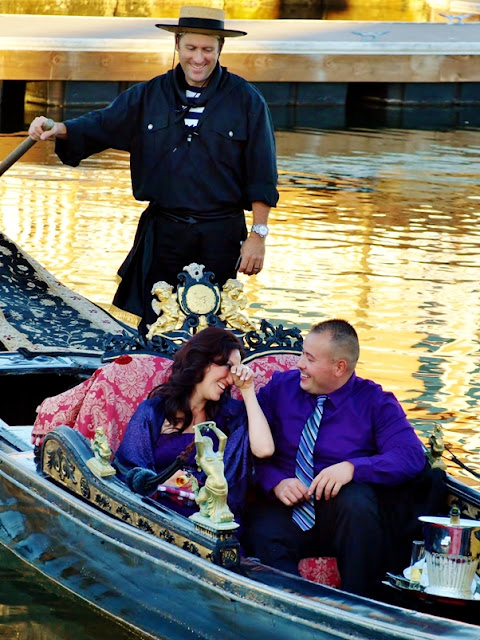 The message, and his actions said "will you marry me?"
After she agreed, he followed up with
"ok then, how about now?" 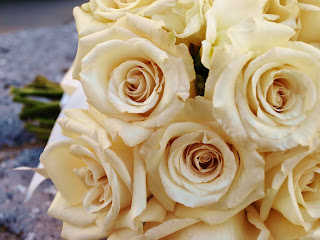 I had a bouquet of white roses hidden below deck in the back,
along with their marriage license,
and a ceremony that the gentleman and I had worked together on ahead of time. 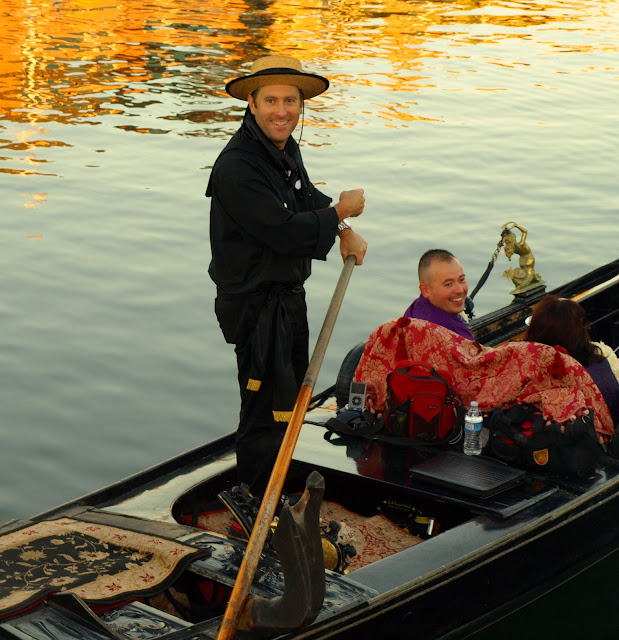 We rowed to spot where I could perform the ceremony,
I pulled out my ceremony book, and these two tied the knot
in a most unique and memorable way. 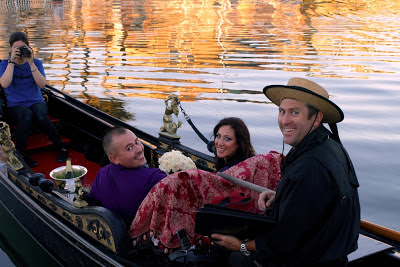 Rowing a little bit here and there to keep the boat on course, 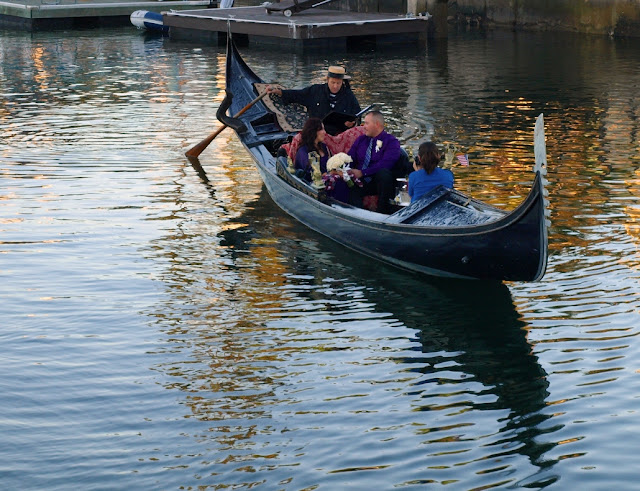 I managed to stay on-script. 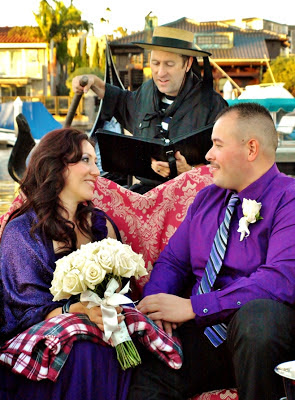 They professed their love for each other,
exchanged their vows,
and then it was time for the kiss. 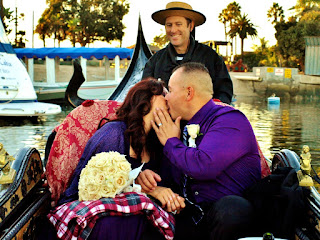 All-in-all, this was one of the coolest weddings I've been fortunate enough to be a part of.

My congratulations go out to the newlyweds,
and my admiration to the guy who was bold enough to pull off
not only a proposal, but a wedding too!