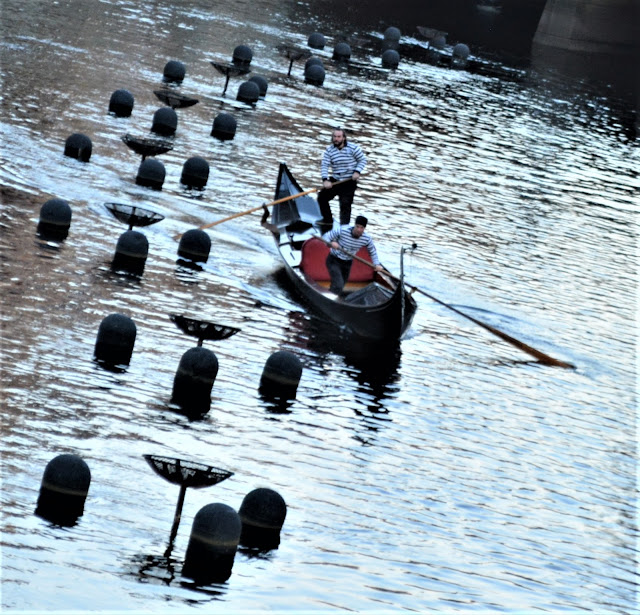 If the sprint events are full-throttle-in-a-straight-line exhibitions of power,
The slalom events are quite the opposite.
In these events it's still a matter of who crosses the line with the fastest time, but there are very few straight lines, and the only full throttle opportunity is after the last turn as you head for the finish line.

The waterway where La Gondola operates in Providence, Rhode Island has a remarkable event known as WaterFire
(you can read more about it in my post "What Is WaterFire?").

The fire part of WaterFire involves several floating firepits,
which just happen to make great slalom markers.
Each firepit - which is called a "Brazier" - is supported by three globe-like floats.

After some discussion with various Providence gondoliers, as well as Marcello (who planned this event), it became clear that it was ok to let the boat touch the floats, but you did NOT want to "spear a brazier" - which means getting the prow of the gondola between the firepit and one of it's floats.

In the tandem variation of this event, the rowers were required to turn at every other brazier.  The solo runs were even more daunting - with the competitors turning at each and every brazier.

A local gondolier who'd spent some time practicing on this course told me that the key to success was to try and create a path as "straight as possible".  That is to say - the less serpentine the better.

Seemed like a logical approach.
Seemed easy enough, too.

As you can see in the following photos and videos,
getting a 36 foot long gondola to turn back and forth as quickly as possible, well...let's just say that it results in a lot of tail wagging.

Oh, there's one other thing:
while you try to get through the course, you've got to keep from getting tripped up by the floats and braziers - which always seem to get in the way of where you want your oar to go.
I heard some guys complaining about how they got their oar wedged in, or bumped it against something as they were trying to bring it forward to get their next stroke in.

Here are some of the tandem teams making their way between the braziers. 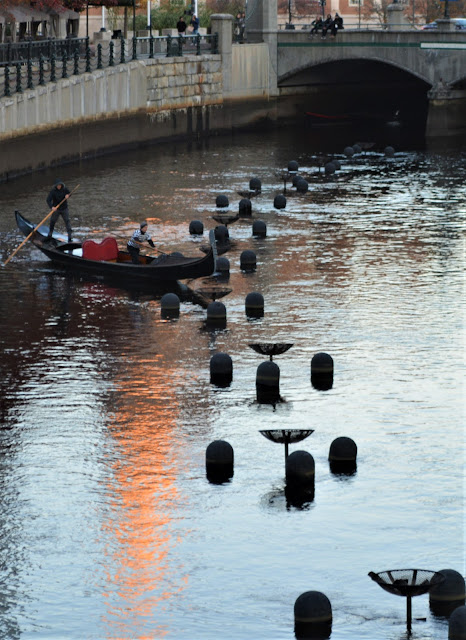 John and Michael from Minnesota were the first team through the course. 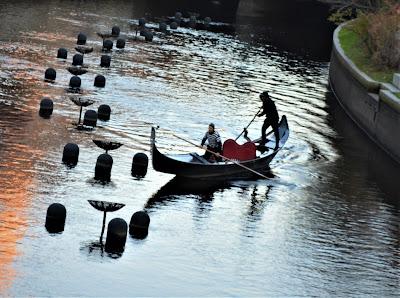 Powering through a turn. 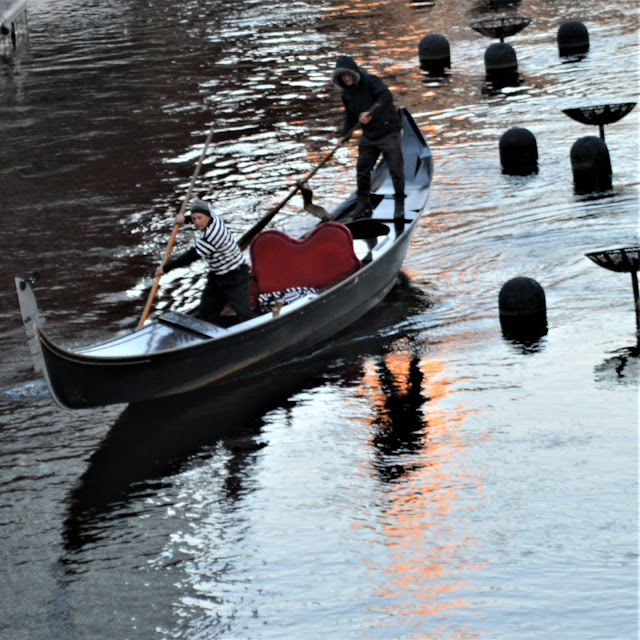 As an experienced canoe guide, John Kerschbaum has been known to employ some clever moves that aren't often seen on a gondola.
here we see him prying off the the starboard side of the bow
to bring the boat into a quick turn.

THE SILVERMEN
Local boys Mariano and Ivano were the next pair to navigate the course.
They showed a clear understanding of how this unique race is to be done.
I was told that these two would be contenders in this event,
and not surprisingly, they took the silver medal with this run.

Keeping the turn arc as close as possible. 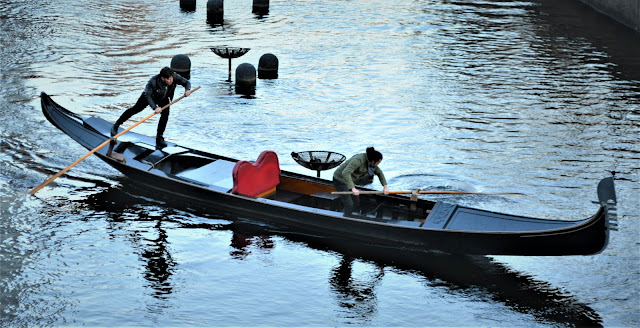 Executing power strokes whenever possible, but not flying off course.

Now watch the onboard GoPro footage of their run:
Beyond just watching the methods and techniques, I'm intrigued by the communication that takes place between two guys on a boat
as they go through a course.
In the case of these two, they clearly speak the same language
as they refer to different moves.

THE BRONZE BOYS
Having spent exactly zero minutes practicing for this event,
I was really impressed with Newport gondoliers Parker Harrison
and Michael Angelo Ruffino.  They are a remarkable tandem team,
as is evidenced by their 3rd place finish in this unrehearsed event. 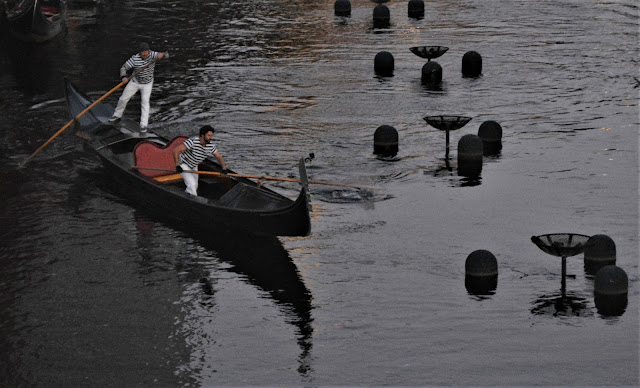 Consistency served them well in this run. 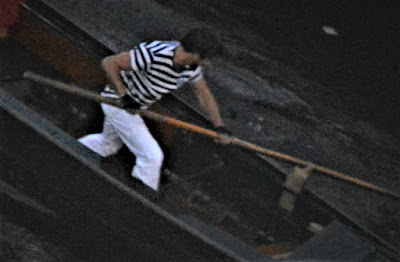 That, and carefully applied power.

Now here's the onboard GoPro footage of their run:
It's evident at the very first turn that Ruffino knows to use a tirare-style drag, and they definitely work well together.

To do your best, you need to push things right up to the edge.
Almost right up to loss-of-control.
at 1:13 we see an impact, Parker falls forward,
but like the good surfer that he is - he's back on deck and in control in record time.  In fact the boat never even slows down, and they're able to stay on track for a fast finish that's good enough for a bronze medal. 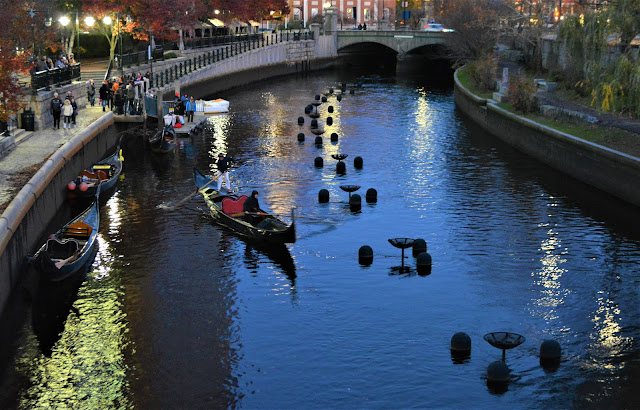 Simon and Jonah of Newport Beach experienced an error at the beginning of their run, but they refused to quit. They got lots of applause for their dedication and had a good solid run after that.

EAST COAST/WEST COAST
Tim "Bepi" Reinard of Sunset Gondola in Huntington Harbour, CA
and Greg "Rafaello" Coffey of Providence teamed up for an
East Coast/West Coast run.
They were fun to watch and turned in a solid time. 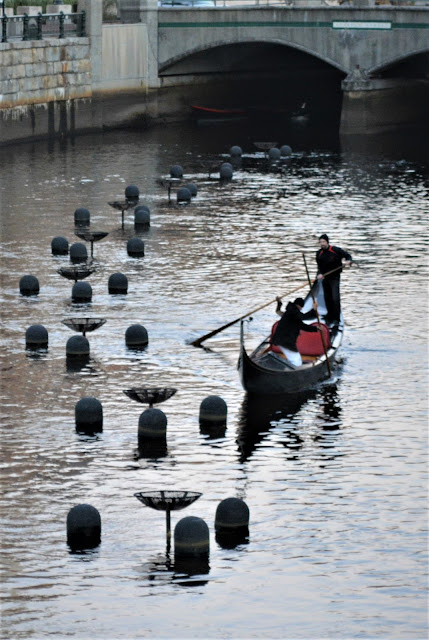 Tim working a mid-ship dar-zo pry to keep the boat on course. 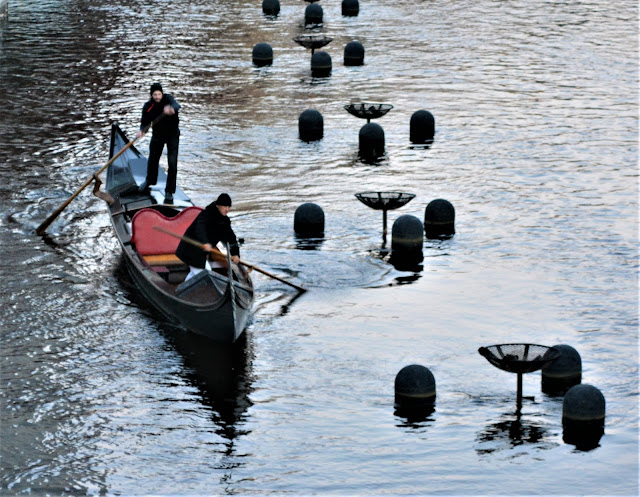 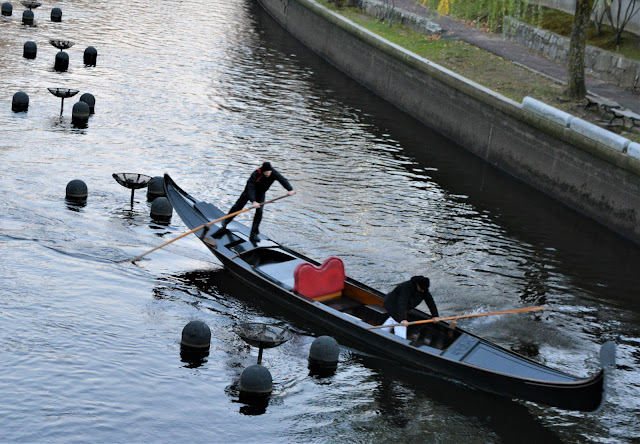 Now watch and listen to the onboard GoPro video of their run:
Watching these two communicate is remarkable.
One guy lives there, and knows the course.
The other guy is new to it all, but he knows his way around a gondola.
It's almost like the guy on the back is giving a tutorial of the course to the guy on the front.
And yet Bepi is quick on the draw.
I'm a huge fan of the draw technique he uses at 0:43.
And he doesn't just draw a little - he takes it to the floor.
The midship pry (dar-zo mezza barca) at 1:17 is also powerful.
Things get a little crazy at 1:35 - in this entire competition,
Bepi is the only one to "make a basket".
A quick recovery and a hard push to finish.
Bravo, boys!

FIRST PLACE
The fastest time (by more than 12 seconds)
was the team of Marcello and Allesandro.
Two brothers who have won and placed in many races over the years
(you can read more about them in my post
"Tandem Distance - the Brothers Haynes")

With a combination of experience, power, and expert technique,
these two brothers showed true mastery of the tandem slalom. 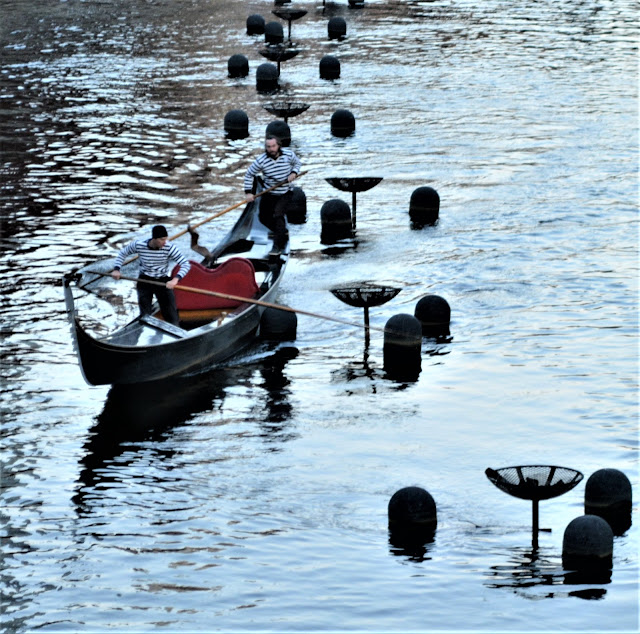 The boat never slowed down, never wavered from a tight pattern. 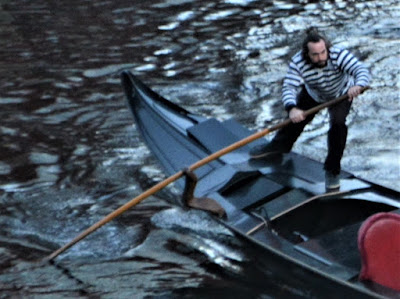 Power in the back. 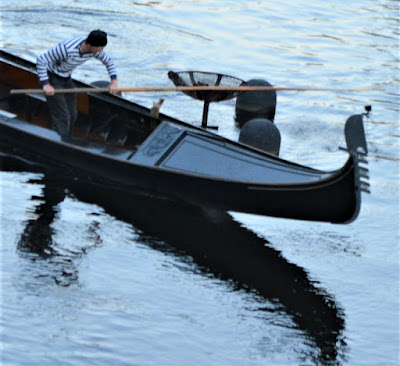 Reaching over a brazier. 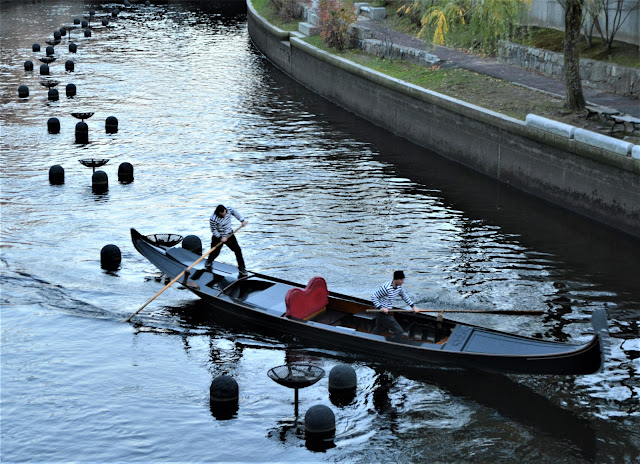 Speeding to the finish line.

Now watch the onboard GoPro footage of their run:
So cool.
And by that I mean these two go about it in a calm and controlled manner.  Marcello gives direction in an understated way.
In fact the only time he raises his voice is to be heard over the cheering.
One thing I noticed is that the winning team employed almost everything in subtle, carefully measured amounts...
which is why they made it look so easy.

I'd like to give a big thank you to Simon Atkins for all the diligent hard work getting GoPro devices in place, recording, and with regular battery changes.


Here are the top four finishers in the event: 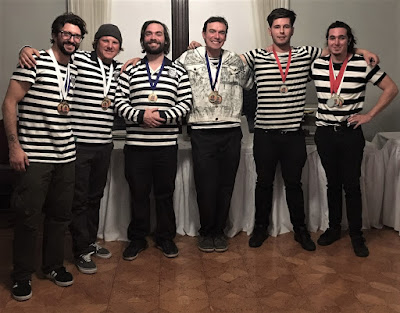 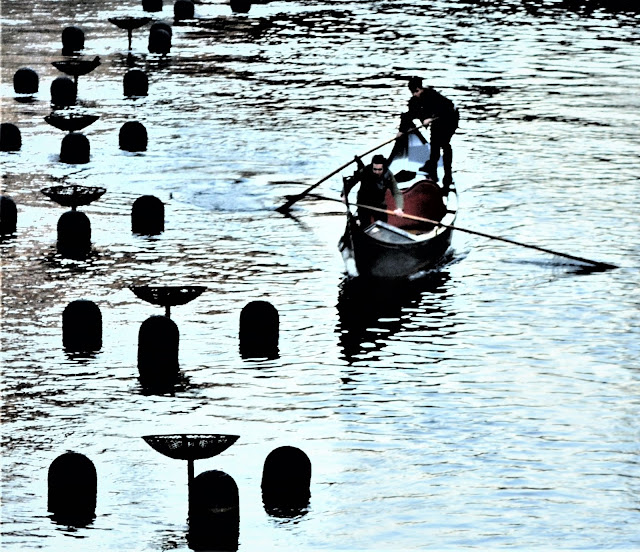 Mariano and Ivano
Posted by Gondola Greg at 2:14 AM

Have you ever seen or tried a gondola out in waves?
I know it is not designed to surf but just curious.
Jack