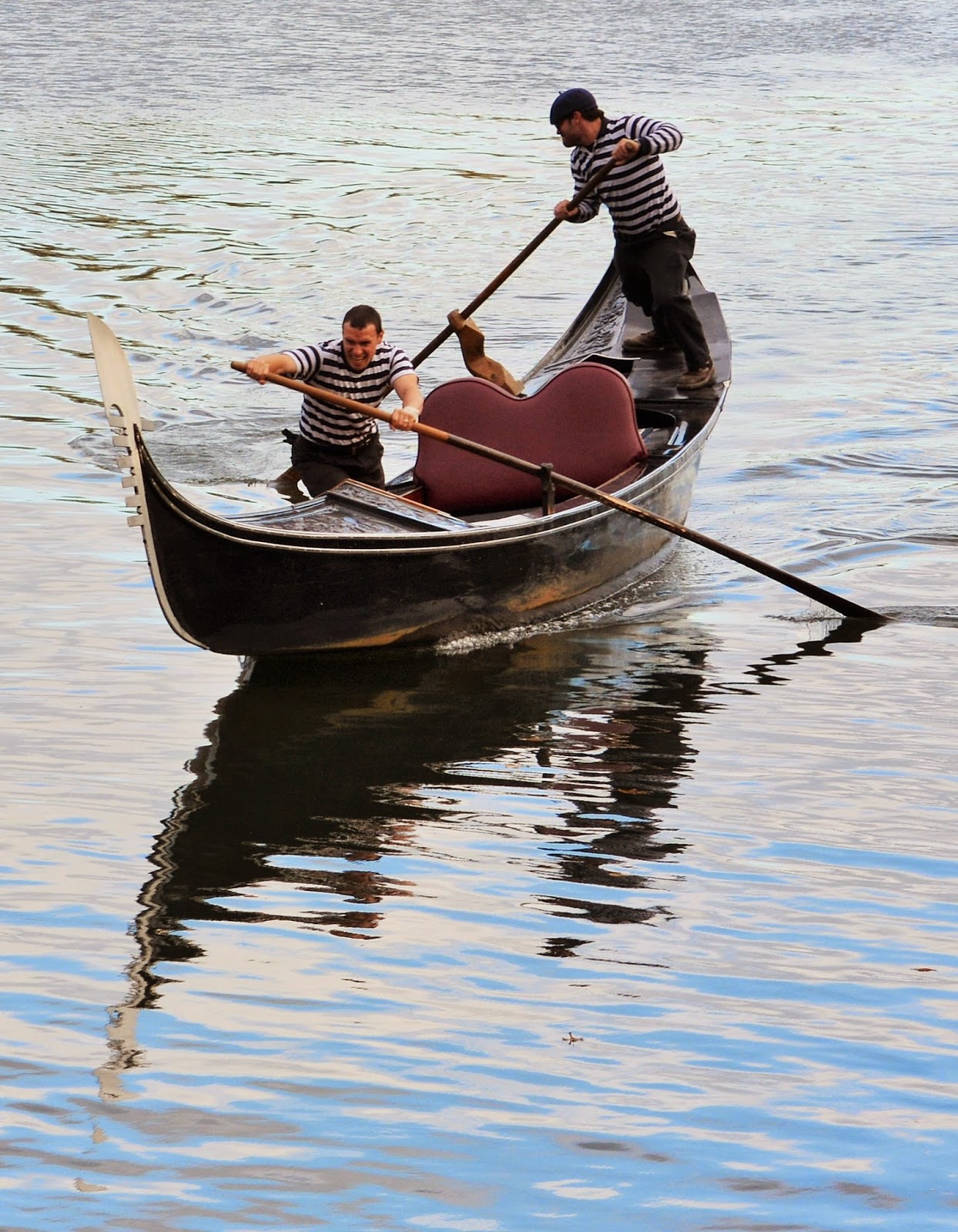 On October 26th, on a cool and windy afternoon in Providence, Rhode Island, the participants in the 2014 U.S. Gondola Nationals raced in the final racing event of the competition - the Tandem Distance race.

THE COURSE
The race was supposed to follow the same route that had been used in the Solo Distance race, but the winds had increased.  To avoid having gondolas bouncing and grinding against walls and bridges in those tight quarters,
it was decided that the two-man distance event would remain in the lower part of the channel.

This was a timetrial event - so rowers had nobody to measure their speed against.
The distance of the race was just over two miles.
Like the sprint events, the timekeeper started the clock as the ferro of the gondola emerged from the Crawford Street bridge.
Two-man teams rowed down to the foundations of the old Route 195 bridge, with the wind at their backs, turning around or beyond one of the remaining foundations.  Next it was a fight against the wind back up to the Crawford Street bridge, passing under to turn and re-emerge to do the same down-and-back a second time. 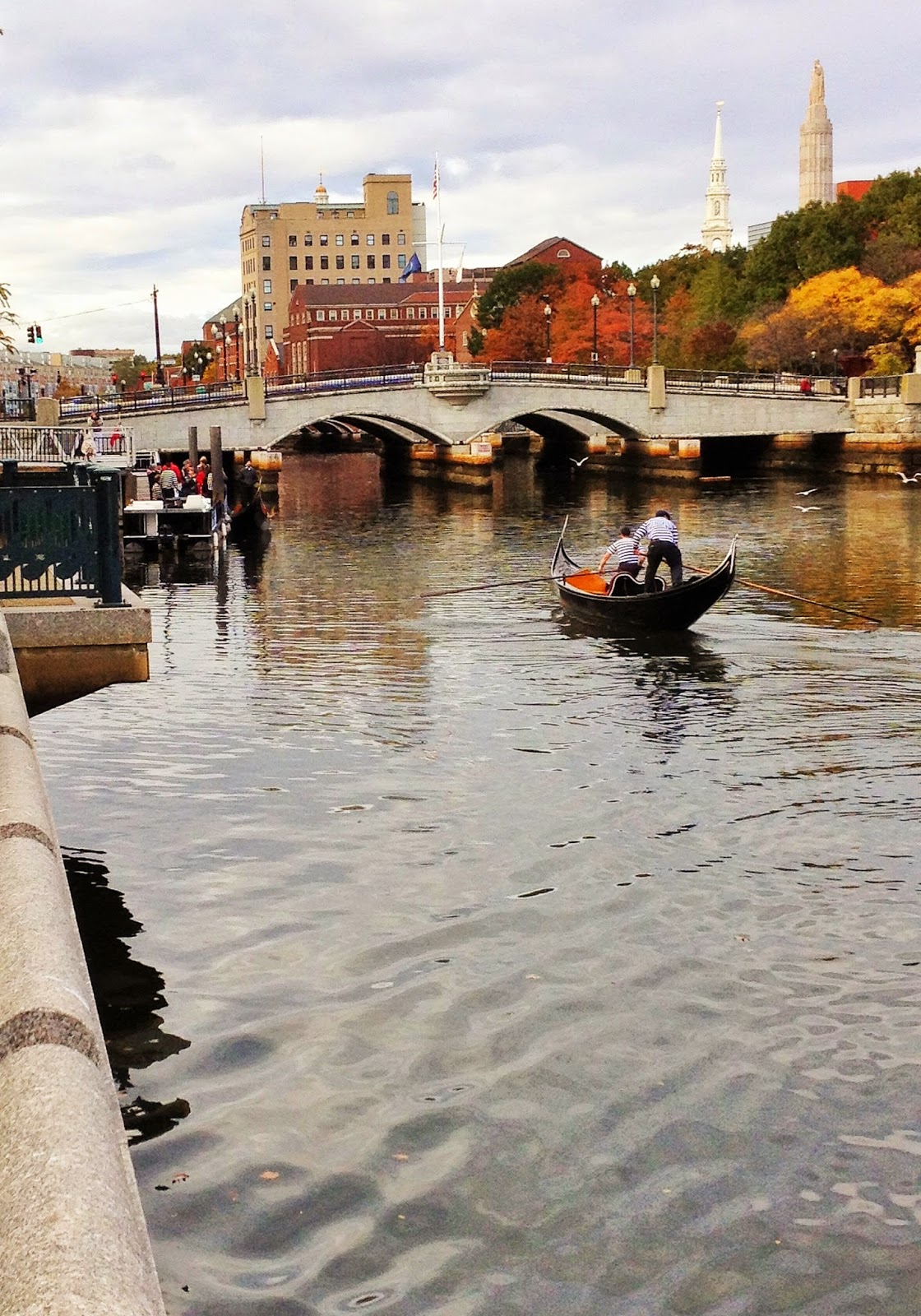 Gondola racing in New England in the Fall.

STRATEGY
It became obvious early on that the biggest enemy to gondoliers on this course was the headwind we fought against while returning from the old Route 195 foundations.  Many teams sought refuge by hugging the wall to their left, as there was sometimes a wind-shadow there. Finding a good stroke synchronization and making the best and tightest turns were also important.

POLE VAULTING
As this was a tandem race, finding the right partner to row with was of great importance.
While describing the camaraderie between gondoliers, I've often told people "nobody understands you, and that weird thing you do,
like someone who does that weird thing too."
People who aren't gondoliers just don't understand sometimes.
I suppose it might be comparable to pole vaulting.
Sure, we've all seen it done, but until you've actually experienced it;
until you've run, planted, and then been flung into the sky by a 15 foot pole, you'll never be able to truly understand it from a vaulter's perspective.

As a gondolier, nobody understands you as well as another gondolier...
unless, of course, you have a brother who is a gondolier.
That guy gets you.
Want to find someone who will mesh well in a tandem row?
He's the guy.

HAYNES x2
Their names are Matthew and Alexander Haynes.
On the gondola they are known as "Marcello" and Alessandro".
They were born a couple of years apart - Matt's 35, Alex is 33.
Both played a lot of soccer growing up, then later on Alex was a wrestler and Matt got into traditional rowing in college
(yeah, the kind where you sit on your butt and pull).

A year later Matt found an amazing summer job and became a gondolier at La Gondola in Providence, Rhode Island - he ended up buying the business years later from the previous owner and, like many of us gondola operators, has truly found his calling.

Two years ago, Matt dreamed up and brought to life the very first gondola competition in North America - the GondOlympics.

This year Matt and his brother Alex competed against each other in other races, and they both did well.  Their Tandem Sprint run was excellent too, but when they got on the boat together for a distance race, they were unbeatable. They grew up in the same house, and sure, there were sibling rivalries, but Matt explained to me that because they were two years apart, they were never able to compete in the same league, much less on the same team.
Matt said:
"I was thrilled to get the opportunity to race with Alex.


We were never able to just be athletic together and see how far the two of us could challenge each other."

"When I got there I wasn’t sure what we were gonna do,

except go out there and row." 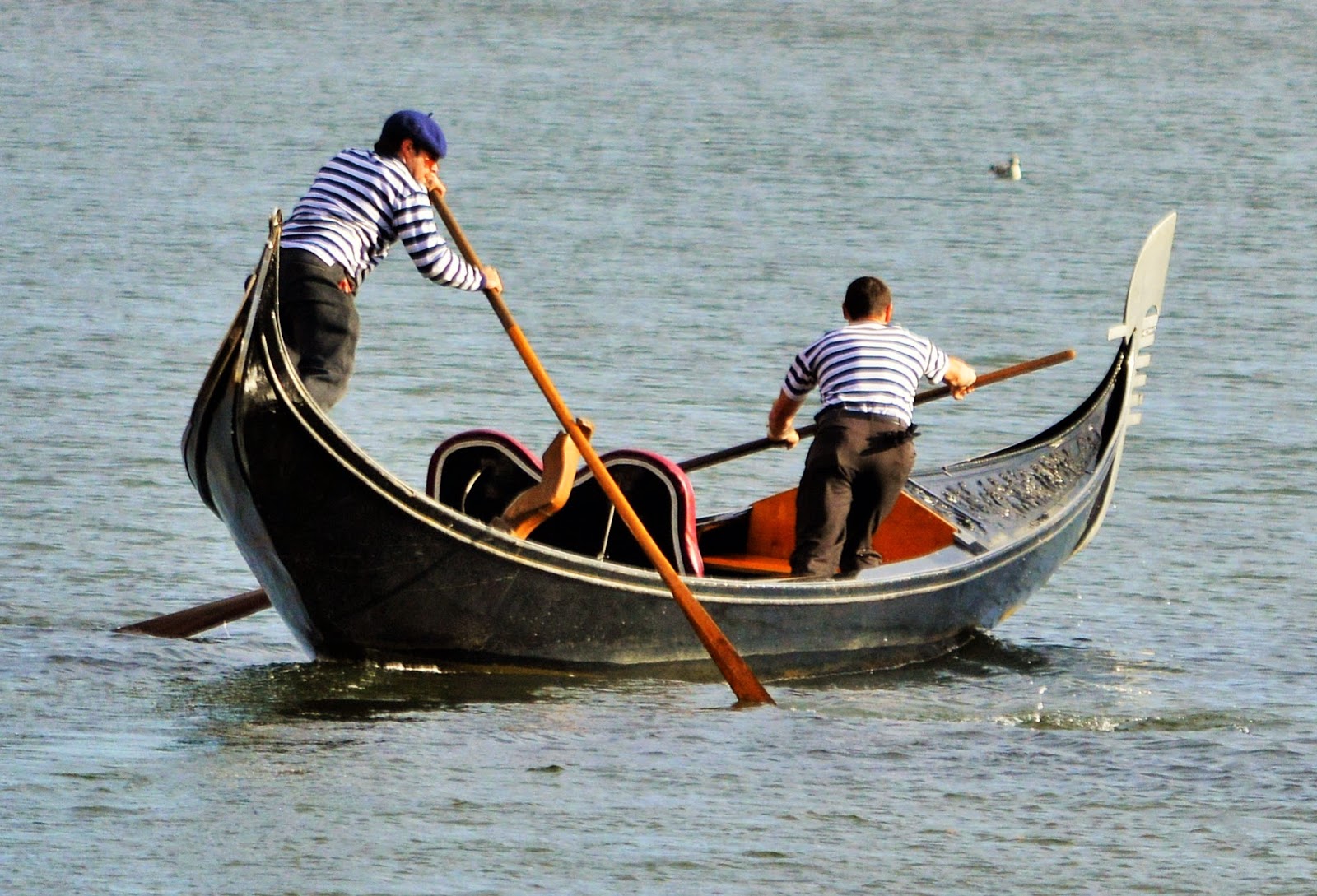 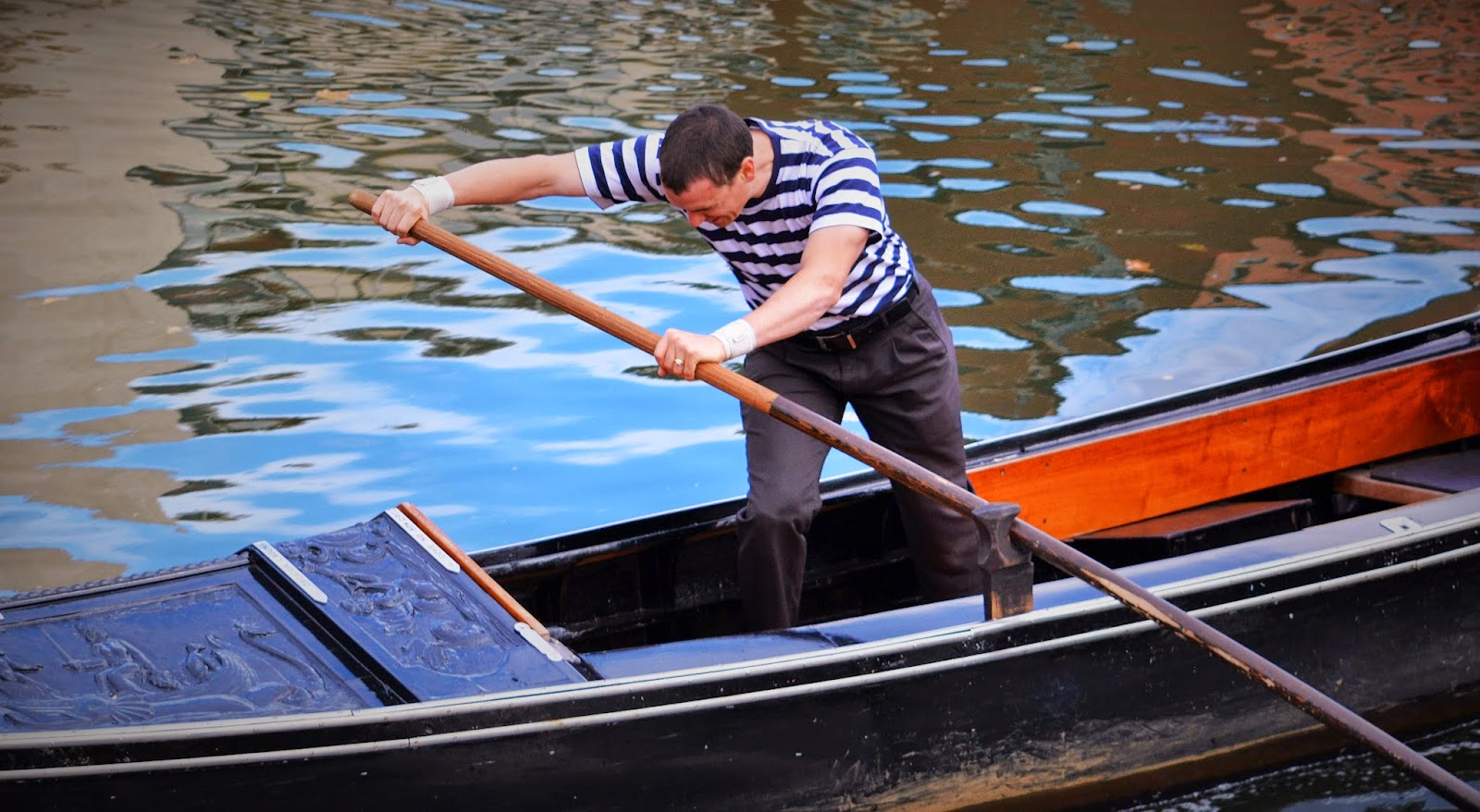 "In addition to that, there’s the other crew element – we were going to row it as a focused race, setting up the turns together"
From Formula 1 to gondolas, races are won or lost based on how well you did in the turns.
Alex told me:
"The turns were what we really focused on.
The turns were what I really wanted to improve on from the first GondOlympics.
We were inches from the objects we were turning around."


The "top turn" under the Crawford Street" bridge.

4. "Tens"
Traditional rowing may seem opposite from Venetian rowing, but as we can see, there are some things that translate well.  And then there's a little focusing trick Matt took with him when he stepped out of his college boat: "power tens".
As Matt explained to me: "where you're pushing as hard as you can,
but then take it to another level - two strokes to warm up,
and then counting to ten with power strokes."
Matt served as a sort of coxswain up front. Alex said:
"He kept counting to ten.  That little focus method made the difference".
During their second approach to the dock, I walked down to the wall that they were passing.
I snapped this image with my phone.
The guys were so close I could hear them breath. 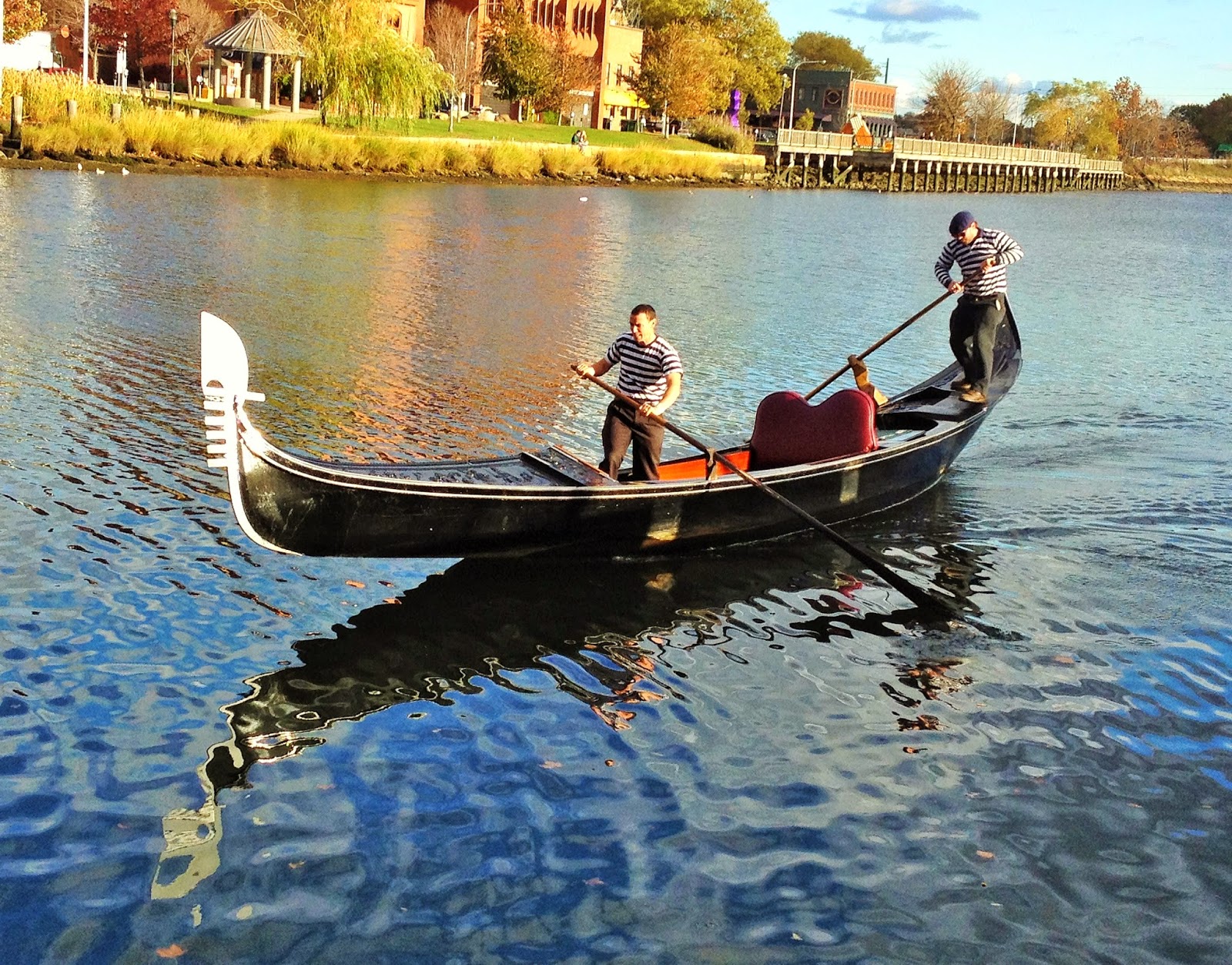 I heard them counting to ten, in between counts their breathing told me that they were rowing at maximum capacity.
I stood there in my orange jacket and they didn't even notice me.
Obviously the focus trick worked.
Looking back, Matt told me:
"I remember very little of the race - except that we were racing."

5. Poseidon
Matt has a nickname among his fellow gondoliers in Providence.
Two years ago, when everyone was competing in the GondOlympics,
the winds were a real challenge.  When it was time for Matt to take his turn, he stepped on the gondola, rowed out to the starting line, and the winds and the water all mysteriously went calm - allowing him to row with an extra competitive edge.
For that reason, Matt is also known as "Poseidon's Illegitimate Son".

I can't speak to his true lineage, and unfortunately I wasn't able to be there to witness his run two years ago.

There are two statements I can make though:
first, it did seem less windy during Matt and Alex's run this year.
Secondly, it was windy as HECK during my run with John Kerschbaum.
I have no basis for comparison here, because I wasn't on the boat during other runs, but based on the treatment John and I received from the wind,
I had to wonder if Poseidon or some other force associated with wind...hated us that day.

6. Frustration
As it was for many competitors, I think the guys on this boat were a little frustrated after watching a certain San Diego rower take first place in everything...including the slalom.
This was the last race, the last chance to blow it all out, empty the gas tank and leave it all out there on the water.
Alex tells me that Matt said:
“all I want you to do is stand on the back and push”.

This was it, the race for all the marbles.
All the hopes and pains, all the inspiration, frustration,
dedication and even retaliation went into one race.

Two brothers on one boat,
rowing their hardest while counting to ten - again and again.

Throughout the race, they had no idea how they were doing - no idea if their run was even worthy of the top three.  It was a true case of "be the best you can be".

They pushed harder than either of them thought they could.
Alex said:
"We left it all out on the water.
I couldn't stand up after that race.
My ribs were sore for three days afterwards." 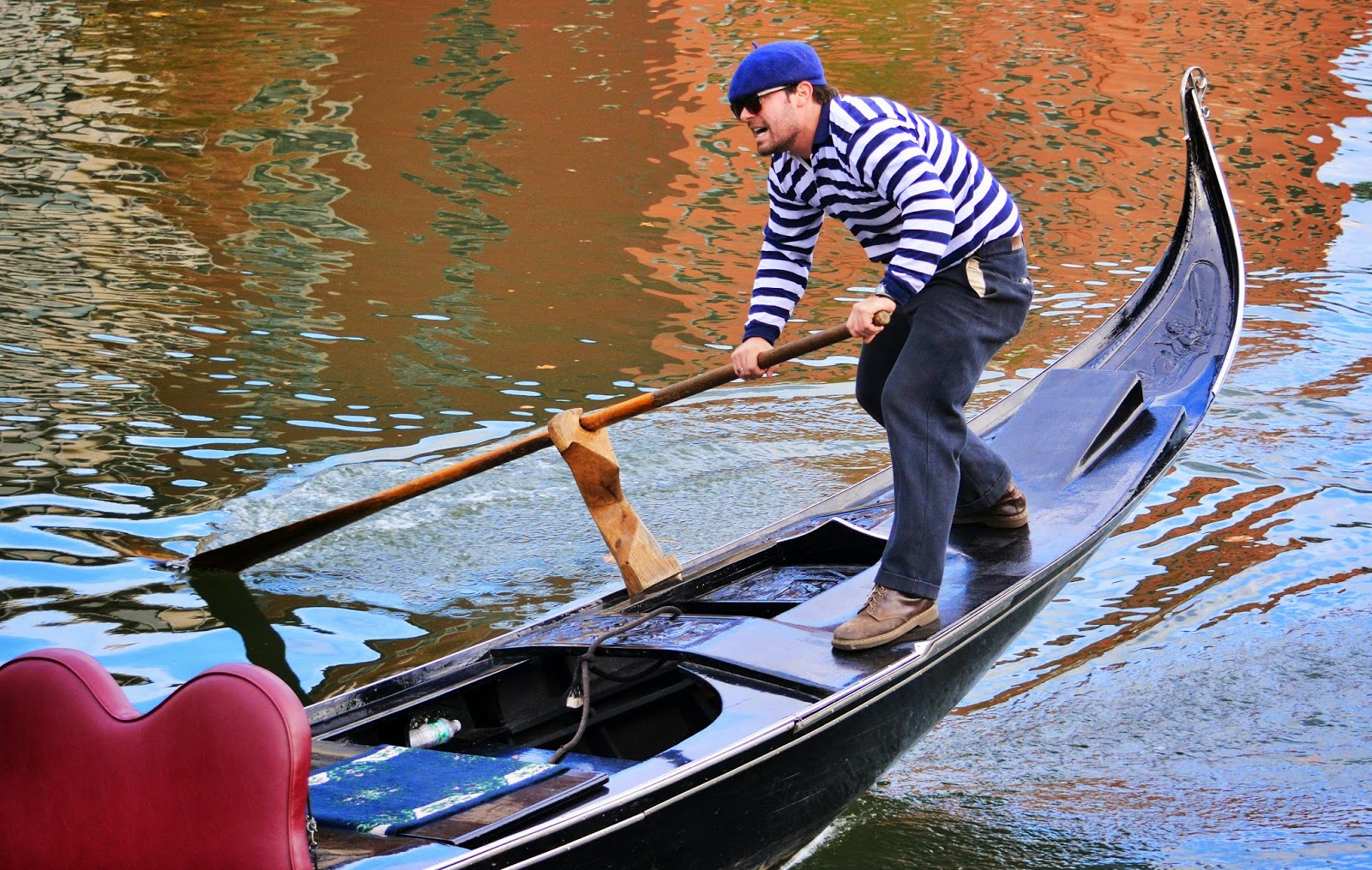 It had been a good ten years since Matt had competed in traditional rowing, and yet some of his greatest advantages were borne out of those days of rowing crew in college.
The sense of accomplishment could be seen in their faces as they finished the battle - against the wind, the water, the clock, and themselves.
They had given it their absolute all.  Regardless of how the times stacked up, we all knew how hard they'd rowed, and respect was in the air. 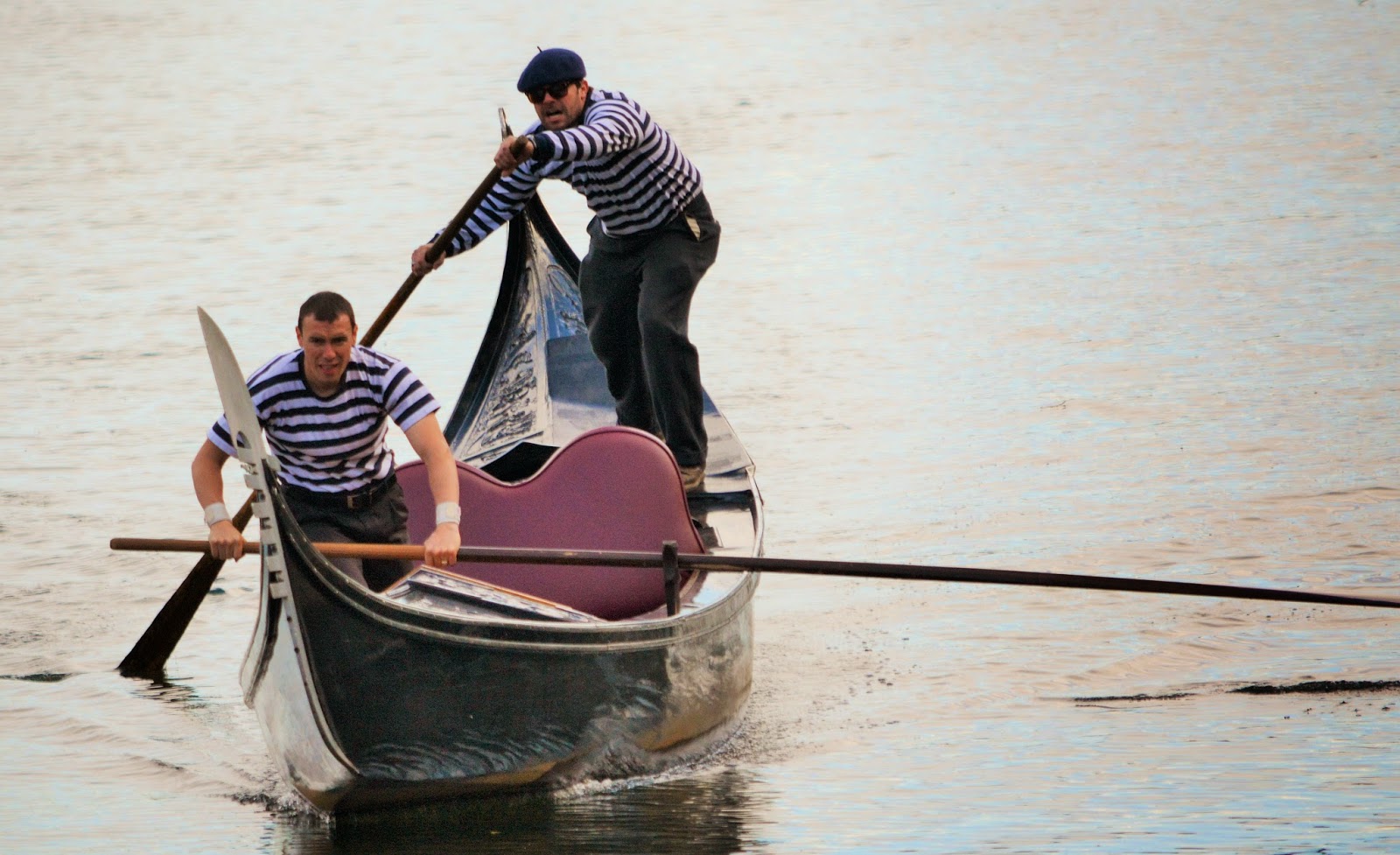 As it ended up, the two sons of Jackie and Ed Haynes finished in first place, and wore gold medals that night.

My sincerest congratulations to Matt and Alex; for rowing an excellent race,
and showing everyone how it's done.


The final push towards the finish line.