If you were looking for a clever nickname for the solo or single distance race this year, I might suggest the "Tour de Providence" - because it included several of the various conditions that Providence gondoliers face while rowing. 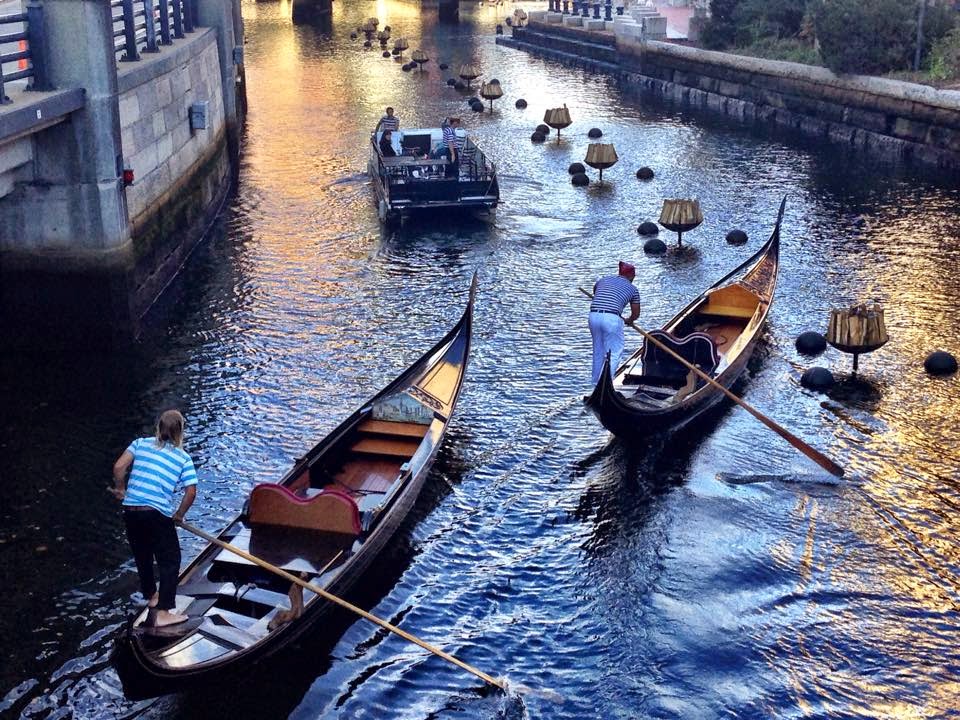 photo by Cole Hanson
THE COURSE
The course began at the wide and windy open channel just above the Point Street bridge.  The starting line was marked by the still-existing foundations for the old Route 195 bridge, which was torn down - leaving five "walls" that sit in the channel like slots for a horserace.
Rowers pushed their way upriver through the wind and current.


Upon passing under the Crawford Street bridge, they entered tighter quarters as the course wound them further up the waterway.
With each bridge, the river became narrower until they reached the area where the slalom race was held.
Gondoliers turned at the same buoy as they did in the slalom,
and then headed back down the way they came. 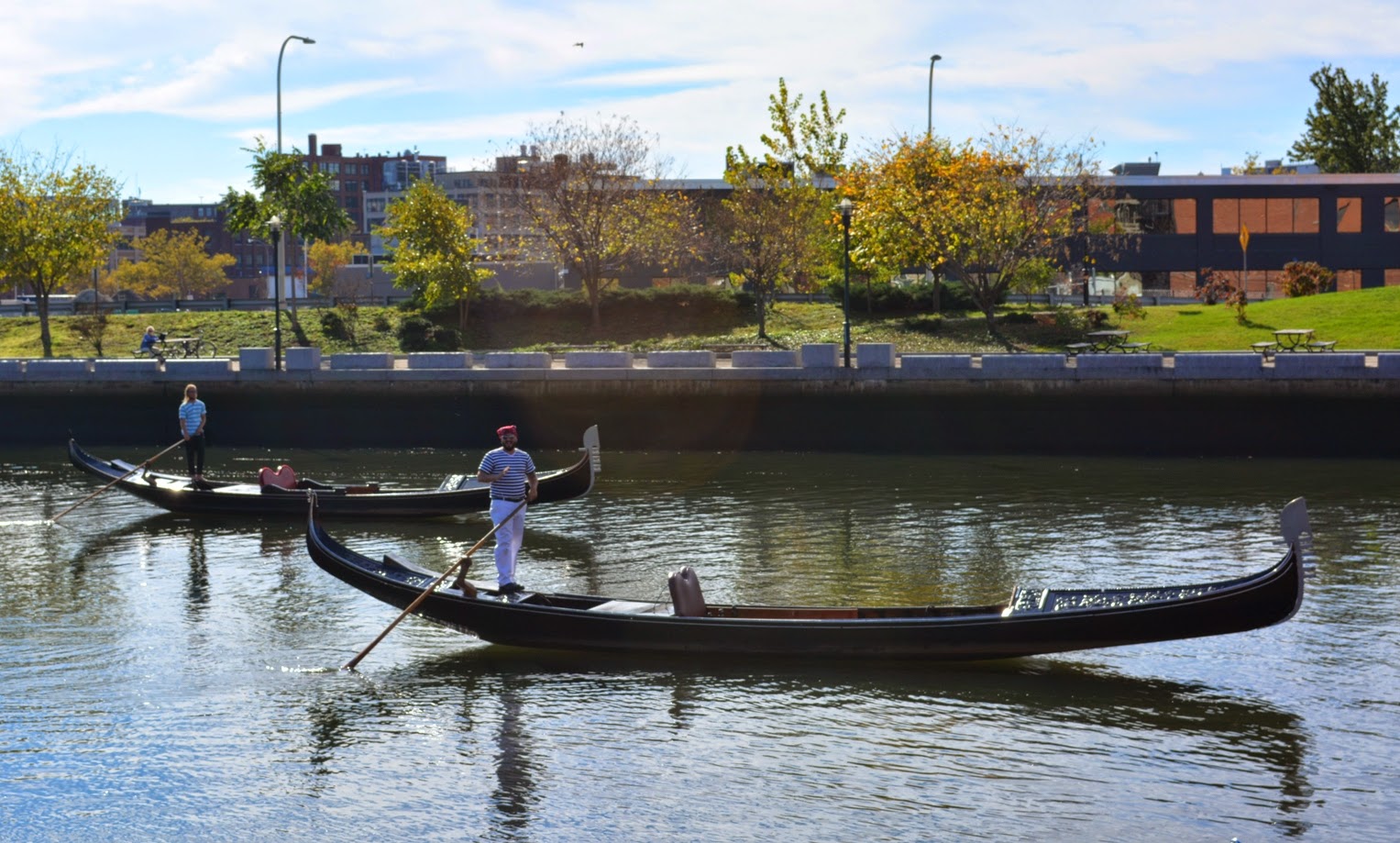 SIDE-BY-SIDE
Perhaps another suitable name would be the
"Woonasquatucket Head-to-Head Challenge" - because they did all of this...rowing side-by-side (and yes, I do realize that's a funny name,
but I'll bet the .com for it is available).

The race was conducted in two-man heats. In some cases one rower gained a lead over the other and it wasn't as much of a drag race, but in other cases the two gondoliers were neck-and-neck for most of the race.

SNAPPER AND RICHIE
Such was the case with the race between Eric Bender (also known as "Enrico" or "The Snapper") from The Gondola Company in Coronado, CA.
and Richard Corbaley ("Ricardo") from Sunset Gondola in Huntington Harbour, CA.
Last year these two crossed the line in 2nd and 3rd place - with Bender coming in 2nd and Corbaley in 3rd.
When they rowed out to the old bridge foundations this year,
everyone expected a real race, and they got one. 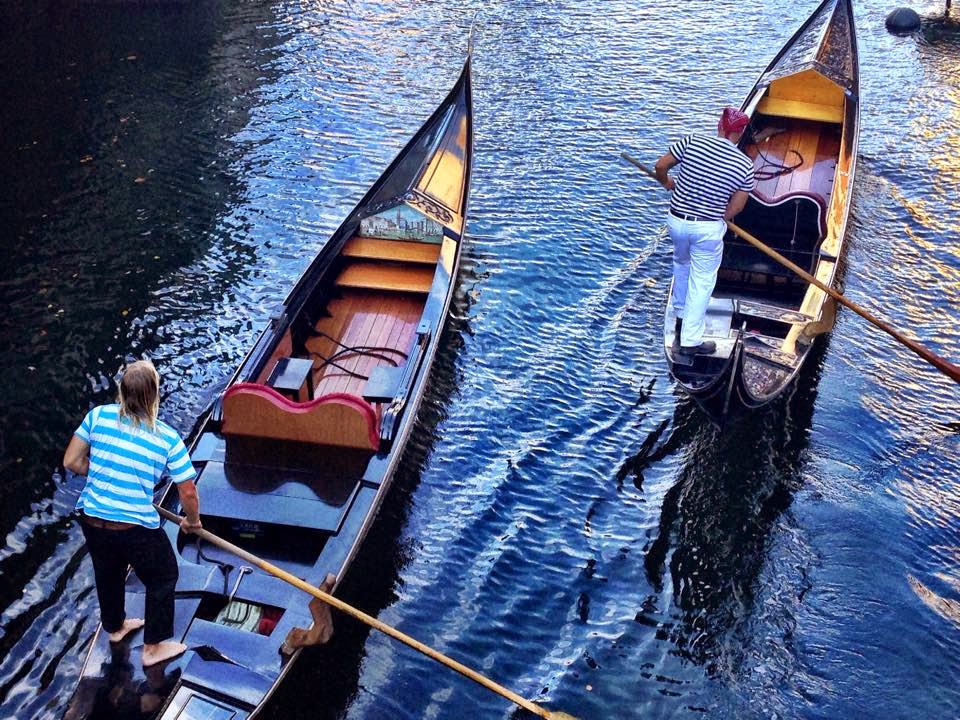 They come from different servizios, and yet because of all the social interaction on the West Coast (thanks Tim),
they know each other and are friends.

Everyone at the U.S. Gondola Nationals is competitive and yet professional.
In fact, when I talked to Richie, one of the very first things he said about that race was "It was a pleasure to race against Eric".
He went on to say "Last year I didn’t get much of a chance to get to know him, but this year we all got to spend time in camaraderie."

THE FIRST HALF
I spoke with Eric about the course. He said:
"It surprised me how heavy the river current was, and it was really shallow right at the starting place – we both had to choke up a lot to row – I was worried about getting the boat moving there."
San Diego gondoliers are no stranger to wind, but fighting against an outgoing current as well was a new challenge for Eric.

"Richie started to get ahead 24 strokes into it – I decided to play it smart and back off a bit."
Not long after that the two fell into a rhythm, rowing next to each other.

I asked Richie what the race was like: "Eric and I were in constant communication, giving each other space, shooting the breeze".
They worked together as they navigated up towards the turning point.
The two boats were side-by-side for most of that time.

Things changed towards the top of the course:
"A boat stalled in front of me and that was when Eric got the lead,
but by the time we turned the corner, I was right on his stern."
Eric had moved over so Richie could move past the stalled boat. If not for that last-minute adjustment, we might have seen a "do-over" of the race.

After the turn, Eric began to pick up the pace, and in a short time it became a no-holds-barred pursuit. 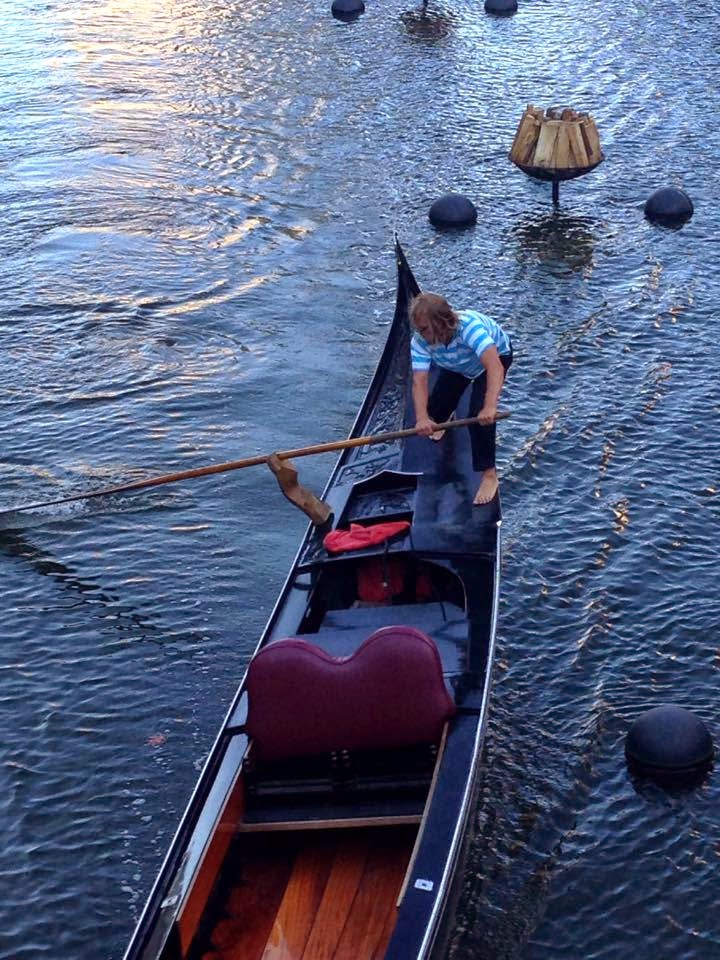 THE SECOND HALF
With the wind at his back, and current moving downstream as well,
The Snapper shifted into high gear.
He told me "I felt like a bullet from that point on."

Fellow Coronado rower Cole Hanson was following the race on foot,
calling down from various bridges like a 3rd base coach in baseball.

Eric put some water between him and his fellow racer,
but Corbaley managed to tighten up that margin.
When you're in the "high gears" of rowing, it's not easy or practical to turn your head and look behind you.
Eric said:  I didn’t look back for much of the return row, but I could hear him behind me - the sound of the water off his bow was what kept me psyched up.

Wind became a factor in the last stretch.


When all the heats were finished,
Eric and Richie had secured first and second place. 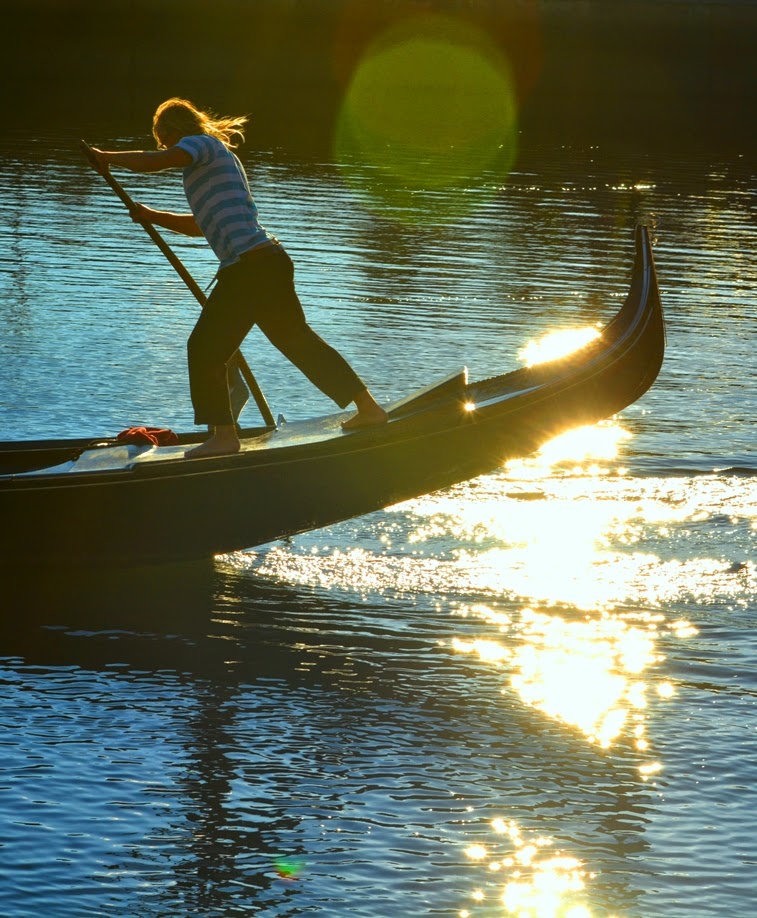 RUNNING FROM THE BEAR
Both men said that they'd enjoyed racing against each other, and both felt that having such an opponent pushed them to row harder than they might have in a simple race against the clock.
Richie said I couldn’t have had a better person to race against.
Eric echoed that: I enjoyed racing against him,
and went on to say that "there's a difference between when you’re running through the woods vs. when there’s a bear behind you!"

We sure saw that in the heat between brothers Matthew and Alex Haynes (a.k.a. "Marcello" and "Alessandro").
If there was any history of sibling rivalry between them,
it certainly served them well in their race against each other.
They crossed the line in third and fourth place.


In the Tandem Distance race last year, John Kerschbaum and I experienced first-hand what it was like to have fierce competitors push us to do better.
In our heat we had a tooth-and-nail fight to the finish with Mike Ruffino and Parker Harrison of The Gondola Company of Newport.
Without their aggressive competition, I'm sure John and I would not have finished with the time we did.
(Read more about this race in my post "The Surprise Boys")

YOUR TOUGHEST OPPONENT
Of course there's the competitor next to you, and then there's the one inside you, who doesn't stop talking, even after the race.
Looking back, Richie said:

I learned a lot about myself on that row.
I will forever be my harshest critic, and no matter what,
I will always be racing against myself.
Wise words that we can all identify with. 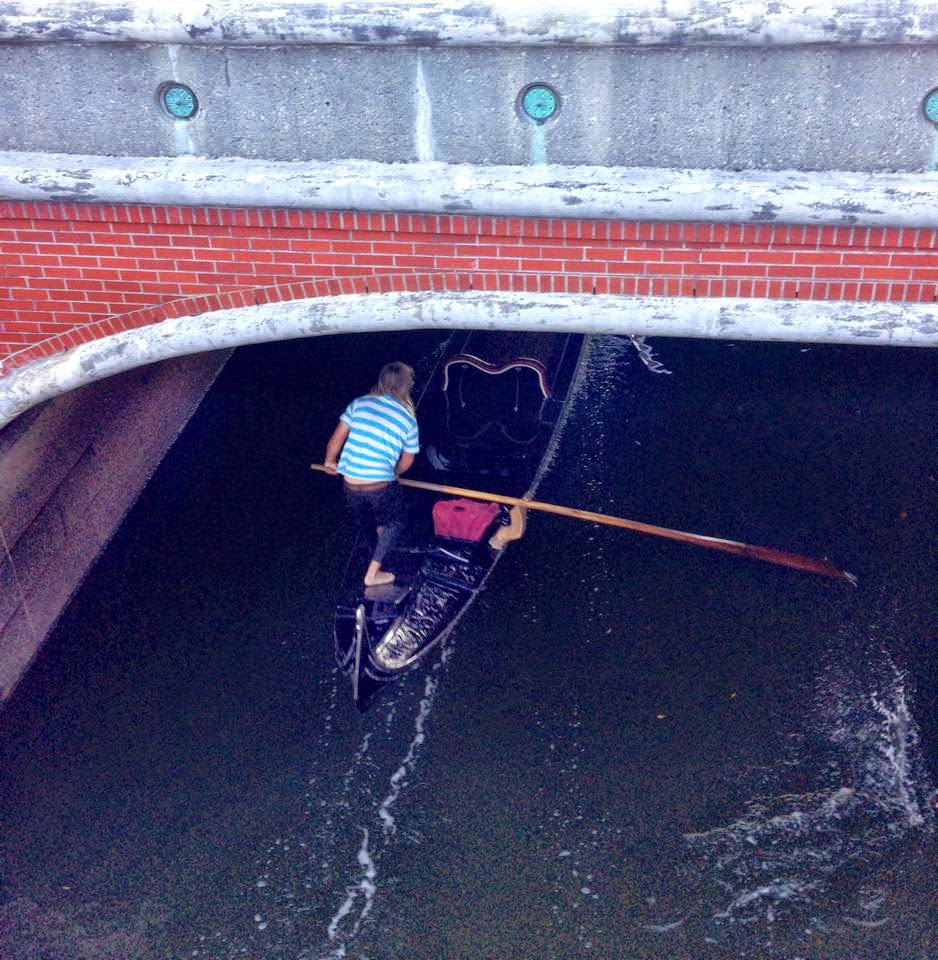