My friend Tim Jones has contributed many great photos to the Gondola Blog.
He also had the opportunity to row in Venice on board one of the Row Venice boats.
Here's his story: 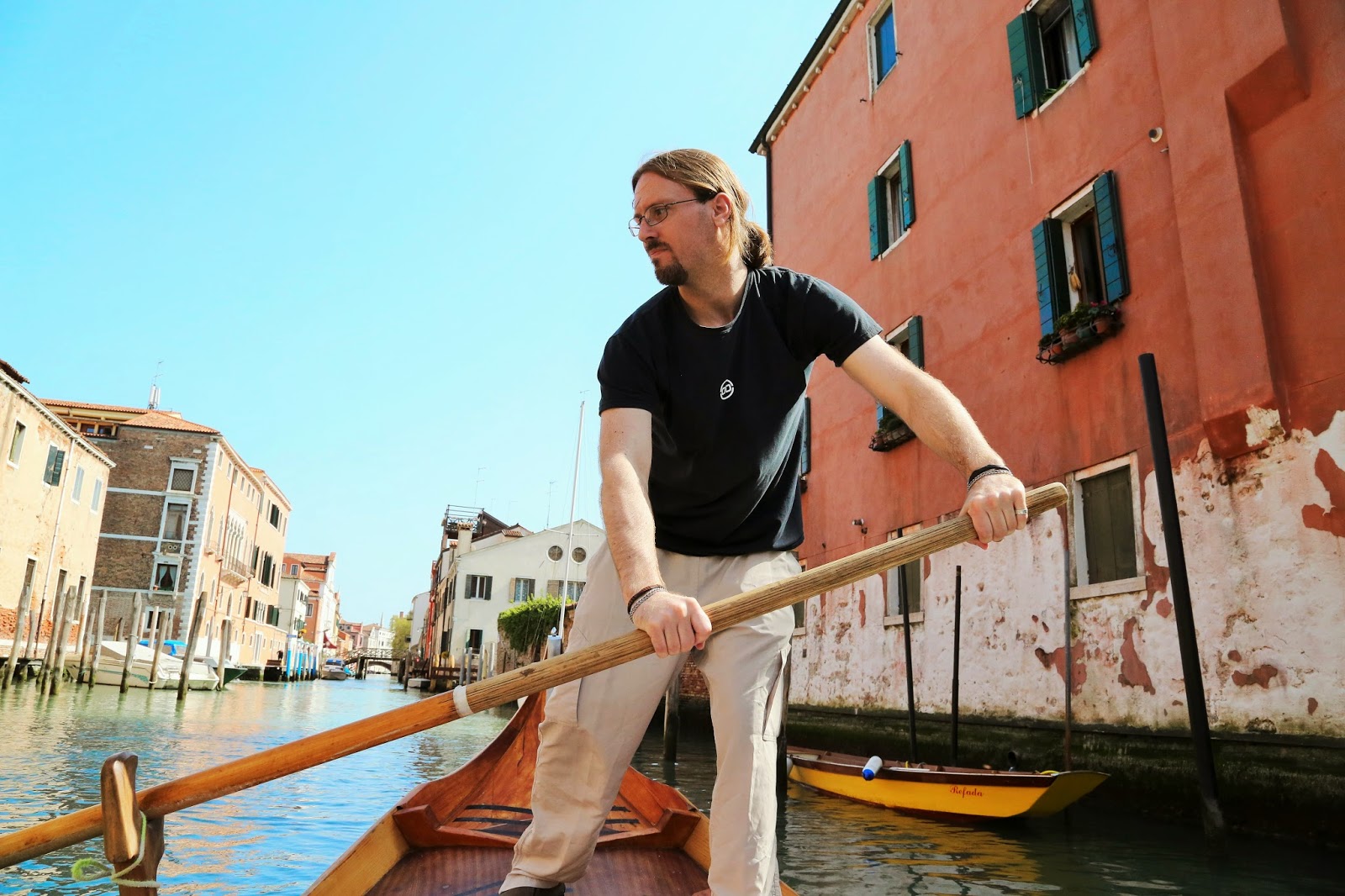 Our RowVenice Experience
by Tim Jones


I first went to Venice in 2001 on a trip with my family.
We were doing a tour of Italy and went to 10 different cities in about 14 days.
It was a whirlwind experience where I really only got a brief sample of each city. Venice was, unfortunately, only a day trip.
I saw the major sites like St. Mark's square and the Bridge of Sighs and of course my first gondola ride.
I remembered thinking as we turned down a quiet canal away from hustle of craziness of St. Mark's just how beautiful and peaceful it was back there.
We quietly drifted under bridges and past old wooden doors to the sound of the gondola oar gently splashing into the water as we went.
For 11 years after that I vividly remembered those narrow alleyways and I desperately wanted to go back one day and just get lost back there.
Finally, in 2012 I took my girlfriend (Dana) (who had never been to Europe) to Italy.  I fondly remembered all the cities we saw back in 2001 and I wanted her to get to see all of them as well...So we extended the length of that trip to 20 days and we spent at least 3-4 days in each of those cities.
Venice was our favorite place though.
Again we took a quiet gondola ride through the canals.
Our gondolier sang a beautiful song while he rowed (which we didn't even ask for, but tipped heavily for later because it was amazing).  Somehow he seemed to row us down the most beautiful and completely deserted canals.
Maybe I was just in the moment, but I don't recall even seeing more than a couple other boats and not a single other gondola.
It was this experience that sparked my desire to one day row one of these boats down the canals for myself.


After the 2012 trip we both said we wanted to go back, but that before we did we would take 5 to 7 years and visit other places in between.
Well....2 years later we couldn't stand it anymore and decided to go back.
This time putting 10 days in our schedule just for Venice.  I immediately set out looking for a way that I could get to row a boat while I was there.
A quick search later and I found www.rowvenice.com.
Dana wasn't sold on the idea at first, and even some of our friends gave us funny looks when I told them we were going to learn to row while we were there.  But I didn't care, I really wanted to do this.
The day finally came and we met up with our instructor (Jane).
She took us to her boat (a beautiful Batela).  We started off learning the basics with Jane in the back while I rowed from the front of the boat.
We turned out of the harbor on the north side of Venice down a quiet and fairly wide open canal with little traffic.  Rowing from the front was not particularly difficult.  I have lots of rowing experience from my childhood.
My family owned a sail boat and we sailed around the great lakes of Michigan every summer while I was growing up.  Dana also had no trouble getting the hang of rowing either, and she had almost no prior experience.
We switched off taking turns rowing from the front a couple times while Jane instructed us.  After about 1/3 of our lesson, Jane told me that she thought I should come to the back and row. 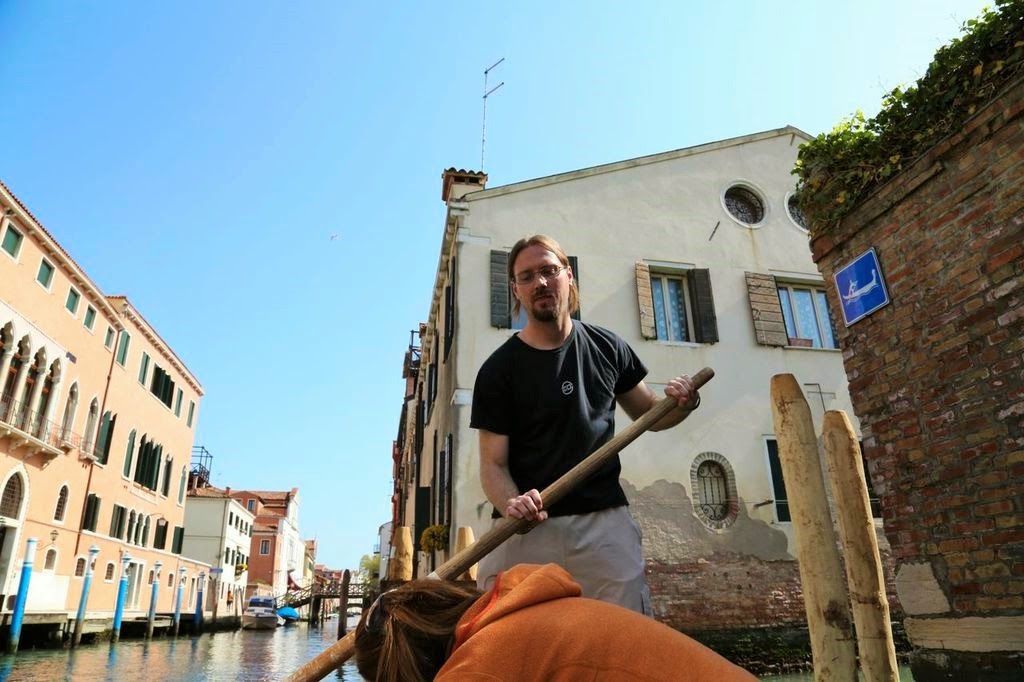 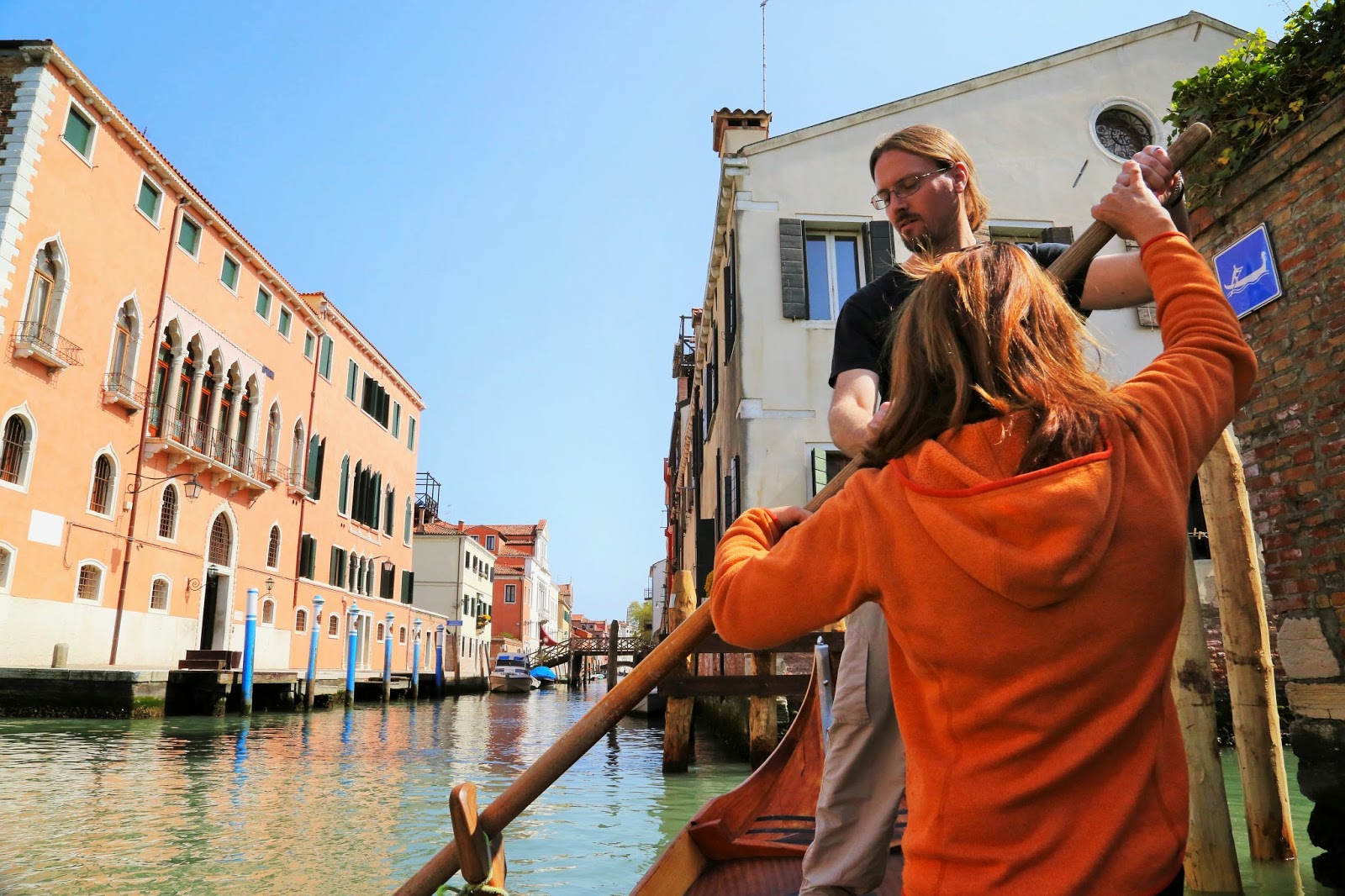 I climbed onto the back and took position.  She explained how I was supposed to steer by turning the oar just so and allowing it to drag in the water to pull the front of the boat back around.  I'd always ever rowed with two oars so this was a little complicated at first.  I quickly learned that if you drag the oar too hard it has a tendency to want to pull you right back into the passenger area of the boat.  Fortunately, I caught my balance before I tumbled forward into the boat.  For a little while Jane rowed in the front helping to provide some forward momentum.  When I started getting the hang of it she quit rowing and just sat back with Dana while I rowed all by myself.  This first canal was a bit of a work out for me.  I was paddling upstream and it was a little hard to keep the boats forward momentum going.  If you don't have forward momentum it becomes quite a challenge to steer the boat.  I did have one mishap where I bumped a wooden pylon, but fortunately it wasn't a very hard bump.  We reached the end of the canal,  turned around another corner and started back down a different canal.
This canal was more narrow and had a little bit of traffic on it.
It was shaded from the sun by the taller buidings and the current was now helping me and the whole experience became easier.
It was a cooler, more beautiful canal and was just the type of canal I had been dreaming of rowing down the past couple years.
Buy this time I was getting a good handle on the boat.
I felt in control and Jane had quit giving me instructions and was just chatting with us while we glided down the canal.
I remember seeing my first low stone bridge coming up.  Not too far beyond it was another boat we were going to have to pass closely by as well.
It was time to see if I really could handle this boat.
I drifted to the left as I approached the bridge knowing that a little ways past it I'd have to pass another boat.  This meant I had to duck down a little more than I would have wanted to in order to make it under the bridge, but I made it. Didn't hit anything or scrape the sides.
We were now starting to get close to the other boat.  I got as far to the left as I could.  Both Dana and Jane got quiet as we approached.  I remember the local man looking at our boat, looking at the two girls sitting quietly together and then up at me.  As we passed by he gave a little wave and said "Ciao" and I replied back to him the same.  Jane told me that its very rare that locals will acknowledge outsiders rowing their canals.
I don't know if that's true or not, but it made me feel like a million dollars.
We were getting close to the marina again and the end of our lesson.
Jane took control of the boat as we were getting close to a very high traffic area.  She said we were her last lesson of the day and she wanted us to experience the grand canal.  Dana took the front position and Jane took the back.  We headed down a busy canal and popped out onto the grand canal.  Vaporetto were whizzing by and Dana nearly lost her balance and went for a swim once as wake bounced her sideways.  But there we were, rowing the Grand Canal.  It was pretty intense and I could tell Dana was a little overwhelmed by it but she was doing great.  We didn't spend long on the grand canal and turned and headed back to the marina and the end of our lesson.  After we began walking back towards the center of town looking for a place to grab some dinner we were talking about our favorite moments of the whole experience.  I was totally exhilarated by my experience rowing that quiet canal, just the way I had hoped it would be for the past two years, and Dana, several times over the next few days bursting out from quiet moments with
"I can't believe it....I rowed down the Grand Canal!!!"
We are definitely doing this again the next time we are back to Venice.

My sincere thanks to Tim for the above story, photos, and video.
To read more about Row Venice, visit their website http://rowvenice.org/ 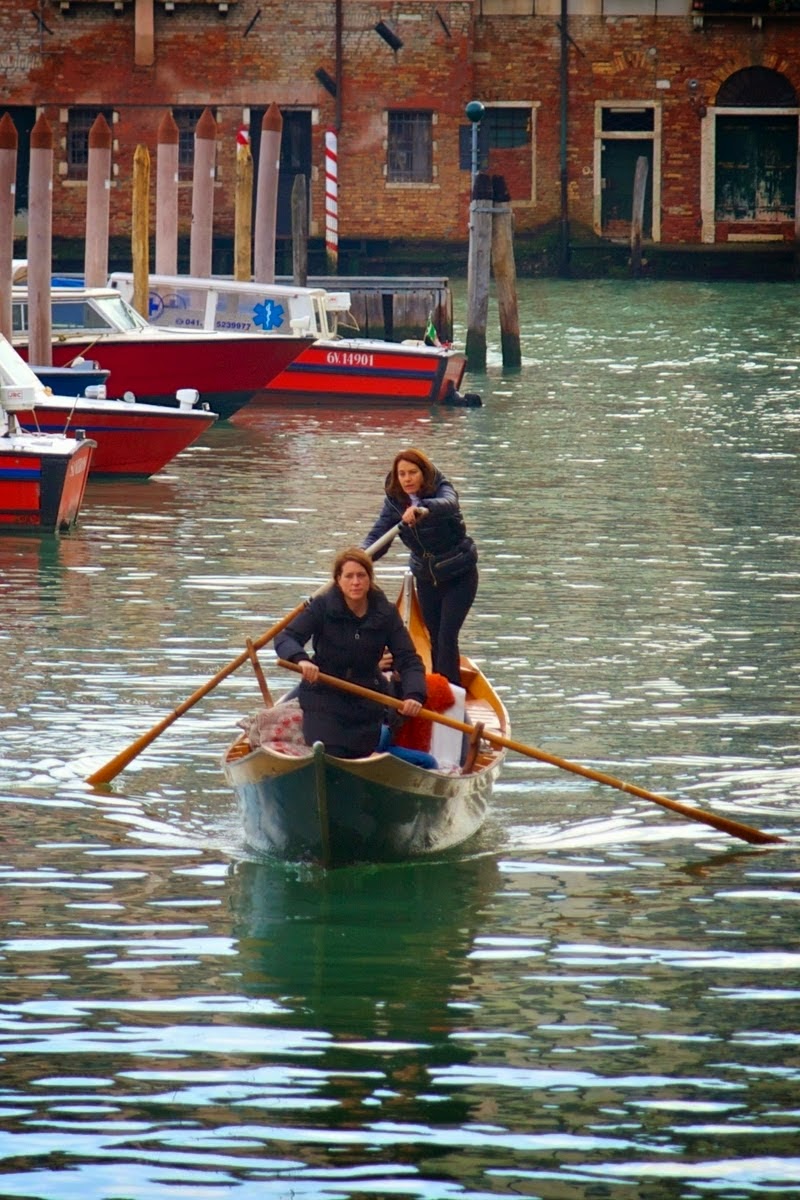 For further reading within the Gondola Blog, check out
"Rowing Lessons in Venice"
photo by Nan McElroy
Posted by Gondola Greg at 1:26 AM