photo and story by Joey Hamamoto 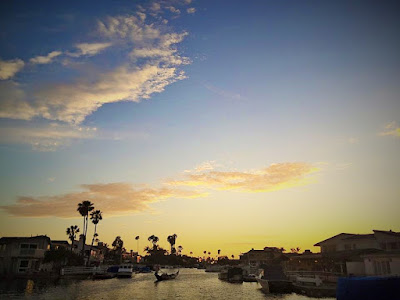 Recently one of my gondoliers reached the twenty year mark.
Joey has become one of my dearest friends.
He went from a newly hired employee,
to a guy who's wedding I was asked to perform, years later.

A lot has changed,
including our way of handling things on the water.
As you read Joey's story, remember that when he began with us,
we were running motorized gondolas that were owned and maintained by another company.  We also don't venture so far from our base of operations.
The boat was retired years ago, but the friendship and memories endure.


~June 1996, my first gondola cruise~
It was in the early afternoon that I came down to interview for the gondolier position. About 20 minutes later I stepped foot on a gondola into a whole new world.
Gondola Greg and I cruised around the harbor for a couple of hours. We passed houses and people with the sun on our backs and the wind in our face.
While cruising Greg received a call. I thought to myself, "This must be a really important guy...he's got a cell phone." Remember this is the 90's so everyone has a pager. Cellphones were not as common as today. When he finished his call he said, "So do you think you've got the hang of it?"
I said, "Oh yeah, in 2 or 3 weeks I'll be a pro."
He said, "Good you have your first cruise tonight at 7:30pm."
Talk about a sink or swim opportunity.
7:30pm comes and the gondola is all set. Champagne is chilling in the bucket, glasses and Godiva chocolates are neatly placed on the platter, and I've got just about everything I need to have a perfect first cruise. The only thing I didn't have was a radio or some form of music...Looks like I'm singing.
I saw a older couple probably in their late 70's or early 80's coming down to the dock. It didn't occur to me to look at the occasion that they were celebrating that was written on my trip sheet.
I said, "Can I help you folks?"
The husband replied, "Are you Joey?"
I said, "Yes, you must be..."
Turns out this was my client and they were celebrating their 50th anniversary.
If you ever want a challenge try to help a couple in their 80's get in and out of a gondola.
So I got them into the gondola and we're cruising along. I have no music and I've probably sang every song I could remember including the song I sang in the high school choir. Those of you who were in choir with me know what I'm talking about.
The gondola is motorized electric so being that this was my first cruise I wanted to cover as much ground as possible. Now keep in mind I had the boat in high gear. The higher the gear the harder the engine runs. The harder the engine runs the quicker you lose power. Needless to say the boat lost power around the Corona del mar jetty near the wedge.
So let's recap:
I have an 80 year old couple celebrating their 50 anniversary in my gondola on my very first cruise, I have no music and I've sung every song I could possible remember, we're a million miles from were we started at a time when cellphone are practically nonexistent to the common man, and the boat engine is dead.
Fortunately there are two things that can potentially save me from this being my last gondola cruise. I have a flashlight and a couple with a great sense of humor.
With the flashlight I was able to call a fishing boat over to tow us in.
When we got back to the dock I couldn't stop apologizing enough for the fact that the boat died. This was their 50th anniversary and I blew it.
The husband said, "Son, this was very fun and we will remember this always...thank you."
They even called the office to rave about how much fun it was and how I helped make it memorable.
Fast forward 20 years:
Last night I had cruises and couldn't stop thinking about that night. When you're a kid with your whole life ahead of you, you've got this large window of opportunity and perhaps it's easy to get upset over things that aren't actually perfect.
Someday when you're trying to hold onto the past and the window's of tomorrow seem less open. And you find yourself closer to the end of your journey than the beginning, perhaps it's easier to just let things go and cherish the time you have.
At least, that one man's opinion.
Posted by Gondola Greg at 11:09 PM