I Love New York in June 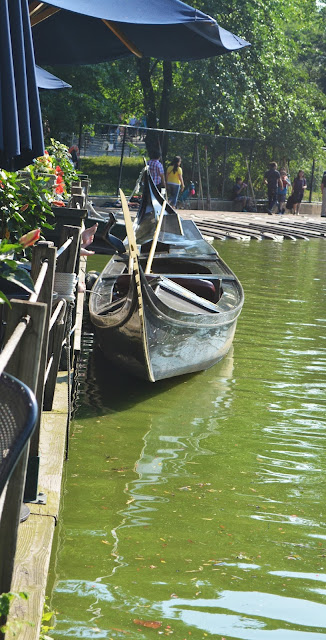 Last Sunday I found myself in New York City with a little time to spare,
and I set out towards Central Park to look up my friend, Andrés García-Peña.


Arriving at Columbus Circle, at the South-West corner of Central Park, I jumped in a pedicab and took in the perfect weather as the driver took us through the park.  As the blur of greenery and happy people passed by on both sides, I chatted with my driver, who was wearing, appropriately enough, a striped shirt. 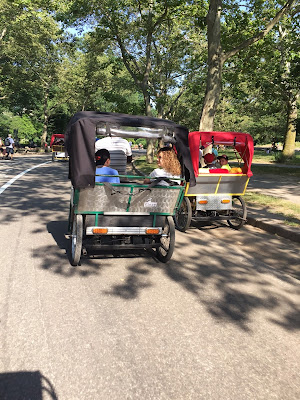 A few of the other pedicabs on the path. 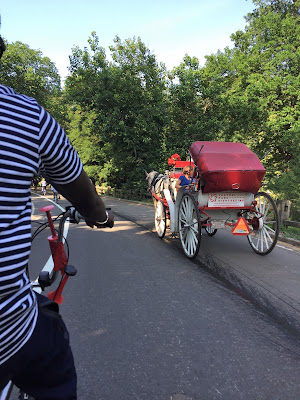 One of the famous horse-drawn carriages of NYC.


The pedicab rolled to a stop at the famous Bethesda Fountain,
overlooking part of the lake.
I took a moment to scan the water and appreciate the fountain that's a gem of a landmark in New York City. 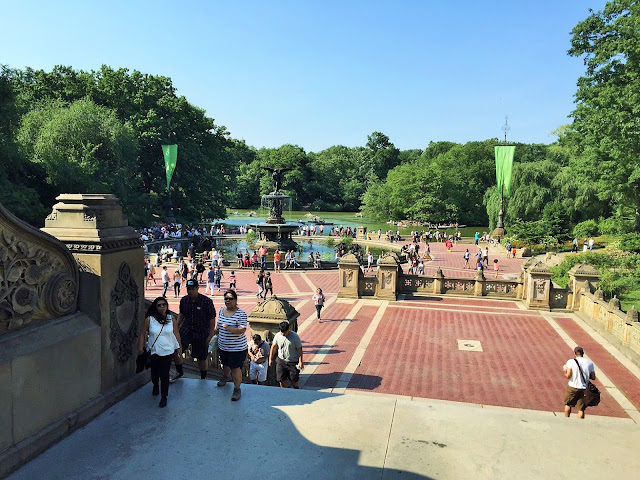 I jumped out and headed down towards the Loeb Boathouse, where the gondola takes off from.  By far the most active (and pervasive) boating activity on the lake is the rowboat concession.


Like a huge flock of aimless and clumsy geese, these white rowboats are everywhere. 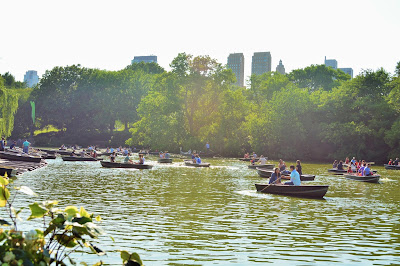 This was the view from the dock.
The further you go around the corner, the more rowboats you see.
On a perfectly beautiful Sunday afternoon, the line to rent those rowboats was frightfully long.


Making my way along the dock, I saw her – black and shiny, awaiting her next guests.
Andrés was nowhere to be seen, but I found him inside, and after some loud happy handshakes and backslaps, we were heading towards the boat.  Andrés had a half-hour gap between cruises, and was just about to give a short ride to someone associated with the restaurant.
He said “you wanna come along?”, and I said “you don’t have to ask me twice”.


Ten feet off the dock, I was invited to row, and again there was no hesitation. 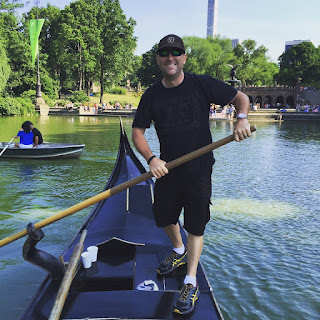 I found myself navigating around dozens of rowboats, waving and calling out to them.
Halfway through I mentioned something about not wanting to bump into any of them and Andres said with a smile “I’m surprised you haven’t hit any of them yet.  I usually hit four or five of them during a cruise…sometimes on purpose!”


Remember that neither rowboats or gondola move at much of a pace, so bumping is minimal.


Sure enough, as if it had been spoken into existence, upon turning, I made contact with a hapless rowboat.  Everybody laughed, and I smiled along with Central Park’s gondolier and our guest. 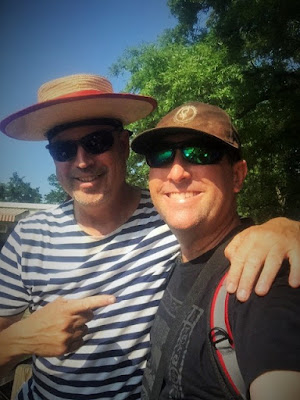 It is my opinion that Andrés Garcia-Pena is the most seen gondolier,
the most observed gondolier in the world.


A few other worthy contenders being the guy who rowed the gondola in that James Bond film, and of course, Alex Hai, in her trademark crisp white uniform with dark dress shirt – being featured in news articles certainly made her the most well-known and talked about gondolier.
But as far as being seen, I think Andrés is the guy.
Sure there are lots of guys who row in prominent, visible areas in Venice, and the same holds true for the folks who pilot boats at The Venetian casinos in Las Vegas and Macao.
But in Central Park, there’s only one gondola, and most of the time, only one guy rowing her.

He’s been there for decades, and yet he still has the glow of someone who truly loves their job.
New York City has been called "the center of the world", "the capitol of the world", and even "the new Rome". 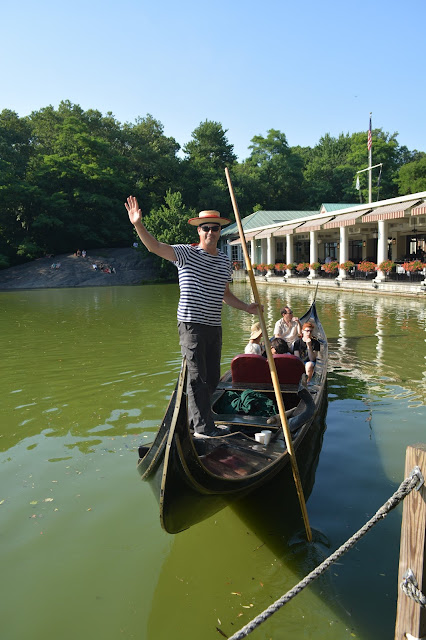 The gondola looks great.  She sees a lot of traffic,
but she’s none the worse for wear.
Andrés has a solid Paolo Brandolisio remo to row with;
it felt perfect in my hands. 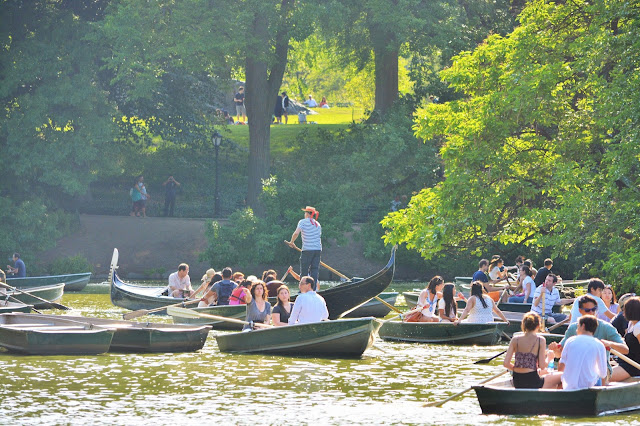 Making our way past the Bethesda Fountain I took it all in:
afternoon sunshine beaming between Manhattan skyscrapers, romantic couples rowing by, folks in the park enjoying the kind of weather they’d probably spent all winter looking forward to.

I gained a new appreciation for the song from the 1940's that says:
“I love New York in June, how about you?” 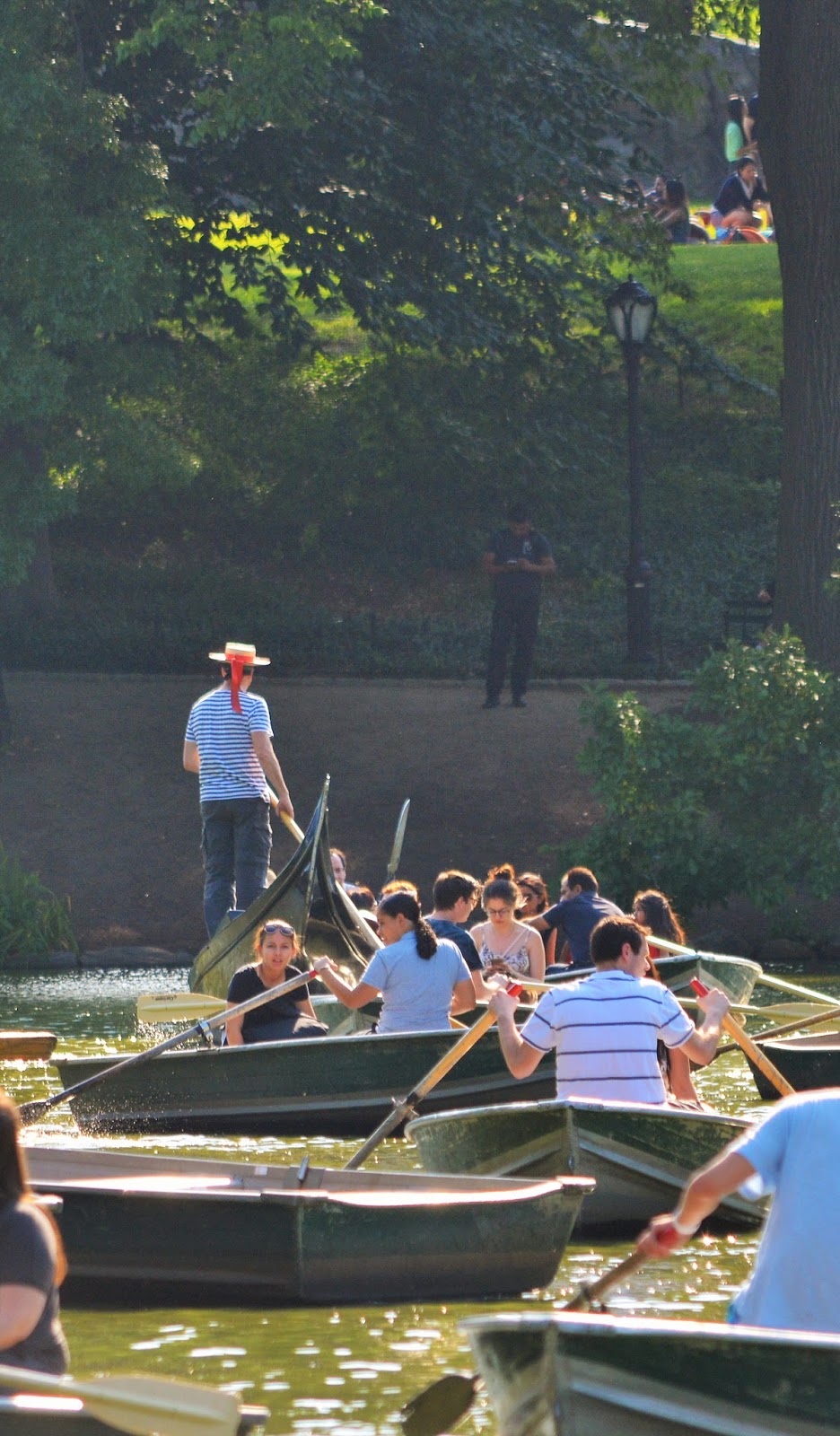