A while back I posted a photo from Minnesota, with the guys from Gondola Romantica working on one of their boats.  They had the boat on an A-frame hoist, and were using the battery of John's truck to power the hoist motor.
Meanwhile, in Germany, another gondola owner named Carlo saw this photo and assumed the worst: that an American gondolier was mounting a Toyota truck engine in his gondola.
A valid concern, given our tendency to do similar things.
For the record, John Kerschbaum is not mounting Toyota engines in his boats (but if he is, I'd like the one with more horsepower during my run in the upcoming US Gondola Nationals).
Carlo sent me this dispatch a while back, along with some photos.
There's a humorous angle, but he does have a clever little invention to share.


Hello Greg,
The "John Kerschbaum Toyota-engine scandal“ inspired me in addition to my facebook posts, to write an appropriate answer to the public. We should keep calm and forget about powering up our wooden gondolas with SUV-engines.
Otherwise we will end up with atomic power engines blowing us and our beloved gondolas to the moon. But there is no water on the moon.
Breaking News!!
The Germans are on the edge to pimp Gondolas!


The very new invention is the 1.000$-fully-chromed-Copper tube, also known as RATAW-device (Rain-Air-Tube-Air-Water ). It will be soon available in the upgraded RATAG-version (Rain-Air-Tube-Air-Ground) for groundbased Gondolas, but this development is not finished yet due to the earthquake issue.


For hundreds of years in Gondola-building  the Gondoliers have been wondering about the woodfading behavior of Gondolaplanks at the end of their gondolas.


It is an endless story of pain, surprise, and immense costs.


Rainwater runs down from the aft cover - to the end of the Gondoliers platform and surely finds its way through the wood and directly to create mold inside, consuming the expensive gondola wood.


There are four main solutions to this problem – but German engineers did add a fifth mindblowing one now.


1.       seal the wood with thick layers of paint and or epoxy and dry the visible waterpitch any time and day by  day with a sponge, or cover the gondola properly with sufficient  type of fabric-tent.


2.       modification of the gondola by drilling a draining hole at the deepest point of the upper deck and the water disappears immediatly for ever! (most common)


3.       in addition to 2. make two big holes at every side of the gondola below the gondoliers platform and dry the water inside the gondola by heatgun (as seen on regatta-gondola-hole-bow) – it´s not due to aerodynamic reasons (as we are told frequently).


4.       in addition to 2. insert a short 2 inch copper tube into the hole, glue it carefully into  position and place an empty beancan beneath – a great one is better to increase the hitrate and the maintenance intervalls – a flat one is better to dry out by itself (quasi maintenancefree)


but anyhow check for corrosion of the can after 20 years of operation or earlier.


5.       the very new and mindblowing hightec solution after several hundreds years is:
drill a hole advised at 2. and then drill a second hole at the end of the lower brass protection of the lama da poppa (risso)
enlarge the tube in 4. to the length of 20 inch and bend it to fit inside the two holes


don´t forget to let the tube stick out (only at the down end) a little bit to prevent the downrunning of water at the outside of the gondola.


It´s very easy to glue both ends into the gondola if she is opened at the bow for replacement of wood.

Carlo is, of course, talking about a low-lying area of deck behind the gondolier, which can become a pooling spot for rainwater.
I hardly ever have this problem because there appears to be a federal law against rain in Southern California.
In Germany, however, this is probably quite an issue.

Here are the photos he sent me: 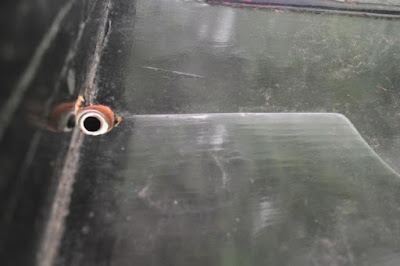 Top view of the tube 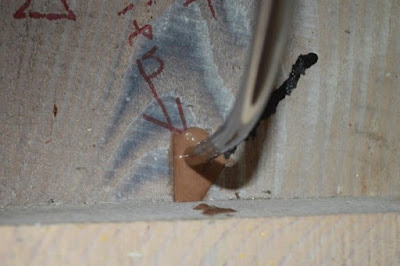 Looking at the tube from under the deck 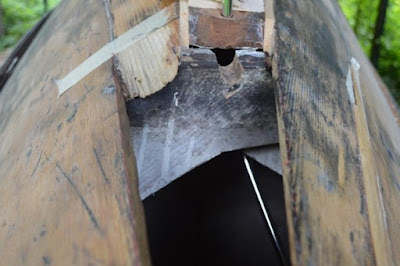 Where the tube ends (with some planking removed) 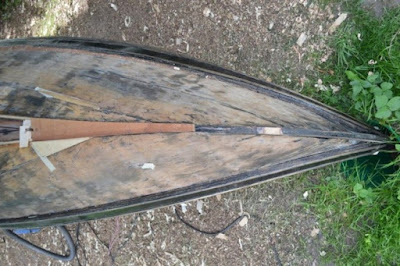 Wider view of the underside, with planking replaced.
The tube end is to the left.
Carlo went on to say:

And if you are a “Streber“ you can widen (not drilling) the mostly very little spider-home drainholes in the floor plates (very carefully not to damage the spiders and bottom planks!!) and pull a endless rope thru those holes – now you are in power to clean up the (spider-web-messy-crap sealed) drainholes in the very end of the Gondola, where the sun didn´t shine (exception: woodreplacement) by simply pulling the rope.


You never ever have to call a boatbuilding master for maintenance due to faded wood in the bow.


This is the official story.
The secret is:
The 1.000$-fully-cromed-Copper RATAW tube could be used to exhaust the  next development step: a probably invisible German nanotec - highpower engine (3 times Toyota SUV) answering  the John Kerschbaum Toyota-engine.


There should be a law to prohibit mechanical, geothermal, electric, solar, wind, nuclear and other  nonhuman powersources for Gondolas to prevent further escalation!


Officials statement: thats  the reason why Germans and John may be not allowed to compete in the Nationals this October with their modificated gondolas.