The Gondolier
Richard Corbaley grew up in a small town in the mountains just outside of Yosemite.  Among other things, he enjoyed swimming in cold, glacier-melt pools, free-diving for fishing lures.
When he came to the coast he started surfing in 2011, and that summer he started rowing at Sunset Gondola under the instruction of Tim Reinard.

His First Nationals
In 2013 the US Gondola Nationals was hosted by Sunset Gondola in Huntington Harbour, California.
Nobody knew how he'd do, but his boss Tim, and a friend, Stefano both told me they thought he'd compete well in the races.

Sure enough, in the solo distance race,
Richie came in 3rd overall, winning the bronze medal.
Details of the race can be found in the post "Spent".

His good friend Stefano ended up coming in first.
Details of their finishes and standings are in my post "First and Third". 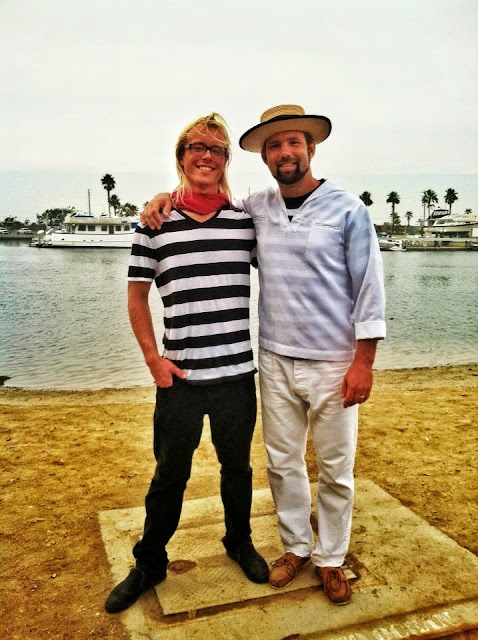 Stefano and Richie - first and third.
photo by Dawn Reinard

His Second Nationals
in 2014 the US Gondola Nationals took place in Providence, Rhode Island.
Richie had a little more experience under his belt.
He'd been in a competition and knew more about this kind of rowing.
The solo distance competition that year was a two boat head-to-head format.
Richie ended up on a boat next to Eric Bender from The Gondola Company in Coronado, CA - who had finished second the previous year.
Details and photos of the race can be found in my post "Solo Distance - "Snapper" and Richie". 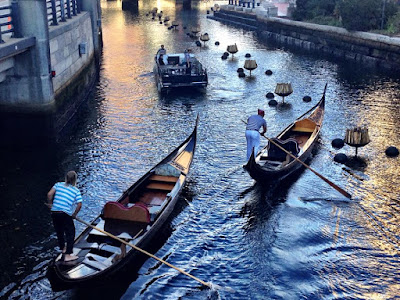 Richie and Eric trying to get past an unexpected obstacle.
photo by Cole Hanson

There was plenty of racing drama.
they pushed each other the entire way,
and the end result was a first and second place finish.
Bender took the gold, Richie, the silver.

Last Weekend - 2015 US Gondola Nationals
This time the races were held in Newport Beach, in the waters around Balboa Island and her accompanying islands.

Fifty competitors converged for a two-day event on November 14th and 15th,  2015.  This was the biggest field of racers yet assembled - meaning he'd have to be faster than even more guys than before.
The solo distance event was a four boat head-to-head - plenty of chance for chases, pursuits, and other race drama.

The Course
The route was a counter-clockwise run from the Bahia Corinthian Yacht Club, heading north and passing beneath the Balboa Island bridge.
Racers continued west until the small eight-home island, Collins Island at the end of Balboa Island.

The course turned south-east, crossed paths with the car ferry,
and then east, hugging Balboa Island.
A final turn to the left set racers on a return to the yacht club
for a last dash to the finish line.

The total distance: 2.2 miles from start to finish.

A Near Rematch
I spoke with Richie about this most recent race.
Richie told me that he and two other guys were on their boats,
waiting for the fourth boat to load so they could all line up for the start.
Initially the fourth boat had Eric Bender on it,
but another guy wanted to race, so Bender obliged.
Richie was disappointed that he and Eric wouldn't get a chance
to race directly against each other again.
But right before the start, Eric told him that He'd "better win this race!"

Also at the starting line was gondolier Ben Landis from The Gondola Getaway in Long Beach, California.  I'd heard several people talk about Ben and how he would be "one to watch" this year. 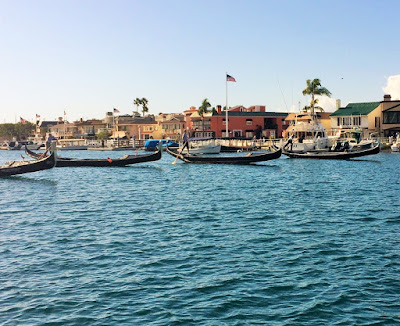 Gondoliers ready and waiting to start.
photo by Amora Ray

Go Time!
The signal was given and the race began.
Richie and Ben started to pull away from the other two rowers.
Ben had the inside track.
The gondoliers and their two boats were neck-and-neck.
Approaching the Balboa Island Bridge, they chose separate arches
and continued to travel alongside each other all the way to the
turn at Collins Island.
Richie started to pull ahead, and after the turn
he moved into a more inside track, hugging the island. 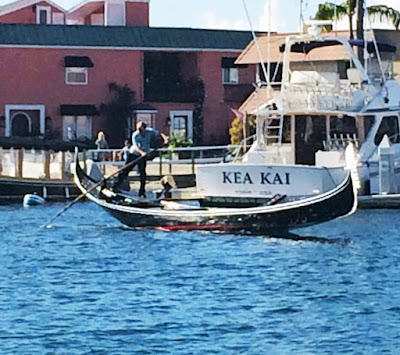 The two rowers have been friends for 4 years,
so they talked a little - joking and teasing each other.
Ben said:
"hey Richie, I'm dying here"
Richie said:
"yeah me too."
Ben:
"you can slow down, I won't catch you."
Richie knew better than to do that.

Doing his best to take the shortest route possible, Richie rowed as close to the shore as he could, struggling sometimes to avoid the bowsprits of moored vessels.
A crosswind from his starboard side tried to force him into boats and obstacles.

At one point, before reaching the Balboa Island Ferry, he actually had to jump off the gondola onto a dock, turn the boat and shove it back out.
He told me "Anything to save the boat"
(I was thankful to hear this, because he was rowing one of my boats!)

Ferry Crossing
All racers had been told to be careful not to block the car ferry that crosses between Balboa Island and the peninsula.
In the hierarchy of vessels in Newport, all other boats, by law,
must yield to the ferry.

Following the shore of the island,
Richie could see the cars driving onto the ferry.
The ferry only takes three cars per trip,
so it doesn't take long for it to load.

Richie said
"I knew that it would be a race against time to make it past.
As the final car was loading, I put on the gas.
The ferry engine started.
Before the ferry pulled out, I passed it within 2 feet of the back of the boat, looked back and Ben had made it too."

According to Ben, it was
"Just barely - I was surprised they let me go by."

Final Approach
After the ferry terminal, Richie felt a second wind coming on.
He reset his body position,
changed the angle of his stroke,
changed the technique of his return stroke,
and really started to pull away.

Coming around the last turn, Richie sensed a tail wind
allowing him to row without any correction.
"From then on I was able to row with no return stroke,
stood as far back as I could and powered home."

After the Race
Richie crossed the finished line faster than anyone else that day.
He credits many for the success of this race, especially Ben Landis,
who challenged him the whole time.
"I think that without Ben next to me or right behind me,
I would have settled in and finished with a longer time."

That's one of the great things about head-to-head competition.
As it happened, Ben received the bronze medal that night for third place.
He earned a silver in the solo sprint as well that weekend.
Ben Landis was indeed "one to watch",
and he represented his company well. 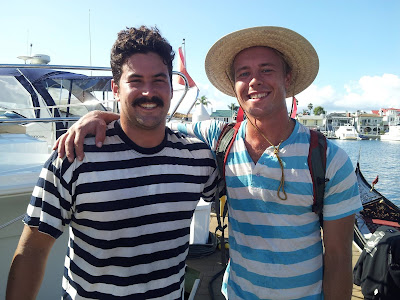 Ben Landis and Richard Corbaley
First and third - deja vu.
photo by Amora Ray
Ben told me "finishing that race and shaking Richie's hand was one of my favorite moments of the weekend."

After getting back on the dock, Richie gave Ben a really big hug,
and his girlfriend took a photo of the two of them.
Rivals in the race, friends everywhere else, really, kind of like brothers.