Off the Boat and onto the Ship 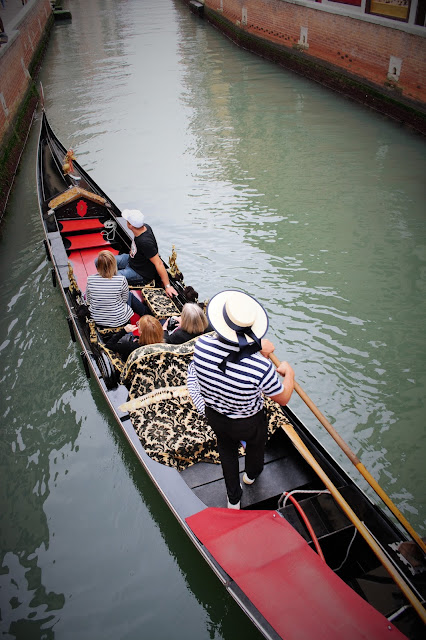 Somewhere in the middle of the Adriatic last night, I drifted off to sleep – aided by the rocking and rumbling of the engines eight decks below in the Royal Caribbean ship we’d boarded earlier in the day.

It had been a long week of nearly constant adventures in Venezia.


We flew into Marco Polo, entered the city by water taxi, moved into our apartment,
and jumped immediately into “GO” mode.

My gondolier Simon and I met Nereo Zane at the Fondamente Nuova and we all boarded a moto-navi ferry for Burano, where we watched the last big regatta of the season from the back of a GSVVM club chase boat.


The whole idea being that to better host the upcoming US Gondola Nationals competition,
I should get a better look at how they do things in the Veneto.

For the next week, Simon and I woke and were out the door earlier than most Venetians, catching the tram to the Punta San Giuliano stop, walking to the club, and rowing with maestro Mario Rossetti (who would pass us each day on his bicycle).


Mario and Nereo had us rowing all the different stations on a four-oar sandolo,
tending to each and every aspect of voga-alla-Veneta that we had wrong
(and that seemed to be a full time job for them).

Wanna feel unworthy of the craft of Venetian rowing?
Spend time on the water with a bunch of old guys from a rowing club in the Veneto.


We were surrounded by men who were all in their sixties and seventies, all of whom were in better shape than us, each rowing with absolutely perfect form.


In the afternoons and early evenings I gathered supplies and picked up the various items I’d ordered – from brass to hats, to pom-poms for the gondolas.


I received double-cheek-kiss greetings from hat maker Guliana Longo,
had coffee with master oar and forcola carver Saverio Pastor,
and got a remarkable personal tour of the Valese foundry – learning about the many processes necessary to produce the gorgeous shiny brass horses we have on the sides of our gondolas.
To call it a "walking tour" of Venice would be a lie.
Many times it was a "running to catch that vaporetto so we can get to the shop on time" tour.

Many nights we crashed early and didn’t sleep nearly enough,
waking again the next morning only to hit the ground running.
We'd grab espresso and cappuccino at a counter next to Piazzale Roma.
I wish I could have seen more friends and gone more places in Venice, but the time did not allow.


I boarded the ship exhausted and in great need of sleep,
Even so, as I sat down for a sandwich in the upper deck dining room,
I looked out across the lagoon and spotted my rowing club.


Immediately my thoughts went into calculation mode:
“If I get off the ship now, I can use my ACTV pass to get on the tram,
It’ll take me twenty minutes to get to the GSVVM.
In another twenty minutes I can have a mascareta hoisted into the water and get about an hour of rowing in before I have to do it all in reverse”.
I definitely have a healthy obsession.

I awoke this morning, somewhere off the coast of Croatia.
For the first time in a week, I had a full night's sleep - working my way out of the territory of "sleep debt".

In the next week I will explore towns in Croatia, Greece and Turkey, and yet all the while I'll be thinking of my time in Venice.