Warming Up the Lucias

In the days leading up to Vogalonga, Venice seems to attract boats like a giant magnet, drawing them in from all over Europe and even from other continents.


Rowers, paddlers and practitioners of all sorts of human-powered conveyance make the pilgrimage to La Serenissima - and if they can manage, they bring their boats too.
Some boats are more portable than others, and such is the case with a certain type of boat that is particular to the lake country north of Milan. 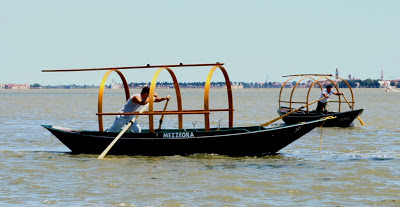 I spotted these two guys just off the hoist by the GSVVM - they were out for an afternoon row in preparation for the Vogalonga of 2009.

These boats are generally referred to as "Lucias",
and most famously represent Lake Como.

In a way they remind me a lot of wide sandoli,
but most folks don't see past their characteristic three hoops. 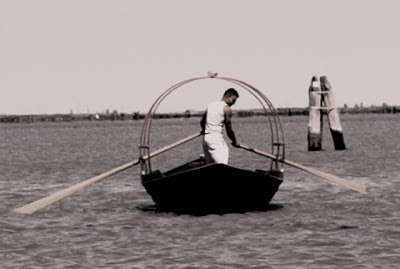 rowing is usually done by one or two vogatori per boat,
and traditionally they stand, facing forward, and row with two oars
(but not crossed like in the Valesana style).

A closer inspection of one of these vessels can be seen in my post:
"Three Hoops from Lake Como"
Posted by Gondola Greg at 11:00 PM

Go to google and search for "immagini promessi sposi".
The first link should take you to a gallery of images. Among them there are some drawings of "Lucia".
Nereo