White gondolas are few and far-between.

Long ago the Venetian government decreed that passenger gondolas were to remain black.
The only white gondolas I know of in Venice are racing gondolas. Each official regata is rowed in a group of identical boats. The only differences being the rowers choices of forcole, remi, and the colors that the boats are painted. Typically there are nine colors and white is one of those colors. 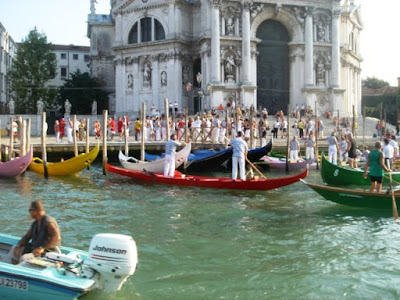 You can see a few racing gondolas among the many Commune boats in front of Santa Maria della Salute church. I shot this photo from the vaporetto the day before the 2005 Regata Storica. Somewhere in there you can see a white one. The unusual "vents" in the tail are unique to racing gondolas.
There are rowing clubs in the Veneto who's color schemes may involve white, such as the Cannotieri Treporti, but again, not a passenger vessel taking riders for hire. 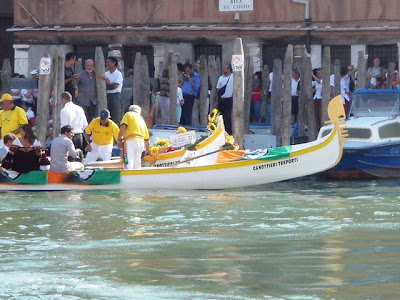 One of the Cannotieri Treporti club boats.
I am not above correction though, so if anyone out there has seen a white gondola taking passengers in Venice, Italy, I would love to hear about it.
I'd be surprised though, as that would be a big, highly visible violation of Venetian law.
The Venetian Casino in Las Vegas does have one white gondola in their fleet.
She is known as the "Wedding Gondola", and while she has the same hull and passenger layout as the other boats there, her deck-accents and other metal accessories are gold plated. 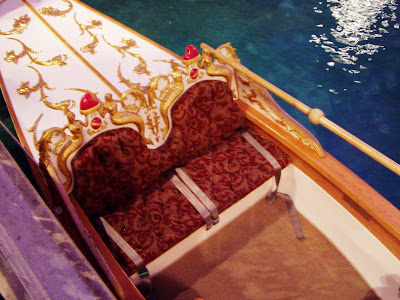 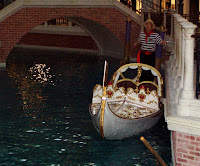 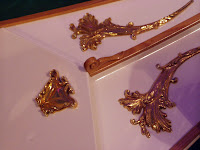 Here in Newport Beach, there are a number of white gondolas afloat. Joe Munday's "Crystal Swan" is white, just like many of the other gondolas he built over the last two and a half decades. 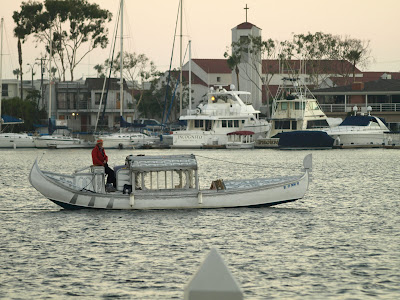 Joe Munday on his Crystal Swan
Gondola Romance also has three white gondolas which were all built in the early 80's.
Interestingly, all of America's white gondolas have been motorized except one - the mysterious white gondola of Venice, California. The only photograph of this boat was on a post card circulated in the very early 1900's. To read more on this vessel, see my post from March 4th of 2002 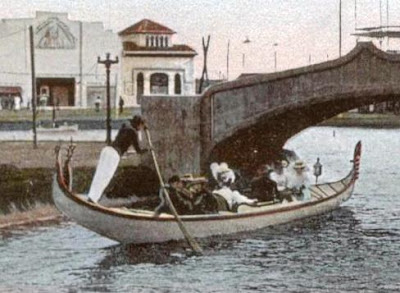 Venice, California in the first decade of the 20th Century.
Here in the US, white boat paint is much easier to come by. Compared to black, it is easier to keep clean too. But a white gondola, in a field of white boats, is another white boat - it tends to blend in. While a black gondola with a background of white boats stands out beautifully, leaving little doubt as to what type of vessel she is.
The story of a "very large white gondola" transporting couples from Isola di San Giorgio Maggiore is a new one to me. The presence of a white passenger gondola in Venice would be highly unlikely though.
I have seen a photo of another white, crescent-shaped rowing boat in Venice that did take passengers...of a different kind. Back in the days when the only motorized vessels in the city were the original vaporetto boats, everything else was rowed...including ambulances. In one photo of the Grand Canal, which I have but don't know if I can post, there are vessels that look like white traghetti, with felze-like tops, that have red crosses on sides.
Were they "ambulance gondolas"?
Maybe.
The photos I've seen of these vessels have all been monochrome, so I'm only assuming that they were truly white. They could just as easily have been light gray or even bright yellow.
I did see a white Venetian gondola with passengers once.
It was in a photo from Ingo Stahl in Germany: 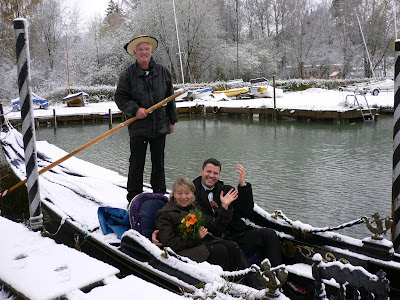 But I understand that the white on that boat was temporary.
Posted by Gondola Greg at 11:22 PM

> In one photo of the Grand Canal, which I have but don't know if I can post, there are vessels that look like white traghetti, with felze-like tops, that have red crosses on sides.
Were they "ambulance gondolas"? <

Prominent red crosses could imply war-time service, especially if there are several such white boats in one picture. Maybe those are WWI gondolas, which ferried wounded between land hospitals and arriving hospital ships in the Venice port?

There´s a very interesting story about why most gondolas are now black. Whether the story led to the law, I can´say, but the story is interesting. Can you tell it to us?

On a lighter note, Italy has recently been invaded by white gondolas, not on the venetian canals, but TV canal.

However, the secret of white gondolas is so embarrassing, they pulled the whole RAISat package off the air effective Aug 1st to hide it...

There are at least four different theories about the origin of pitch black colour, probably even more.

mr. Feher,
are you drunk or under effect of some kind of drug? I hope that Greg will prevent you from publish your idiot comments soon.

> under effect of some kind of drug

The third comment is not a joke, just do a Google search for Amano + Aria.

(Of course its recent airing was not the reason for the sudden RAI-SKY tv breakup, that part was just a joke.)

On you tube there is a video from a travel film archive which shows a cow on a large sandolo type vessel in a canal. The owner milks her and sells the milk to a waiting woman.

Guess the cow came from St'Erasmo or maybe Mazzorbo? There is nothing like fresh milk, especially if it rows for itself 8-)

Until refrigeration was invented ocean ships carried cows onboard.

Until 1400 or so there were horses and cows in Venice. Population grew and the city council eventually banned horse travel to keep the calles from clogging up.

Now some propose to revive this tradition for handicapped access, maybe with ponies?

OK, well, as intersting as it is to talk about having cows on ships to provide fresh milk,
and ponies carrying handicapped people around Venice...
both have nothing to do with WHITE GONDOLAS!
I truly DO appreciate having readers comment on my posts - but I must insist that from now on, we keep things relevant.
If there's something you'd like to ask me that is off-topic, feel free to e-mail it. Let's keep our focus on the topic.
I welcome posting ideas as well. It's really great to know what readers want to see in the future.
my e-mail is greg@gondola.com

With respect to all who read here,
Greg

The Iowa State Fair has boasted a "Butter Cow" since the early 1900s. The origins of butter sculpting, however, are far older than that. Nearly 20 years before Columbus discovered America, Tibetan monks used yak butter to create figurines of animals and deities for worship. Since then, this humble craft has evolved into high art.


In 1911 J.E. Wallace of Florida sculpted the Fair's first butter cow and was succeeded by Earl Frank Dutt of Illinois. Norma “Duffy” Lyon of Toledo, Iowa, continued the legacy, becoming the third person and first woman to sculpt the Fair's butter beauties.


In 2006, after 15 years of apprenticing with Duffy, Sarah Pratt of West Des Moines became the Fair's fourth butter sculptor. In addition to her first Butter Cow, Pratt also crafted Superman of “Superman Returns” (Norwalk, Iowa, native Brandon Routh, who starred as the man of steel) and "Mr. State Fair" Bill Riley (in honor of his 60th Fair).

The Butter Cow starts with a wood, metal, wire and steel mesh frame and about 600 lbs. of low moisture, pure cream Iowa butter. Once inside the 40-degree cooler, layers of butter are applied until a life-size butter cow emerges - measuring about 5-1/2-ft high and 8-ft long. Each year features one of the six major dairy breeds – Jersey, Ayrshire, Brown Swiss, Holstein, Guernsey and Milking Shorthorn.

While a real dairy cow weighs more than 1,000 pounds, a 600-lb. butter cow would butter 19,200 slices of toast and take an average person two lifetimes to consume, according to sponsor Midwest Dairy Association. Much of the butter is recycled and reused for up to 10 years.

The Midwest Dairy Association has commissioned all the Iowa State Fair Butter Cow sculptures since 1960.

SEAN!
You are totally freakin' OUT OF CONTROL!

Tibetan monks?
High art?
If you wanted me to do a post on butter cows, you should have sent me an e-mail.

Get with the program, man!

If I show up to my docks tomorrow and find even a spoonful of butter on one of my gondolas...
OOOOH, you make me so mad!

> both have nothing to do with WHITE GONDOLAS! <

This is an embarrassing white gondola, straight from italian RAI-Sat TV.

Great comment Sean, I didn't know half that stuff.

Greg, thanks for creating a forum that brings joy to so many.

LOL, Sean. I had tears in my eyes after that post.