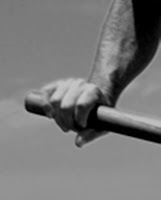 Returning to the Mainland

It had been a long day by the time we started across the "shallow sea of cabbage".

The wind swept over the Ponte della Liberta, pushing us gently to the side and reminding us of how lucky we were to have partial cover. If the wind were hitting us at full strength, we would have to struggle to keep from getting blown into the industrial/chemical plants of Porto Marghera.

We rowed by numerous fish-traps and other types of net contraptions.
By this time, we'd been rowing for a few hours and had worked a lot of the bugs out of our system as a group.
Not everybody who rows gondolas solo can fall into place in a team.
I was happy to see that Megan had settled nicely into a groove and had proven herself as a team rower.
Alessandra was serving as our rower a prova (in the front), and this is not a small job.
The "bow man" - as Andrew McHardy calls that position -
sets the tempo that everyone follows.
The front rower is also in communication with the popier, who tells him or her to speed up, slow down, or change the type of stroke.
Alessandra had to do double-duty on this boat because Bepi and I were sharing the role. Half the time the captain was speaking English, the other half Italian, and she ended up translating for one or the other as well.
Bepi was as solid as ever.
As for me, I was feeling great; I felt like I could keep going all day.

Facing the Beast
Our journey to the end of the bridge came to a close and we were ready to be done for the day.
There was plenty of "race" left in the horse, but the "barn was in sight".
The rowing club, the hoists, and the ever-popular bar lay just on the other side of the Liberta bridge.
The orange and blue sandolo took a wide right turn as we lined up with one of the many archways.
We approached the archway and entered the windshadow.
As we rowed closer to the bridge we felt the wind grow stronger as it rushed out of the tunnel-shaped archway.
Nobody was surprised to encounter a literal "wind tunnel"; we were prepared for that and increased our pace.
The stainless steel prong that perches off the tip of the boat pierced it's way into that oncoming rush of air.
All four rowers fought the anticipated headwind, and then, a third of the way through, it happened: everyone lost traction, the tide had joined forces with the wind, and we found ourselves powerless to fight it.
The sandolo slowly lurched to port, the steel ferro piece caught on a stone column, and we were flushed back out the way we came in - steel grinding against stone, rowers dumbfounded.
Within a minute we were fifty feet from the bridge, still drifting further away as individually, and collectively, we tried to wrap our heads around what had just happened.

None of us had anticipated the tide.
I don't know if the water movement was caused by wind, storm surge, or if we were simply fighting a normal tidal movement.

Assuming we'd simply entered the archway unprepared, we aimed our sandolo at it and charged ahead again.
This time everyone knew to expect a lot more from Mother Nature.
We rowed hard, got the boat moving fast, made it halfway through, and then made a second discovery: the water in the middle of the tunnel was shallow - only about two feet deep. As the tide rushed into the shallow area, we ended up with nothing to row against.
It was like trying to run up a down escalator...that was coming at us at high speed.
With nothing to purchase, and our blades bouncing off the bottom half the time, we were once again bested by wind and current.
Again the sandolo careened sideways,
again we were forced out of the passageway,
the only sounds being the grinding of steel against stone and the heavy breathing of four rowers.

Flushed out and shaking our heads for a second time, we were pissed: mad at an unseen beast that seemed to be toying with us.
Nobody was more angry than Bepi, who began relaying his plan loudly to Alessandra, who then replied.
Either it was in dialect or they were speaking too fast for me to understand.
Everyone was excited.
We had an angry lion on the back of the boat who was taking charge and shouting commands.
My daughter, who was sitting on the tail of the boat, was a little scared; the rest of us were ready for one more fighting, spitting, frenzied rush at the beast.
Cassandra moved from the back deck to the front, we lined up the boat and readied ourselves, and Bepi called out the way it was to be done.
Everyone was ready this time.
We knew what we were up against now.
We'd been into that dark cave and encountered the beast twice.
Now it was simply a question of whether we had what it took to prevail.
Our third approach was measured: Alessandra kept her focus on keeping the stroke and timing just right.
Megan and I followed her lead as we approached the archway.
At about ten feet from the mouth Bepi shouted louder than I'd ever heard him;
barking a command in Italian. Everyone went nuts - rowing as hard as possible.
A third of the way in he shouted even louder, and with our adrenaline pumping, we rowed harder, remo blades slapping the water with every frantic stroke.
Halfway through, Bepi shouted louder than I've ever heard anyone shout.
It was like a roar.
The team was still rowing but the current was holding us with a third of the way to go.
Another thirty seconds and we were spent.
With a river rushing beneath us, it was like trying to row in air.
There was no water to push against.
We might as well have been using broom sticks.
Flushed out the back again, this time fending off the ferro, we drifted away from the bridge.
We failed.
If this were a work of fiction, I'd have written it differently, but that's what happened.
I'd like to tell you that we mustered up enough kick from deep within us, or that we did something clever to defeat the beast.
It certainly would make for a great story, but it wouldn't be true.
We got our asses kicked.
Three strikes and we were out.
No effort to "pole our way through" or drag the boat hand-over-hand alongside the archway would have helped.
Blowing wind and rushing water can sometimes just be unbeatable.

There's nothing like getting your hat handed to you to knock you back into reality.
You find yourself re-thinking everything.
It can be humbling. It can be a learning experience. It can be something you look back at and laugh about.
Quite often it ends up being all three. 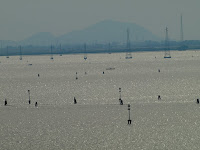 We let the wind and current take us.
the team regained it's composure and found it's rhythm again.
On the back of the boat, Bepi had a plan, but there wasn't much talking at that point.
He told Alessandra that we would go to Marghera. I didn't get everything he said.
Megan and I weren't sure if we were going to hang out in the port until the tide changed, or if there was a way through there.
Megan said to me, "Any idea where we're going?"
My reply: "No idea, but we're sure gettin' there fast".
Rowing with the wind and current allows you to cover a lot of water. It's nice to be able to make that kind of headway, but in the back of your mind, you're thinking "I sure hope we don't have to turn around at some point and fight our way back."

We entered the mouth of the industrial port. As it was Sunday, nobody was around.
Once inside, we fought a light crosswind until we gained cover from some buildings and storage tanks.
Bepi and I rowed tandem for a while, then he and I traded off rowing a poppa while the other three tended to clothing, snacking, and such.
We rowed past state-of-the-art tugboats, heavy equipment of all types, industrial plants that were clean and operational, and some buildings that looked as if they'd been condemned for decades.
Some sprinkles fell a few times, but no real rain.

We kept rowing, taking in the less-than-tourist-grade scenery of oil refineries and storage tanks. It may sound weird, but I had it on my list to one day see this part of the lagoon.
Having grown up near San Pedro, California, such a skyline is quite familiar - it puts me at ease. It reminds me of some places near the old neighborhood.
A strange kind of "comfort food", I know. 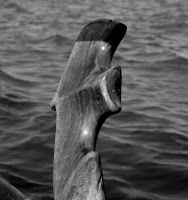 After our impromtu tour of Porto Marghera, we did indeed pass under the highway and end up in the canal by Forte Marghera.
This was familiar; this was the neighborhood; we were in the landing pattern now.
Ironically, the sun broke through for a little while and the rest of the row was routine.

Nobody was there when we arrived at the hoist.
Bepi climbed up and put it into position while the rest of us moved the sandolo into place.
After we put the boat away and grabbed some refreshment, the journey was officially over.
It hadn't gone as planned, but then again, nothing really had that day.
I said at the beginning that I "was in it for the adventure", and by that standard, I sure got what I came for.

Things could have been worse: we could have ended up in the water, swimming around a swamped or broken boat.
There was plenty of that this year.

I learned a long time ago that sometimes you learn more about yourself in defeat than in victory.
We'd set out at the beginning of the day with a specific goal: to finish the Vogalonga.
And while that wasn't in the cards for us this year, we had a great adventure - one that I'll never forget.
Friendships were forged and we all came away with a great story to tell. 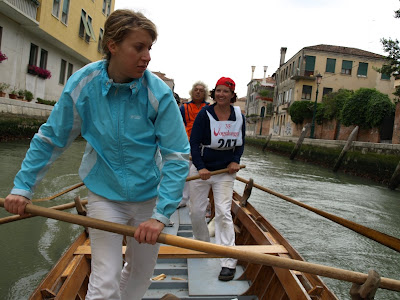 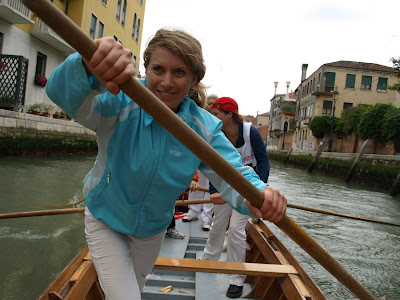 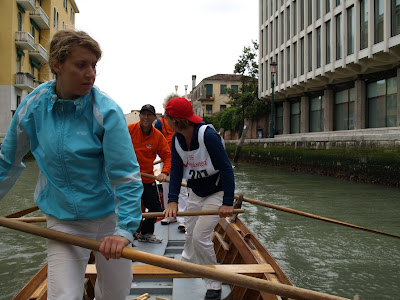 Must have items for next year's Vogalonga:

Reading your account of our adventure has been wonderful- thank you so much for the time you have put in to recounting so many details- I was right there, all over again!!!