The Fastest Horse on the Course 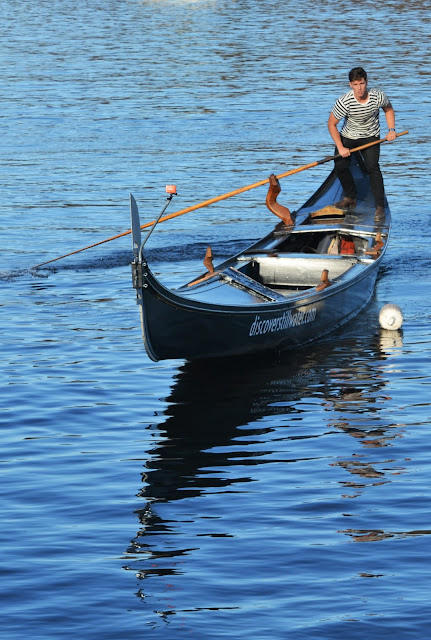 In the month leading up to the US Gondola Nationals this year,
I was on the phone with Marcello of La Gondola in Providence.
We were talking about the various events,
and who was on "Team Providence" this year.
I was sad to hear that one of my favorite gondoliers:
"Rafaelo" - would not be able to make it.
He'd just gotten married, so I understood,
but I had still hoped that we might see him.
Marcello went on to tell me about this new guy who he felt would do well.
He was new, but had done a lot of rowing in the 2016 season.
Harrison "Mariano" Young is 19 as of this writing.
He started as a gondolier in Providence last year,
only beginning to take cruises later in the season.
This year he got a full season of rowing. 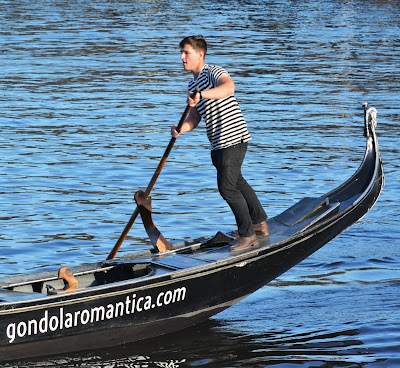 Prior to Nationals, Owner of La Gondola, Marcello,
told him that he stood a decent chance of getting a medal.
Marcello knew the kid had what it would take to do well.
This young gondolier had played football, and lived in a Spartan houseboat where a weight bench was the main attraction.
Among the gondoliers in Providence, some guys row further than others.
They have a "down and back" type of route,
where the gondoliers take their passengers to a certain point,
then turn around and head back towards the dock.
The harder you row, the further you can get before having to turn around.
So some of the gondoliers this past year made it a point to row further with each cruise - and in doing so, got themselves in better shape for the races in Minnesota.
Over the years we've noticed that any time there's a slalom or obstacle course in the competition, the top finishers are mostly from Providence.
They operate in a tight channel, which is peppered with flaming pots of firewood running down the center.
Row in Providence, and you'll get skilled at rowing around obstacles
(flaming ones, at that!).
As Mariano positioned his boat to begin his run in the Solo Slalom event,
I wasn't expecting him to be very successful.
He was new to Nationals, and I hadn't seen him do much other than train with the Providence four-man team on Friday night.
I figured he'd do ok, but didn't think he'd finish that well.
I could not have been more wrong. 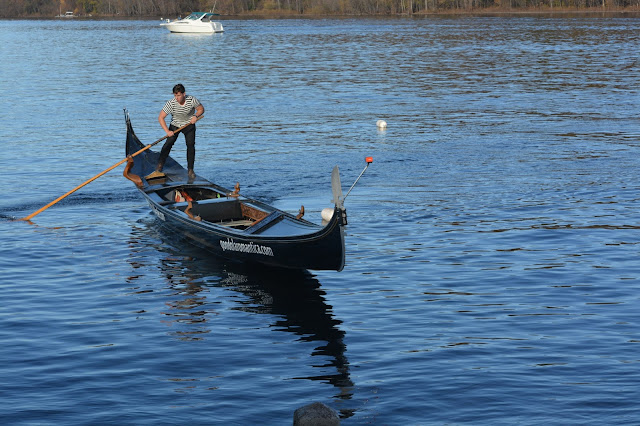 Mariano came to life on that course,
rowing hard, turning the gondola around markers like a pro,
and using his explosive power to accelerate after each turn.
And yet, his run was not showy.
It went by quietly - but quickly. 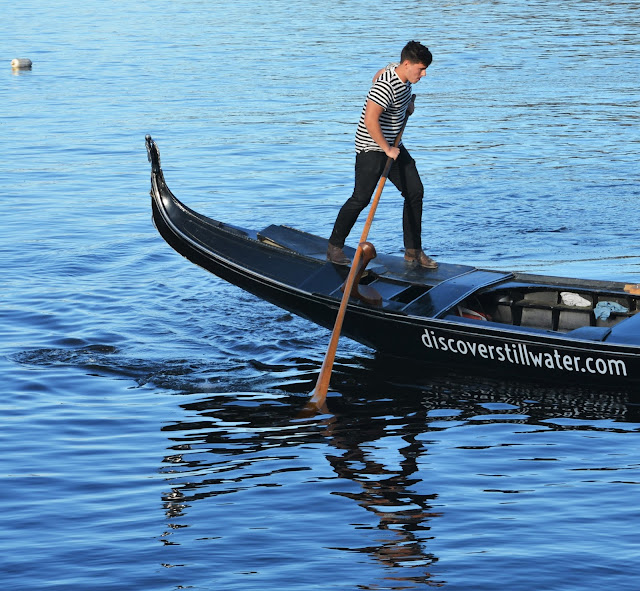 About halfway through his trip up the course,
I turned around to talk to someone. The next thing I knew,
the guy was already working his way back towards the finish line,
and people were cheering and shouting from the shoreline.
Marcello was at the timekeeper's station,
and he was shouting directions to his young gondolier.
Mariano powered his way across the finish line with his fellow gondoliers yelling and lots of cheering filling the air. 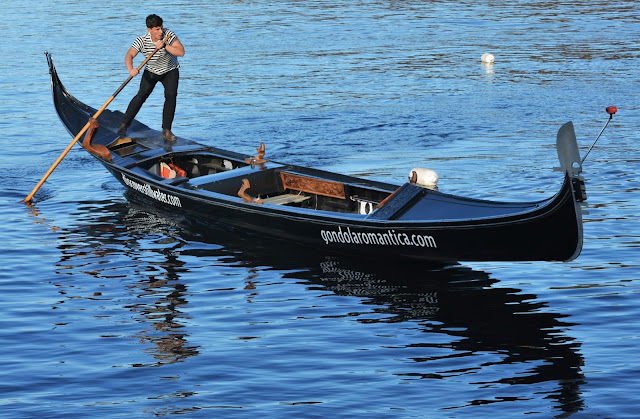 Marcello held up his hand with one finger in the air - to signal that he was number one.
Mariano was surprised and yet thrilled.
Nobody rowed that course faster.
And on Sunday night, this kid who'd never competed at nationals before,
had a gold medal placed around his neck. 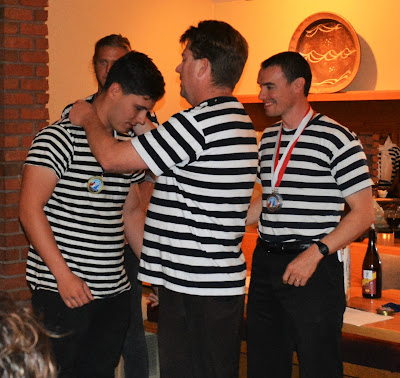 Mark Schooling placed the medal,
but Marcello was the one who congratulated him. 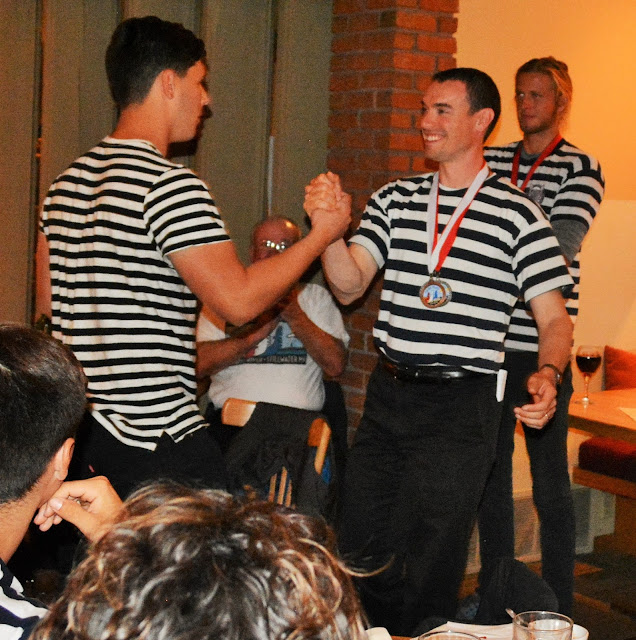 Honestly, I had expected Marcello to win this event,
but I wasn't surprised that one of his other gondoliers took the gold. 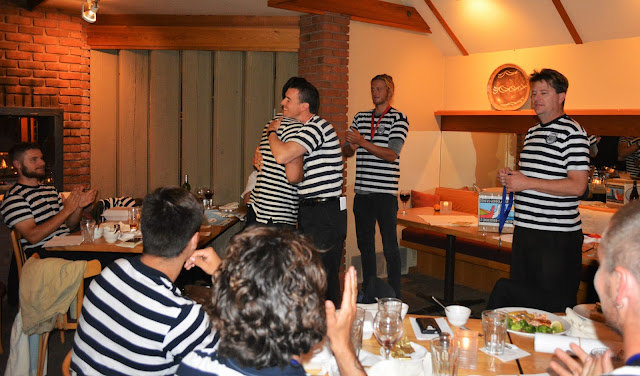 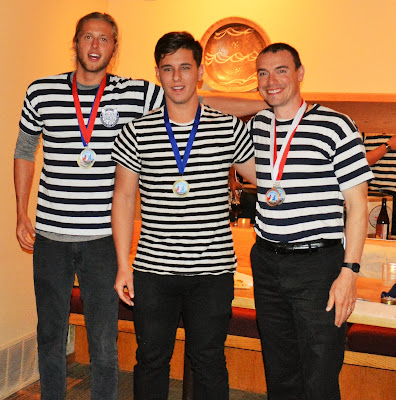 After the race was over, and Mariano had finished the fastest,
I was amazed, and I asked Marcello why he thought his young gondolier had done so well.
He said:
"He rowed over 540 cruises this season,
he's a horse,
and he takes instructions well"

The winner of the solo slalom event this year did take instructions well.
He had rowed a lot of cruises
(and chose the long route each and every time).

With football, weight lifting, and a solid and stout build,
Mariano was indeed a "horse"...

He was the fastest horse on the course.